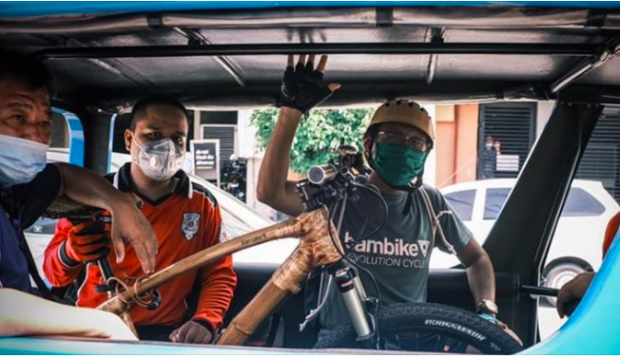 Journalist Howie Severino (right) on board the QC government official vehicle with his bamboo-made mountain bike after being accosted for putting down his mask after drinking from his water bottle in Quezon City. Photo by Luis Liwanag

MANILA, Philippines — Journalist Howie Severino was apprehended by government authorities in Quezon City for “improper wearing of mask” but was freed after his reason was justified: He has to drink water, an official of the city’s Department of Public Order and Safety (DPOS) said Wednesday.

In a phone interview with reporters, DPOS General Elmo San Diego said his men were conducting a “one-time big-time” operation to apprehend quarantine violators on Mother Ignacia when they saw Severino pull down his mask.

(Howie’s mask was pulled down. For us, improper wearing of masks is tantamount to no mask.)

San Diego said his men brought Severino to Amoranto Sports Complex in Diliman where violators are being detained.

He said Severino explained his side to the DPOS personnel, saying he pulled out his mask to drink water after a bike ride.

(At the time of apprehension, the water was already at the holder but Severino said ‘I was about to put back my mask on’ so when he was asked, ‘did you put it down?’ Severino said, ‘because I was drinking water.’)

“That is a valid reason so apparently tama yung sinabi niya so nirelease siya di na siya kinasuhan,” he added.

(That is a valid reason so apparently what he said was true so we released him and he was not charged.)

There were no issues between Severino and apprehending officers, San Diego also noted.

(I see no problem on both sides. There is no issue with that. If a complaint will be filed, let it be. We will answer that.)

Severino, on his part, explained that he went biking with his friends on Mother Ignacia when they stopped to buy some drinks. He said they were all practicing social distancing while they were drinking.

“We were all wearing masks. We bought drinks at the store next door, and drank them after pulling down our masks below the mouth (because we have not learned to drink yet with masks on). We were all outdoors where the risk of infection is much lower than indoors and maintained at least four feet distance from each other,” he wrote in a Facebook post.

To set some things straight, because those who briefly detained me during my bike ride have been getting bashed…

After the apprehension, Severino said he even offered to give a talk at the Amoranto Sports Complex but instead he was allowed to go home.

“I am kind of glad that as QC is an epicenter of the disease in the Philippines, they are finally doing something, even if it’s a bit draconian. I even offered to give a talk at the seminar. Instead they returned my bike and told me I could go home,” he said.