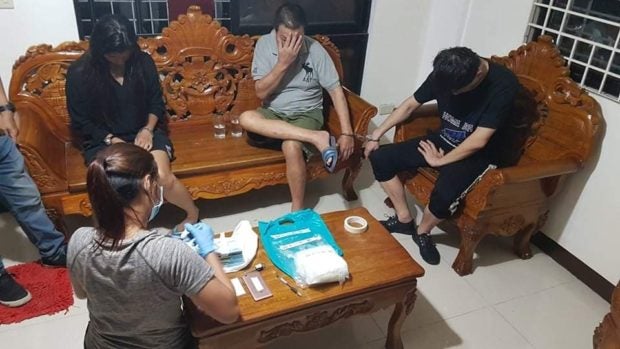 Authorities on Tuesday arrested two Chinese nationals and their Filipino companion during a buy-bust operation in Sta. Maria, Bulacan. Seized from them were P6.8-million worth of “shabu” (crystal meth). Photo from Bulacan police

CAMP GEN. ALEJO SANTOS, Bulacan –– Two Chinese nationals were arrested while P6.8-million worth of “shabu” (crystal meth) were seized in a joint buy-bust operation by the Philippine Drug Enforcement Agency and local police on Tuesday night.

The drug sting inside the suspects’ house at Barangay Caysio in Sta Maria town shortly before midnight yielded one kilogram of shabu.

Also seized during the operation were a mobile phone, a Toyota Camry, a Bureau of Internal Revenue identification card, and passports. —Carmela Reyes-Estrope