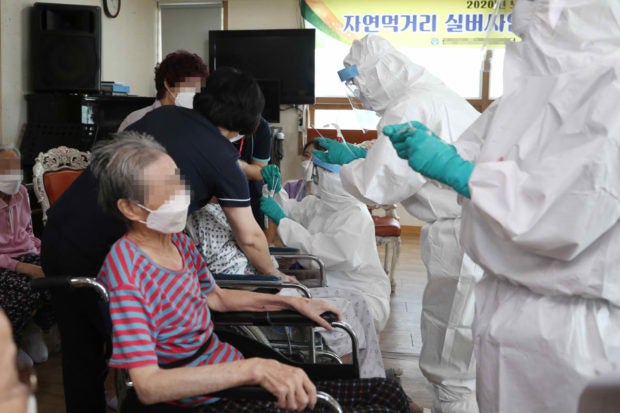 SEOUL — South Korea’s daily new COVID-19 cases bounced back to above 60 Wednesday, with the record number of imported cases in about three months.

Of the 63 new cases, 33 cases were imported and the rest locally transmitted, with the country’s total caseload at 13,224, according to the Korea Centers for Disease Control and Prevention.

Of the imported cases, 11 people were detected during the quarantine screening process at the border and the rest while under home quarantine after arrival.

The country has posted a double-digit number of imported cases for 13 consecutive days. The newly identified cases coming in from overseas mark the highest since April 5, when the reading was 40.

Health authorities, however, have been less concerned about the imported cases as they are detected either at the border or while under the mandatory two-week isolation upon their entry – all under the government’s watch.

As for locally transmitted cases, 11 cases were registered in Gyeonggi Province. Seven were report in Gwangju in connection with a previously identified Buddhist temple cluster. Five cases were reported in Seoul, three in South Chungcheong Province, two in Daejeon and one each in Incheon and South Jeolla Province, according to the KCDC.

So far, 11,970 people, or 90.4 percent, have been released from quarantine after making full recoveries, up 56 from a day earlier. Some 989 people are receiving medical treatment under quarantine.

The death toll remains unchanged at 285. The overall fatality rate stands at 2.15 percent, though it is much higher for those in their 80s or over at 24.82 percent and those in their 70s at 9.37 percent.