UNITED NATIONS — Russia and China on Tuesday vetoed a UN Security Council resolution that would have extended authorization for cross-border humanitarian aid in Syria for a year. 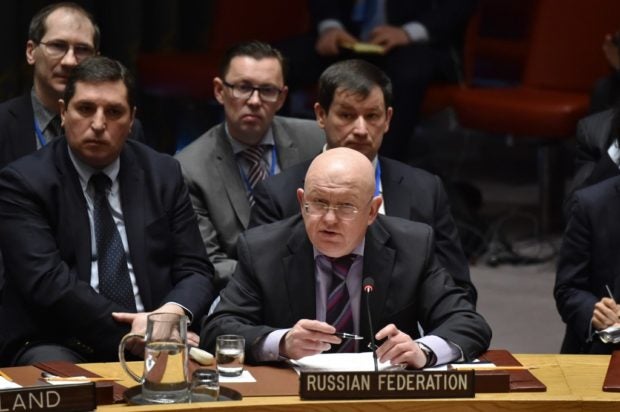 Russian Ambassador to the United Nations Vassily Nebenzia during a UN Security Council meeting, at United Nations Headquarters in New York, on April 10, 2018. Russia on Tuesday vetoed a US-drafted United Nations Security Council resolution that would have set up an investigation into chemical weapons use in Syria following the alleged toxic gas attack in Douma. It was the 12th time that Russia has used its veto power at the council to block action targeting its Syrian ally. Photo by HECTOR RETAMAL / AFP

Germany and Belgium, two of the council’s non-permanent members, had drafted the resolution, which would have allowed aid to continue to pass through two points on the Turkish border without interference from Damascus.

Beyond Russia and China, the other 13 members of the council voted to approve the draft, the diplomats said.

During negotiations, Moscow had asked that the extension be limited to six months, rather than a year, and that it only be allowed at one border crossing, not two, they said.

“The draft resolution has not been adopted,” Germany’s UN ambassador Christoph Heusgen, the acting president of the body in July, confirmed in a letter to Council members.

Immediately after the vote, Russia proposed its own draft resolution — featuring its preferred terms.

The Russian draft, obtained by AFP, underlines the improvement in the delivery of humanitarian aid under the control of the Syrian regime, and excludes one of the two entry points into Syria — Bab al-Salam — from the mechanism.

The results of a vote on that resolution will be known on Wednesday.

Authorization for cross-border humanitarian aid has existed since 2014, with periodic extensions. The latest extension expires on Friday.

Tuesday’s vote was the 15th time that Russia has used its veto since the start of the Syrian war in 2011.

It was an “extremely negative development,” one European diplomat said on condition of anonymity.

“Insisting on only one crossing point is cynical and it doesn’t meet the needs of the people,” the source said.

The Bab al-Hawa crossing point allows for shipments of humanitarian aid to the three to four million people living in the opposition-held Idlib region.

The International Rescue Committee was also quick to condemn the veto.

“Blocking access to food, health care supplies, vaccines, and ventilators is unacceptable anytime but in the year of COVID-19, it is even more reprehensible,” said IRC president David Miliband in a statement.

In January, Moscow, Syria’s closest ally, succeeded in having the crossing points reduced from four to two and in limiting the authorization to six months instead of a year, as had been done previously.

Russia, like China, argues that the UN authorization violates Syria’s sovereignty and that the aid could be distributed by the Syrian authorities.

Western nations and the UN secretariat reject that argument, insisting that the cross-border aid is the only credible option, and that the flow of relief supplies would face multiple obstacles if it had to pass through Damascus’ control.

In a report in late June, UN Secretary-General Antonio Guterres called for a one-year extension of the use of the two crossing points.

According to a report published by the UN in Geneva on Tuesday, the humanitarian situation in Idlib province is disastrous.

“Syria’s economy is devastated,” said Hanny Megally, one of the authors of the report.

“The country has been in a nine-year conflict. People are suffering.”

Quarantine classifications for December out on Nov. 30 —Palace

De Lima writes to Biden, says his triumph over Trump a ‘beacon’ for PH democracy