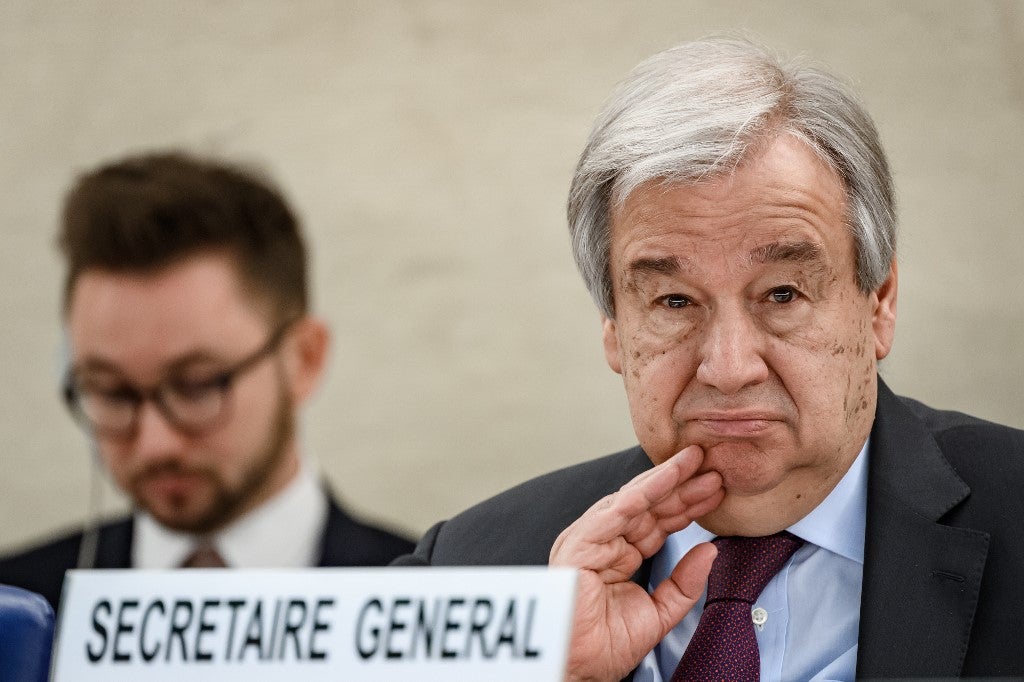 The U.N. chief said it’s too early to fully assess the implications of the coronavirus pandemic on terrorism, but all these groups seek to exploit divisions, local conflicts, failures in governing, and other grievances to advance their aims.

Guterres told the launch of United Nations Counter-Terrorism Week that the Islamic State group, which once controlled a vast swath of Syria and Iraq, is trying to reassert itself in both countries, “while thousands of foreign terrorist fighters battle in the region.”

“The pandemic has also highlighted vulnerabilities to new and emerging forms of terrorism, such as misuse of digital technology, cyber attacks and bio-terrorism,” he said.

Josep Borrell, the European Union’s top diplomat, told the virtual meeting that a global understanding of the pandemic’s implications on counter-terrorism efforts across the world is needed.

“It is true that, in some places, the crisis has led to a reduction of terrorist activity, mainly due to the mobilization of state security services,” he said. “But in other regions, terrorism and human suffering caused by it continue unabated.”

Former American diplomat Richard Haas, who heads the Council on Foreign Relations, said he believes COVID-19 “will add to the challenges of counter-terrorism.”

“It will perhaps create an environment where more countries become weak or fail,” he said, and recruitment for terrorist organizations will quite possibly go up.

Tunisia’s U.N. Ambassador Kais Kabtani, who chairs the U.N. Security Council’s counter-terrorism committee, said its recent report on COVID-19 described how the pandemic may have temporarily limited operations of terrorist groups because of lockdowns and travel restrictions — but also how groups including the Islamic State are exploiting increased social isolation and online use “to spread their propaganda through virtual platforms.”

The report by the committee’s executive directorate said the global population, including over 1 billion students, is spending more time on the internet as a result of COVID-19.

“The increase in the number of young people engaging in unsupervised Internet usage – particularly on gaming platforms – offers terrorist groups an opportunity to expose a greater number of people to their ideas, although the relationship between online activity and radicalization to violence is not fully understood,” the experts’ report said. “The reported rise in cyber crime could also lead to increased connectivity between terrorist and criminal actors.”

The U.N. experts said a wide variety of terrorist groups have already integrated COVID-19 into their propaganda “to exploit divisions and weaknesses among their enemies” including by intensifying hatred for certain groups, “resulting in racist, anti-Semitic, Islamophobic and anti-immigrant hate speech.”

“These narratives have been fused with an array of new or existing conspiracy theories, particularly by the extreme right, including through the linkage of 5G technology to the spread of the virus,” the experts said.

On the negative side, they said the pandemic in addition to limiting the movement of terrorists may disrupt their supply chains making it difficult for them to get food, medicine, money and weapons.

With the overwhelming global focus on COVID-19, the experts said terrorists may seek “even more `attention grabbing’ targets or techniques — as with the May 2020 attack on a maternity hospital in Afghanistan.”

Read Next
4 village watchmen in killing of soldier, militiamen in Basilan surrender
EDITORS' PICK
Water remains our saving grace right now
BREAKING: 3,226 latest COVID-19 cases bring PH’s total to 106,330
Smart 5G goes live
A gem of a residence in the new normal
PNP: Checkpoints back in MECQ areas
Been there, done that but what’s the difference between MECQ and GCQ?
MOST READ
Metro Manila, 4 other areas back on lockdown
MECQ guidelines in infographics
You’re my ‘idol’ in crafting laws, neophyte senator ‘Bato’ tells Drilon
Citing Duterte order, Lorenzana says PH won’t join other navies in South China Sea drills
Don't miss out on the latest news and information.