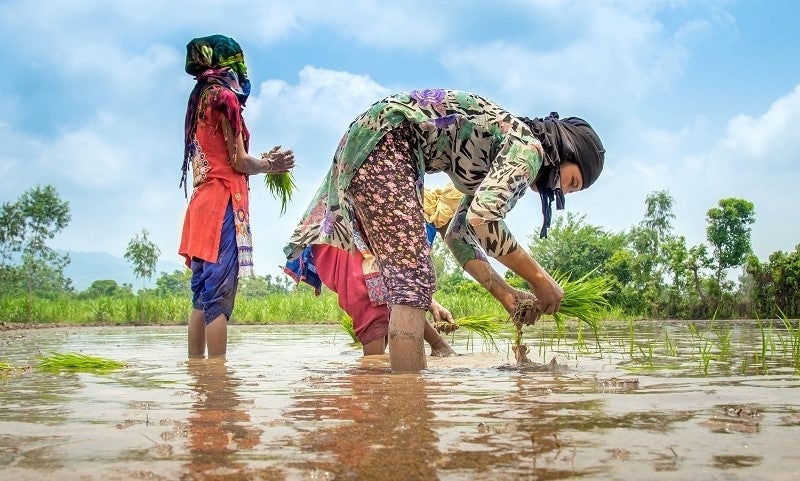 ISLAMABAD — The southwest monsoon has arrived in most parts of South Asia and farmers in India, Pakistan, Bangladesh and Nepal have started planting the summer crop. The Covid-19 pandemic has affected the already distressed agriculture sector in these countries in different ways, and the stakes couldn’t be higher for farmers in this cropping season.

Covid-19 has already afflicted more than a million people in the four countries, with infections rising fast in India, Pakistan and Bangladesh, latest data shows. South Asia has taken a beating from the lockdowns imposed to curb the spread of the virus, and with growth shrinking in the industrial and services sectors, hope is now pinned on adequate monsoon rainfall and farmers gathering a good harvest to breathe life back into the battered economies.

Although the share of agriculture in national GDPs varies from 25% in Nepal to 13% in Bangladesh, farming provides a livelihood to the vast majority of the countries’ working populations.

As the pandemic-forced lockdowns disrupted labour mobility and vehicular transportation, farmers have struggled to harvest and sell the winter crop, leading to widespread losses across the subcontinent. “In the past few months, I have fed vegetables from the farm to the livestock as I couldn’t sell them,” said Ishwar Acharya, a farmer from Morang district in eastern Nepal.

As the summer sowing season approached, scarcities in farm inputs were reported, and prices rose. “Cost of seeds in Jharkhand and Bihar have increased by as much as 15% to 25%, which has led to difficulties for small and marginal farmers,” said Ranchi-based Ashok Kumar of Transform Rural India Foundation (Trif), a non-profit that works in the poorest states of India.

Big farmers in India’s breadbasket in Punjab, Haryana and western Uttar Pradesh are better insulated from such price shocks as they are able to place bulk orders in advance, said New Delhi-based Satyabrata Acharyya of Professional Assistance for Development Action (Pradan), a rural grassroots organization.

Prices of farm inputs have risen in southern India as well. However, farmer producer organizations have intervened significantly in Andhra Pradesh, Telangana and Karnataka so that cultivators have not been short on seeds, according to Ravindra Adusimilli of Hyderabad-based Watershed Support Services and Activities Network (Wassan).

In Pakistan, prices of farm inputs have increased significantly, farmers said. Pakistan imports large amounts of chemicals for fertilizers and pesticides, and the supply chain disruption caused by the pandemic has led to price increases. This will eat into the margins of smallholder and middle farmers, according to Waqas Gondal, a farmer from south Punjab .

The government has, however, provided some financial assistance to farmers to buy inputs. Cultivators will also soon get relief in energy costs, which account for 30% of all inputs, according to Khalid Jamil of the National Agriculture Research Centre (Narc).

In Nepal, there is an acute scarcity of fertilizers. The Himalayan nation imports nearly all of its chemical fertilizers, mostly from the Middle East and China via India’s ports. Some 50,000 tonnes of fertilisers are stuck in the port of Kolkata and 21,000 tonnes in Kandla’s port in Gujarat, according to Nepal’s farm ministry.

“It will take more than a month to bring the stuck fertilizers,” the ministry said in a press statement. The government aims to sell nearly half a million tonnes of subsidized fertilizers to farmers this year to tide them over the Covid-19 crisis.

“If you ask a supplier for urea, the answer would be, we don’t have it now. If you ask for Diammonium Phosphate (Dap), you would be told to wait a couple of weeks,” said Acharya, the farmer from eastern Nepal. “Only about 25% is provided, and that too after queuing up for two weeks at least.”

“The worst part is that farmers cannot determine their prices; the middleman does that,” said Aamer Hayat Bhandara, a farmer from Punjab’s Pakpattan district. “And the government has a terrible role in this. It gives zero security to farmers.” Instead of giving farmers a little bit of extra money during the crisis, the government opened the market for importers, he alleged.

To add to the woes, the huge migrant labour force that works in cities returned to their villages and, in the absence of gainful employment, used up precious savings that would have been invested in cultivating the summer crop.

In Pakistan, expectations of farmers who grow rice, corn, cotton and sugar during the monsoon are running low. “Take cotton, our major crop that runs our entire textile industry. In this fiscal year, nothing has been kept aside for cotton,” said Bhandara. “There is no development even though the prime minister had been willing to revive the crop once upon a time.” Even the target of 2.8% of the national budget for agricultural development this fiscal year is lower than usual, he said.

In India and Pakistan, a plague of locusts has further decimated crops. Authorities haven’t ruled out the threat of locusts swarming again in July.

The lockdown in South Asia led to a mass exodus of migrant laborers to villages, which resulted in labour scarcity in some areas and excess in others.

In the poorer states of India such as Jharkhand in the east, which is home to a large number of migrant laborers, the recent influx has led to a surplus. Villages in Bangladesh and Nepal, too, are flush with returned migrants.

While this is good news for landholders, the same cannot be said of temporary farmhands because wages have crashed. In Bangladesh, for instance, farm wages have been rising steadily in the past decade, said Abdur Razzak, a farmer from the northern district of Rangpur. “It was tough to get adequate numbers of them when it was required,” he said.

The situation has dramatically changed in recent weeks, according to Razzak. “Many of them who migrated from the village to urban areas are returning to villages, so wages have gone down,” he said.

The same holds true in the poorer provinces in eastern India, said Kumar of Trif.

On the other hand, farmers with large landholdings in the breadbaskets of India and Pakistan are facing a labour shortage. In Indian Punjab, for instance, farmers’ groups are ferrying farmhands back to the state. Since paddy sowing depends heavily on manual labour, the shortage due to the earlier exodus has led to a rise in wages, which will impact profit margins, farmers say.

Despite the farming lifeline the monsoon extends to South Asia, it also exacts a heavy price during floods. Although the 2020 southwest monsoon has just about started, heavy rains are already flooding large parts of Assam, Meghalaya, northern Bangladesh, Bhutan, Sikkim and Nepal. Some 50 people have been killed in these parts of South Asia, including 23 in Assam and 18 in Nepal.

Farmers in flood-prone Bangladesh are bracing themselves. “In case of Aman, I have been cultivating flood-resistant varieties for two years,” said Akram Hossain, a farmer from Lalmonirhat district in the Teesta river basin. Aman is the principal paddy variety grown in Bangladesh and eastern India at this time of the year.

Farmers in the Indian state of Bihar are less prepared to face floods than they are in normal years. The Covid-19 pandemic has delayed flood-control preparations, with nearly 30% of embankment repair and anti-erosion works incomplete. The state government has just started a Twitter handle through which it is inviting citizens to inform the authorities if any embankment is breached.