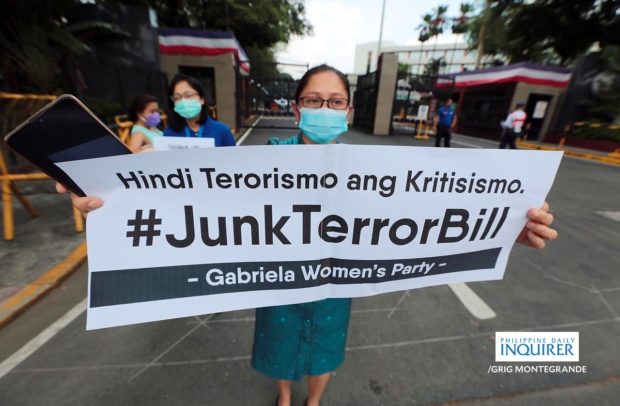 Progressive groups stage a protest and noise barrage outside the House of Representatives on Wednesday, June 3 to demand the scrapping of the anti-terrorism bill which Congress approved in its 2nd reading on Tuesday. INQUIRER FILE PHOTO / GRIG C. MONTEGRANDE

MANILA, Philippines — Framers of the 1987 Constitution on Monday stood against the recently-signed anti-terror law, saying that it puts the country on a “slippery slope to authoritarianism.”

“The Anti-Terrorism Act gives unprecedented powers to the administration. And we may already be on a slippery slope to authoritarianism,” a statement signed by Felicitas Arroyo, Teodoro Bacani, Florangel Rosario Braid, Edmundo Garcia, Christian Monsod, Chito Gascon and Bernardo Villegas said.

The framers pointed out that the 1987 Constitution deleted “a weapon wielded by the dictatorship to issue arrest, search and seizure orders against its perceived critics,” referring to the dreaded Arrest, Search, and Seizure Orders or ASSO during the regime of the late dictator Ferdinand Marcos.

“Through the Anti-Terrorism Council in RA 11479, we may be unwitting witnesses to a return to a past of unwelcome experiences,” the framers said.

The new law seeks to strengthen the Human Security Act of 2007 and criminalizes incitement of terrorism “by means of speeches, proclamations, writings, emblems, banners, or other representations.”

It also allows the detention of suspects for up to 24 days without charge and empowers an anti-terrorism council to designate suspects or groups as suspected terrorists who could be subjected to arrests and surveillance.

But the framers noted that the Anti-Terrorism Act “does not provide the accused the opportunity to present evidence to the contrary in a fair hearing since the Council is empowered to unilaterally designate the accused already a “terrorist” even prior to a court determination.”

They stressed that the Constitution rests on the foundations of a Bill of Rights that protect free speech and the right to peaceable assembly and to form associations.

“However, RA 11479  poses serious mishaps to the cause of civil liberties. Those who differ will be branded as recalcitrants and their silencing would have a deceptive justification,” the framers said.

“This law precisely creates a climate of fear, sends a chilling effect, on those who wish to express their legitimate grievances, state their aspirations, and wish to engage in open and democratic debate, and threatens the rights of associations who may wish to dissent and question the actuations of those in power.”

The Constitutional framers said they believe that the Philippines do need another law against terrorism.

“We need to move forward, not backwards. We need to focus on what truly ails our people in their struggle for survival, while we deal with an adequate public healthsystem, mass poverty, gross inequalities, and not squander this unique opportunity of coming together as a people in the time of the pandemic,” the framers noted.

At least three petitions have been filed before the Supreme Court seeking to declare either parts or the entirety of the anti-terror law unconstitutional.