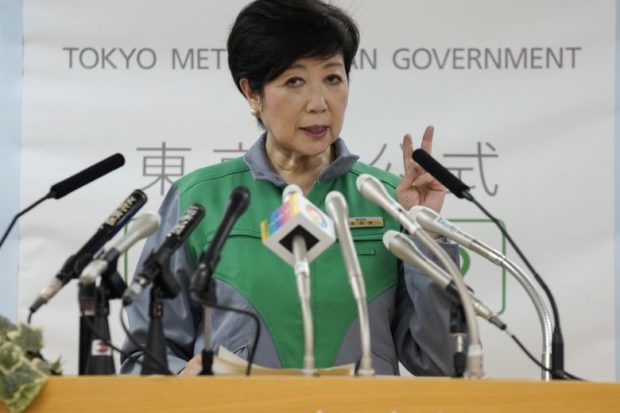 TOKYO — Tokyo governor Yuriko Koike was returned to a second term in office on Sunday (July 5) with heavy bipartisan support across gender and age groups in a thrashing for her 21 contenders.

The 67-year-old, who is Tokyo’s first female leader, clinched more than 3.5 million votes with 95 percent of the votes counted as of press time last night. This was 4.3 times the 820,000 votes that her nearest challenger, lawyer Kenji Utsunomiya, 73, managed.

Due to the unfurling Covid-19 pandemic, with Tokyo recording 111 new cases on Sunday in the fourth straight day the tally topped 100, her triumph was not marked with the traditional “banzai” (hooray) cheers in front of supporters.

“I cannot feel completely happy (with this victory) as Tokyo is in the middle of a pandemic,” Ms Koike, formerly defense and environment minister, told a televised news conference.

She stressed that the recent resurgence in cases was due to more aggressive testing in nightlife districts. About 70 percent of the recently infected are in their 20s or 30s with mild or no symptoms, and were either employees or visitors at nightlife entertainment districts, including Shinjuku and Ikebukuro.

This is unlike the previous spike in April where medical institutions were at risk of being overwhelmed with severely-ill elderly patients, and does not count as a second wave of infections, she said.

Still, Ms Koike has urged Tokyo residents to avoid unnecessary travel to other prefectures after cases linked to the city were found in Fukushima and Tottori, even as she was not considering any renewed business closure requests just as Tokyo reopens.

Ms Koike also stopped short of guaranteeing that the Olympic and Paralympic Games, which have been postponed to next year, will go ahead. But she said she will iron out the best way forward with stakeholders, including the International Olympic Committee.

A poll by public broadcaster NHK on Sunday showed 36 percent of voters feel the Games should be scrapped, outpacing the 27 percent who thought they should go ahead.

Tokyo 2020 president Yoshiro Mori said of Ms Koike’s victory: “We are aiming for a simplified Games befitting a new era after going through these challenging times. We have thus begun thorough discussions with stakeholders regarding streamlining and optimization.”

Sunday’s election to choose who leads Tokyo, a sprawling metropolis of 14 million residents and an economy the size of Indonesia’s, was Japan’s largest since the Covid-19 outbreak.

Voter turnout was 55 per cent, down 4.73 percentage points from the last poll in 2016. About 15 per cent cast their ballots ahead of polling day, as they were urged, to avoid congested stations.

Other safeguards for those who voted on Sunday included social distancing measures. Voters were also urged to bring their own stationery, though those who did not could use the provided pencils which were sanitized after every use.

Ms Koike, who broke from the ruling Liberal Democratic Party (LDP) in 2016, ran as an independent and won despite a spotty track record with critics pointing to how she has mixed results despite being adept at creating catchy slogans.

The fate of the site of the Tsukiji fish market is still up in the air years after its relocation to Toyosu, while she has not managed to slash the Olympics’ ballooning budget.

She also did not eliminate waiting lists at childcare centers – a campaign promise at the 2016 election – though the list has been cut by 70 per cent.

But in casting herself as a renegade against the establishment, she has won praise for her handling of the Covid-19 pandemic and appeared more decisive than the national government, whose response she has criticized as waffling.

In her new term, Ms Koike wants to create a Tokyo version of the United States’ Centers for Disease Control, and grow Tokyo’s status as a financial hub.

Sophia University political scientist Koichi Nakano told The Straits Times that Ms Koike has clearly benefited from her incumbent advantage, while her challengers, in comparison, were “really struggling to gain any attention at all”, he said.

He also noted that Ms Koike has made no secret of her ambitions for a return to national politics.

“Being Tokyo Governor gives her a lot of publicity, and it’s for her to choose the best timing to see when she has built enough political capital to stage a comeback on the national stage,” he said, though he saw this to be unlikely on the LDP ticket if she does not mend fences.