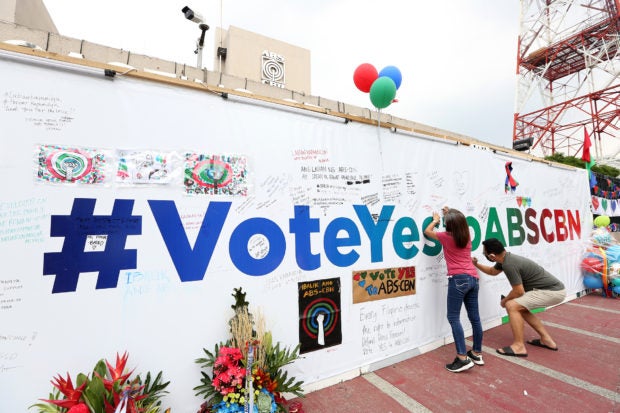 COLLECTIVE VOICE Supporters of ABS-CBN write messages of hope and encouragement on a freedom wall installed in front of the TV giant’s office in Quezon City on Sunday. —NIÑO JESUS ORBETA

MANILA, Philippines — ABS-CBN’s purported “political bias,” which had angered President Rodrigo Duterte and his allies, is the final item on the agenda as a joint House panel wraps up its deliberation on the shuttered media giant’s application for a new franchise.

But it shall depend on the direction of Monday’s discussion whether the House legislative franchises panel would be able to put the matter to a vote within the week, its chair Palawan Rep. Franz Alvarez said.

For this week, the 12th and 13th hearing on ABS-CBN will be at 1 p.m. on Monday and Wednesday, respectively.

Though the inquiry is jointly conducted by the Alvarez panel and the good government committee, the decision whether to grant the network a fresh 25-year license shall rest with the 46 members of the franchise panel, along with 44 House officials who are considered ex officio members.

If the members vote no, that would be the end of the line for the Lopez-owned conglomerate, at least for the duration of the Duterte administration.

If they vote yes, ABS-CBN’s franchise will be subject to debate on the plenary floor by the entire 302-member chamber.

But that would happen after Congress resumes its session in the morning of July 27, the same day Mr. Duterte delivers his fifth and penultimate State of the Nation Address, Alvarez said.

ABS-CBN was forced to shut down its TV and radio operations on May 5, a day after its franchise expired, on orders of the National Telecommunications Commission. The final item will focus on the network’s supposed partisanship.

The Makati Business Club (MBC) has reiterated its call to lawmakers to renew the franchise of ABS-CBN.

The MBC emphasized that ABS-CBN was important for businesses, too, since it is a major platform for them to advertise their goods and services, which would help revive the economy and raise taxes.

The Bishops-Businessmen’s Conference for Human Development also urged the renewal of ABS-CBN’s franchise, as it said the latest threat to press freedom and even the signing of the antiterrorism bill caused “disunity at a time when the country can least afford it.”