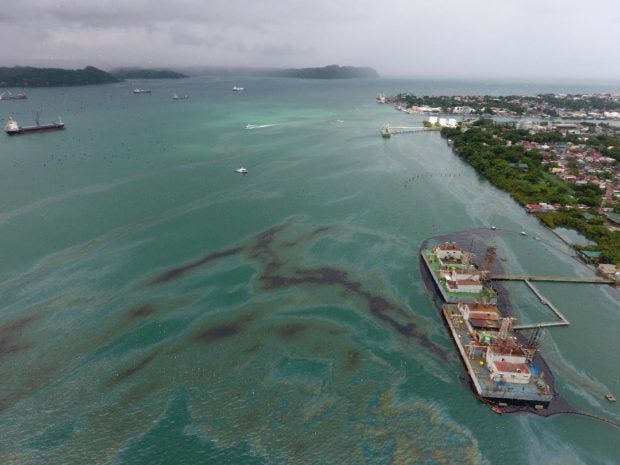 MANILA, Philippines — The Department of Environment and Natural Resources will issue a notice of violation of the Philippine Clean Water Act to the company operating the power barge that exploded and spilled oil off the coast of Iloilo City on Friday.

Environment Undersecretary Benny Antiporda on Sunday said a technical conference would be called to look into the cleanup of the oil spill, which had spread to an area estimated to be as wide as 1,200 square meters as of Saturday evening.

He said the matter would then be endorsed to the Pollution Adjudication Board of the Environmental Management Bureau for computation of fines against Ayala-owned AC Energy Corp., which operates Power Barge 102 docked at Barangay Barrio Obrero in Iloilo City’s Lapuz District.

An explosion from Barge 102 on Friday afternoon tore a 30-centimeter hole on the hull of the barge, spilling an estimated 251,000 liters of fuel by Saturday morning.

Nobody was injured, but by Sunday morning, about 400 residents were evacuated amid the spreading smoke from the bunker fuel, according to the Iloilo City Risk Reduction Management Office.

Some 179,300 liters of bunker fuel were collected from the water’s surface on Sunday, according to a report by the Coast Guard station in Iloilo.

Joe Luviz Mercurio, Coast Guard station commander in Iloilo, said the cleanup would take at least two weeks.In a statement on Saturday, AC Energy Corp. said it immediately undertook containment procedures, but “high ocean waves” caused some of the oil to spill beyond its area.

With the help of the Coast Guard, the company began operations to recover spilled oil from the water’s surface. 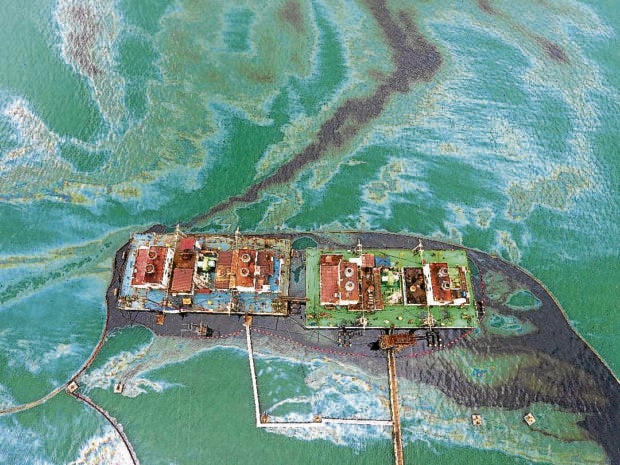 CLEANUP Authorities are racing against time to contain an oil spill in the waters off Barangay Barrio Obrero in Iloilo City after a power barge operated by AC Energy Corp. exploded on Friday afternoon. Smoke from the bunker fuel has forced the evacuation of some 400 residents. —PHOTO COURTESY OF LEO SOLINAP

“We will provide assistance so that the affected families are taken care of,” said Gabino Ramon Mejia, head of the company’s plant operations.

Mejia said the company was willing to provide compensation for the evacuated residents. AC Energy Corp. also said it had provided water, food, folding beds, blankets and pillows to them.

Commodore Armand Balilo, spokesperson for the Coast Guard, said a team had been formed “to gather information and evidence and file a case if there is a basis.”

The oil spill is the worst environmental calamity since 2006 when 2.1 million liters of bunker fuel were spilled in the waters of Guimaras after a tanker sank in stormy seas southeast of the island-province.

The oil spill devastated the livelihood of Guimaras residents dependent on fishing and shell-gathering. It is considered the country’s worst marine disaster after it destroyed hundreds of hectares of mangroves, sea grass, corals, coastline, coral reefs, seaweeds and fishponds.