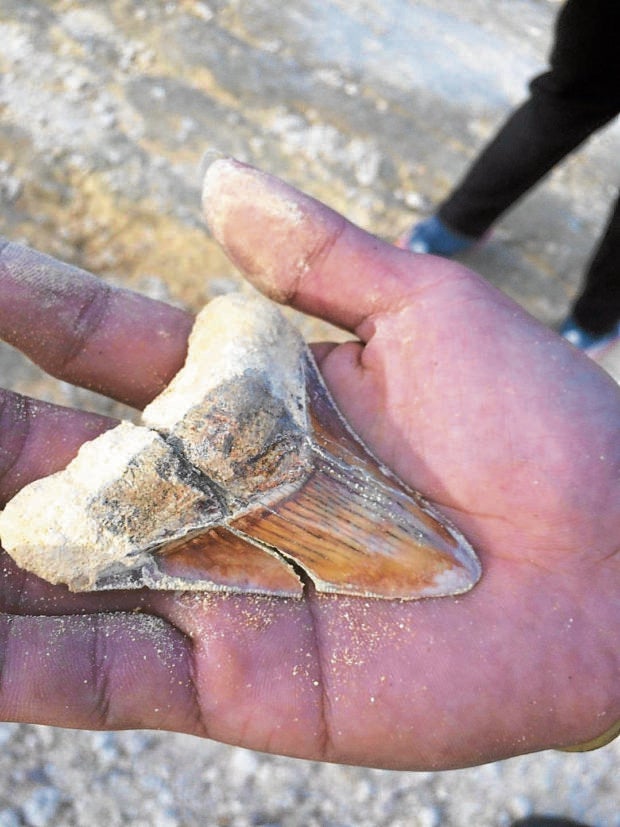 EXTINCT A tooth of the extinct megalodon shark found in Bohol on May 24. —CHRISTIAN GIO BANGALAO/CONTRIBUTOR

TAGBILARAN CITY, Bohol, Philippines —vSometime in May, after the island-province of Bohol went on a more relaxed quarantine, four friends decided to take their minds off the coronavirus pandemic still raging elsewhere in the country by going for a hike up the mountains of Maribojoc town.

Little did they know that their brief rest on the hilly village of Landig on that afternoon of May 24 would lead to a fascinating discovery.

Christian Gio Bangalao tripped over what appeared to be a hard shell protruding on the ground.

“When I looked down, I saw something unusual. I got curious what it was,” said the 25-year-old, who was with friends Jestoni Alagon, Fel Vincent Vargas and Geo Rodell Nacorda.

With a stick, Bangalao slowly dug out the object.

Vargas, 23, said the group had no idea what it was but suspected it was a tooth of an animal. He took photos of the heart-shaped object and posted it on Facebook, hoping that someone could identify it.

Another friend told them to seek the help of researchers from the National Museum of the Philippines-Bohol (NMPB). Soon after, a team led by museum officer Charlemeine Tantingco responded.

The piece turned out to be a tooth of a megalodon, one of the largest sharks to have lived on earth during the Miocene to Pliocene period 5 million to 2.6 million years ago. It measures 7.6 centimeters by 6.5 cm, or the size of a child’s palm.

Alagon, 23, said the discovery provided a better understanding about the sharks that inhabited the waters of Maribojoc, as they remained to be an important part of the town’s unique natural heritage.

Alagon and his three friends donated the tooth to the NMPB last May 28 and hoped to locate more remains of prehistoric organisms in their town.

Once upon a time

In 2018, a Maribojoc resident, Venjo Busalla, also found a fossil tooth of a megalodon at the town’s public plaza. It is currently displayed at the National Museum of Natural History in Manila.

Still, coming across a megalodon fossil is considered a rare find and gives a better understanding of how the island of Bohol was formed—from being part of the seafloor to becoming dry land, said local historian and professor Jose Marianito Luspo.

“[The] process, which took millions of years to complete, has something to do with the fact that once upon a time, the island was part of the ancient seas of the Visayas,” Luspo said.

Luspo said Bohol, one of the prime tourism destinations in the country, must have been developed from the magnetic tectonic mechanism, which resulted from underthrusting of the southwest Philippine plate located east of Samar and Surigao.

In a Facebook post, the NMPB said the megalodons were now extinct but local fishermen still encountered shark pups at the Abatan River in Barangay Lincod, also in Maribojoc.

“This could mean that the area could be a nursery for some sharks. Use of estuaries as nurseries is a known aspect of shark behavior. As apex predators, sharks are important in maintaining the balance of our oceans’ ecosystems,” the agency said.