Independence Day marked by division on the streets of Washington 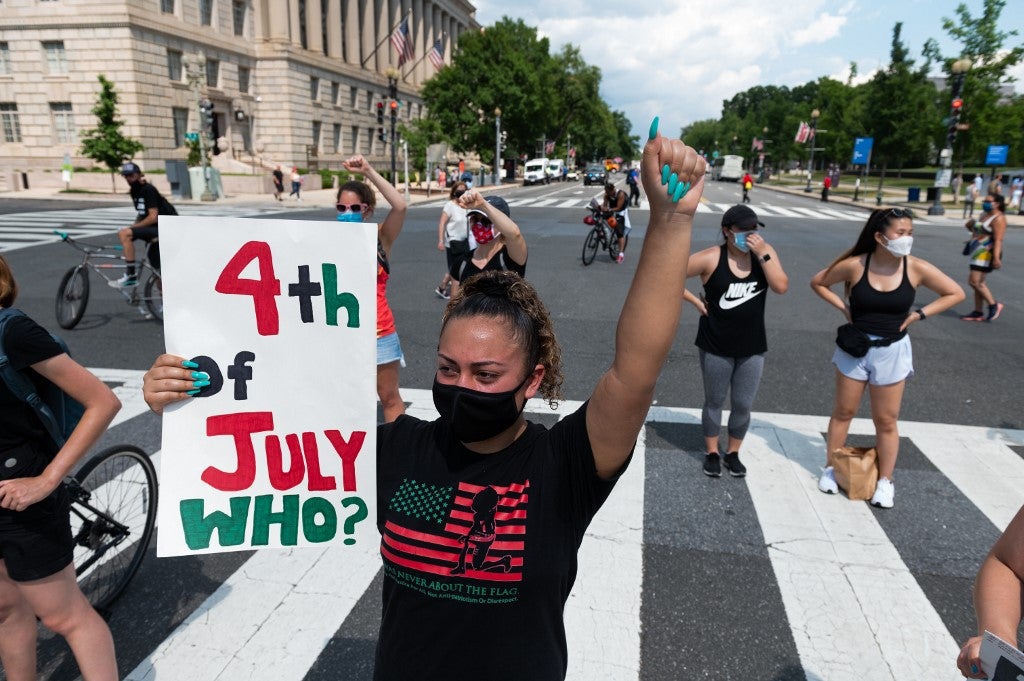 Anti-racist demonstrators march near the Washington Memorial in Washington, DC on July 4, 2020, ahead of the Independence Day celebrations.  (Photo by ROBERTO SCHMIDT / AFP)

As it struggles to contain the coronavirus and reckons with waves of protesters demanding racial justice, the United States is deeply polarized, with the gulf seemingly insurmountable on a day usually marking patriotism and unity.

The one thing people outside the White House — surrounded by an imposing police cordon — and on the nearby National Mall seemed to be able to agree on was that this was not where they wanted America be.

“We should be celebrating our unity, diversity, liberty, we shouldn’t be looking at each other as enemies ready to go to war,” pro-Trump transgender activist Kristy Pandora Greczowski told AFP.

Mary Byrne, 54, who came with her two sons, said she was worried about the “antagonism” that currently reigns.

“We are not talking to each other anymore, we are yelling at each other. We need to look inside to see what’s wrong with us,” she said.

Americans have long been divided between liberal and conservative values.

But the devastating impact of the coronavirus pandemic has caused deep fear and anxiety.

Then, in May, an African American man was killed by a white police officer in Minneapolis, igniting waves of protest.

Since then the United States has begun a historic soul-searching as it reckons with its racist past, modern racial injustices — including those further illuminated by the impact of the virus — and police brutality.

“We will never allow an angry mob to tear down our statues, erase our history, indoctrinate our children or trample on our freedoms,” he told the crowd on the White House lawn later Saturday evening.

Earlier, on the avenue outside the White House, Jennifer Friend said the president was being “disrespected.”

“All lives matter, but protesters pick what they want to protest about. It’s hypocritical,” said the 53-year-old tourist from Florida.

Further along the sun-drenched National Mall, Katima McMillan, 24, from Kentucky, was with a group of activists.

On the lawn, they spread the bands of the three colors of pan-Africanism: red for blood shed in liberation struggles, black for the people of the continent, and green for the natural wealth of Africa.

“We are no less than anybody else, black rights are human rights,” the young African American said.

But then there were those whose determination to enjoy the holiday no matter what offered a glimmer of hope that American institutions might yet withstand the divisions.

Wayne and Lynnis, a couple from Maryland, were among the guests hand-picked to attend Trump’s “Salute to America” speech on the White House lawn.

“I don’t care who’s in office, it’s an honor to go to your White House,” she added with a smile.