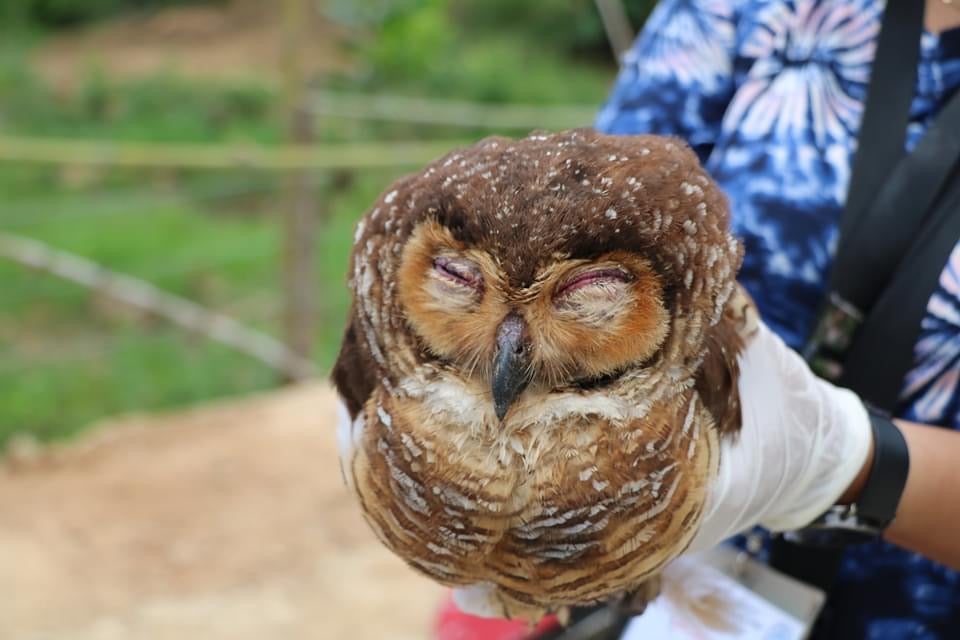 A spotted wood owl was found by residents in Aborlan, Palawan Saturday. Weak and wounded on its right wing, the endangered bird was transported to a facility for treatment. Photo courtesy of PCSD

PUERTO PRINCESA CITY—An environmental management graduate in Palawan province turned over to the local authorities a wounded adult spotted wood owl (Strix seloputo) on Saturday (July 4) after it was found on the ground in Aborlan town.

The Palawan Council for Sustainable Development (PCSD), in a report issued Saturday afternoon, said that a certain Mylene Ledesma, an alumnae of Western Philippine University (WPU) and a resident of Barangay (village) Ramon Magsaysay in Aborlan town, surrendered to the PCSD staff a wounded owl that “seemed weak and was not able to fly nor move away from its position.”

The spotted wood owl was first seen by Ledesma’s mother and older sister as it was lying on the ground with a deep wound on its right wing. The cause of the wound is undetermined.

The PCSDS Wildlife Traffic Monitoring Unit (WTMU) and Enforcement Team said the owl has a length of 44 centimeters from head to tail, a wingspan of 72 centimeters, and weighed more or less 1.2 kilograms.

The endangered bird was transported to a facility for proper medical attention.

The Spotted Wood Owl is listed as an “Endangered Species” under PCSD Resolution No. 15-521 and is protected under Republic Act No. 9147, or the Wildlife Resources Conservation and Protection Act.