Community newspapers in the country are struggling to survive amid the new coronavirus disease (COVID-19) pandemic. With printing slowly becoming financially nonviable, many publishers agree that the future for them is digital.

The paper version was prompted by demands for publishing ordinances, notices and advisories, and subscriptions, according to Billy San Juan, officer in charge of SSP. He said the Laus Group of Companies, the minority partner of Sun.Star Publishing, was “exerting all efforts to maintain SSP’s print edition.”

“Business is really bad because the corporate advertisements have not resumed,” San Juan said, adding that the digital platform could supplement the income of the paper.

In between, it strengthened the digital edition, which it had been doing for three years, said Punto’s editor in chief, Caesar Lacson.

“We halved all our salaries, including correspondents’ pay, across the board. We are still gasping with the loss of advertising revenue, particularly from airlines, hotels [and] malls. I don’t know how long we can last,” Lacson said.

Online news site Pampanga News Now (PNN) has survived on meager resources, keeping its lean staff since it began on trial run during the ECQ. In four months, its stories averaged 20,000 likes, according to editor in chief Ria de Fiesta.

“We have yet to pay our news contributors and columnists. But they continue sending materials. In a sense, they are helping sustain PNN and we promise to pay once the business side picks up,” De Fiesta said.

The Voice, founded in Pampanga in 1955, was not printed during the lockdown because the plates used in the printing were in Metro Manila, said Lincoln Baluyut, its publisher and editor.

But it had been publishing its stories on Facebook and Instagram since last year. It resumed printing during the GCQ despite having a lean staff that was paid even with its limited advertisements.

In Bataan, only the Koop Vision has been printing out of the 10 weekly newspapers in the province. Published by the Bataan Press Club Multipurpose Coop., Koop Vision employs three regular staffers. It has been relying on legal notices, which have been scarce during the lockdown, to survive.

The situation worsened during the Luzon lockdown when printing presses stopped operating because there were no workers, Maganes said. But the management saw the potential of the digital platform that prompted them to shift to online operations.

In Bulacan province, local publishers, who also largely rely on legal notices for income, said they would ask the courts to give them more time to print their old issues due to financial constraints.

Roy Reyes, publisher of Bulacan News Catcher, said the paper had to reduce its number of pages from 12 to four as a cost-cutting measure. 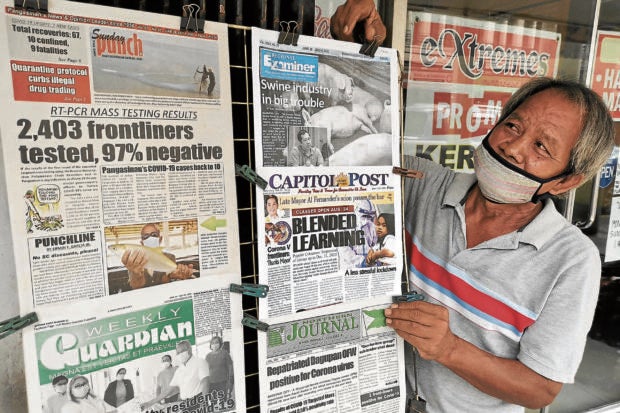 DOWN TO FIVE Danny Mayola, who has been selling newspapers in Dagupan City for 30 years, says only five community papers reach his newsstand from a high of 15 publications before the lockdown in March. —WILLIE LOMIBAO

Community newspapers in Albay also reported terrible losses due to the drop in advertising revenue, notably judicial notices, while overhead expenses for office rental, electricity, communication and salary of editorial staff continued to eat away their funds.

Each of these publications has suffered at least P100,000 in monthly revenue losses due to lack of local ads from government agencies and commercial establishments.

Ricky Gonzales, Weekly Digest publisher and editor, had to use his savings to continue printing, even with limited circulation, and to pay for office rental, electricity, communications and staff salaries.

Nilo Aureus, publisher of Bicol Mail based in Camarines Sur province, said the lockdown prevented the local papers from reaching other cities and towns, cutting their circulation by close to 60 percent.

Marlyn Relingado, publisher and editor of Dyaryo Bikol, said she had to resize the paper and make other adjustments to cut cost.

“We have digital issues during ECQ. When we resumed printing, we had to minimize the use of color,” said Joenald Medina Rayos, publisher and editor of Pahayagang Balikas,

“We have not retrenched people, but we also have no ads,” said Rayos, whose paper is circulated in Calabarzon region.

Aside from the printed copy, the Lucena City-based weekly Sentinel Times runs editions on Facebook, Twitter and other social media platforms, according to Nimfa Estrellado, its publisher.

But Estrellado said she was not stopping the printed edition because not all people had access online.

“Local newspapers are crucial during a crisis as we are able to cover events and topics, some of which may not be of interest to a national newspaper,” she said.

In the Visayas, the pandemic has brought many community newspapers to the edge.

Lemuel Fernandez, publisher of the Iloilo-based The Daily Guardian, said advertisements were down 80 percent. The newspaper, however, has strengthened its digital platform while reducing the number of printed copies to cut costs as most restaurants, hotels and business establishments remain closed, or have limited operations.

Fernandez said the company adopted a rotational work scheme for some employees to cut expenses.

For the past several months, the weekly Capiz Times based in Roxas City has depended on legal notices, said Edalyn Acta, its operation manager. It also publishes COVID-19-related advertisements from local governments.

In Negros Occidental province, a drastic drop in advertising revenue has also been experienced by newspapers due to the shutdown of many businesses and the difficulty of distributing copies.

The Visayan Daily Star, which turned 38 in April, is faced with dwindling advertising barely enough to meet salaries and production cost. In April, it stopped printing and went full digital, but a month later, it resumed publication but with reduced pages.

But it maintained its daily presence online. It resumed publication in late May, coming out twice and later thrice a week in black and white, Toga said.

In Eastern Visayas, the Leyte Samar Daily Express is printed only twice a week due to restrictions brought about by the pandemic. Aileen Grafil, its operations chief, said the drop in advertisements and the difficulty in getting printing supplies were disrupting its operations.

Media workers in Mindanao said they had also been growing anxious as some media companies are closing down while others contemplate going online.

One newspaper based in Davao City has already announced its last issue on July 3. The shutdown shocked most of its workers because the paper was still operating full blast during the lockdown.

The employees received the retrenchment notice on June 1, with management assuring them that they would get all financial benefits accorded to them by law. “It was such [a] short notice and at this difficult time,” said an employee.

“We are buffeted by a tsunami of challenges,” said Antonio Ajero, editor in chief of the award-winning Edge Davao. “Our chances may hinge in our ability to navigate fast enough into another form.”

But he said doing so would mean they would be hiring, not firing workers. “We have to recruit more warm bodies and improve our content amplification, have livestreaming capability,” said Ajero, who also chairs the boards of Edge Davao and Zion Accuprint Publishing Inc.

“We would need more online news-savvy talents always with an eagle eye for stories with potentials of becoming viral. We will have to develop more young content providers whose specialization would be enterprise stories,” he said.

Some radio stations have been keeping a skeleton force in their operation.

Apart from Sun.Star-Cagayan de Oro, which published its last printed edition on June 30, the pandemic has affected the operation of Mindanao Gold Star Daily (MGSD), another newspaper based in northern Mindanao’s regional capital.

At the start of the health crisis in March, MGSD stopped its daily print edition but still kept its online platform. It resumed its print edition on May 1 but came out only twice or thrice weekly, depending on advertising load.

In a note published shortly after the lockdown, Mindanao Times publisher Jesus Dureza said reverting to an online channel and initiating a work-from-home arrangement among newspaper staff would be their contribution to “flatten the curve.”

“This decision has not been easy for the Times management but we decided to err on the side of caution instead of risking ourselves during these uncertain Times,” Dureza wrote on March 21.

“Now that we are moving, hopefully, to MGCQ, we would like to help in creating a positive climate coming out of the anxiety and desperation of the two-month lockdown,” Cabusao said.