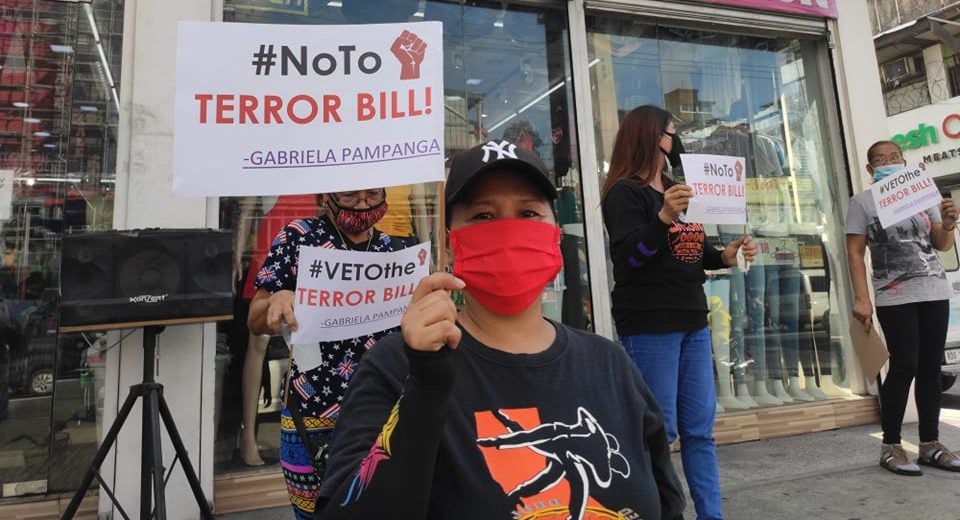 Protesters in Pampanga hold flash mobs against the anti-terror Bill as they commemorate the eight anniversary of the murder of Dutch activist Wilhelm Geertman on Friday. (Photo from Bagong Alyansang Makabayan-Central Luzon)

CITY OF SAN FERNAND –– Around 50 protesters on Friday held flash mobs against the anti-terror bill in Angeles and Mabalacat cities in time for the eighth anniversary of the murder of Dutch activist Wilhelm Geertman on Friday.

During the pickets at the cities’ commercial districts along MacArthur Highway, the protesters displayed placards and streamers rejecting the bill.

“We gathered fewer protesters in respect of social distancing during this [COVID-19] pandemic. But we are expressing our stand against the bill,” Pol Viuya, chair of the Bagong Alyansang Makabayan (Bayan) in Central Luzon, told the Inquirer.

Viuya said Geertman was an “example of an activist killed by the state when there was still no anti-terror bill.”

In 2019, Judge Christine Marie Capule of the Regional Trial Court Branch 48 had convicted Marvin Marzan Nuguid to life imprisonment for the July 3, 2012 extra-judicial killing of Geertman in his office in Angeles City.

But Nuguid was acquitted in a robbery case.

Aurora Santiago, Geertman’s girlfriend, rued that the mastermind was still at-large. Geertman, 67, had worked in development programs in poor communities in the Philippines for over 40 years.

Before his death, he helped the poor folk in Aurora province in their campaign against mining projects, landlessness, illegal fishing, and timber poaching.