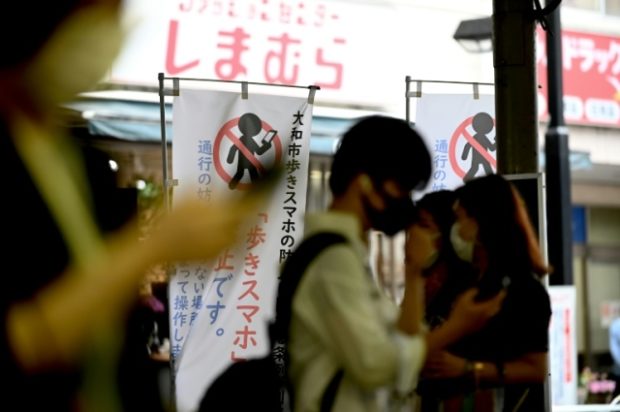 Authorities in Yamato want to highlight the dangers of scrolling while strolling. Image: AFP/Behrouz Mehri

A Tokyo suburb on Wednesday imposed Japan’s first ban on a habit seen around the world: pedestrians glued to their phone screens while walking, sometimes dangerously oblivious to their surroundings.

Visitors arriving at the railway station in Yamato City were greeted with banners announcing the new prohibition, which applies to all foot journeys around the neighborhood’s public roads, squares and parks.

“Using smartphones while walking is banned. Please operate your smartphones after you stop walking,” a recorded female voice cautioned travelers.

There is no punishment for those unable to tear themselves away from their screens in the street but the suburb of 240,000 wants to use the ordinance to highlight the dangers of scrolling while strolling.

The unusual move appeared to have broad support from citizens both young and old, with very few people on the streets of Yamato spotted breaching the new rule.

“I often see people using mobiles while walking. They are not paying attention to things around them. Elderly people may not be able to dodge them,” said 64-year-old Kenzo Mori.

“Using a mobile phone is addictive… People seem to feel they cannot stop looking at their mobile and they have to feel connected with friends all the time,” he told Agence France-Presse.

Teenager Arika Ina said she often saw people looking at their screens while walking and believed the habit was dangerous.

But she said people should be walking around without being in thrall to their phones as a matter of common decency, and questioned the need for legislation.

“I don’t think we need an ordinance to ban it. You can stop it by being a little bit more careful,” the 17-year-old said.

Research by Japanese mobile giant NTT Docomo in 2014 found that pedestrians lost 95% of their field of vision while staring down at a smartphone.

The company ran a computer simulation of what would occur if 1,500 people traversed the road outside Tokyo’s Shibuya station — the busiest pedestrian crossing in the world — while all simultaneously looking at their smartphones.

The results showed that two-thirds would not make it to the other side without incident, with 446 person-to-person collisions and 103 people being knocked over. RGA

Japan city aims to ban phone use while walking