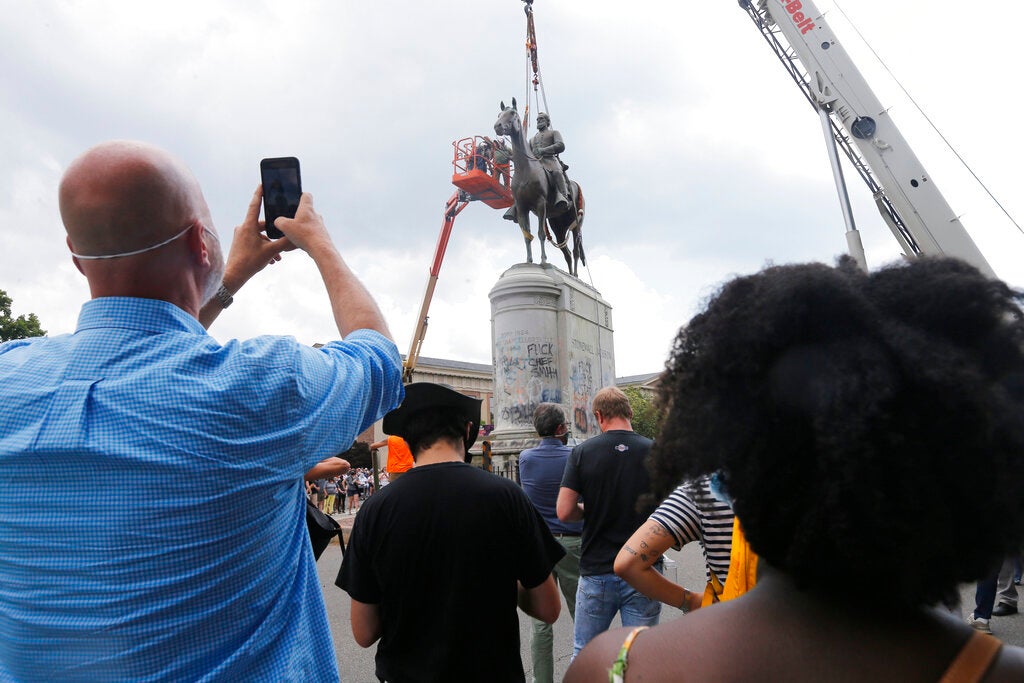 Mayor Levar Stoney’s decree came weeks after Virginia Gov. Ralph Northam ordered the removal of the most prominent and imposing statue along the avenue: that of Confederate Gen. Robert E. Lee, which sits on state land. The removal of the Lee statue has been stalled pending the resolution of several lawsuits.

The Jackson statue is the latest of several dozen Confederate symbols to be removed from public land in the U.S. in the five weeks since the death of George Floyd at the hands of police sparked a nationwide protest movement.

In most instances, state or local governments moved to take down monuments in response to impassioned demonstrators, but in a few cases —including several other Virginia Confederate statues — protesters toppled the figures themselves. Also this week, Mississippi retired the last state flag in the U.S. that included the Confederate battle emblem.

Confederate statues were erected decades after the Civil War, during the Jim Crow era, when states imposed new segregation laws, and during the “Lost Cause” movement, when historians and others tried to depict the South’s rebellion as a fight to defend states’ rights, not slavery. In Richmond, the first major monument — the Lee statue — was erected in 1890.

Work crews spent several hours Wednesday carefully attaching a harness to the massive Stonewall Jackson statue and using power tools to detach it from its base. A crowd of several hundred people who had gathered to watch cheered as a crane lifted the figure of the general atop his horse into the air and set it aside.

“This is long overdue,” said Brent Holmes, who is Black. “One down, many more to go.”

Eli Swann, who has lived in Richmond for 24 years, said he felt “an overwhelming sense of gratitude” to witness the removal of the statue after he and others have spent weeks demonstrating and calling for it and others to be taken down. He said that as a Black man, he found it offensive to have so many statues glorifying Confederate generals for “fighting against us.”

“I’ve been out here since Day 1,” Swann said. “We’ve been seeing the younger people out here, just coming and constantly marching and asking for change. And now finally the change is coming about.”

Flatbed trucks and other equipment were spotted Wednesday at several other monuments as well. The city has roughly a dozen Confederate statues on municipal land, including one of Confederate Gen. J.E.B. Stuart. Mayor Stoney said it will take several days to remove them.

The mayor said he also is moving quickly because he is concerned that people could be hurt trying to take down the gigantic statues themselves. In Portsmouth last month, a man was seriously injured when protesters tried to pull down a Confederate statue.

“Failing to remove the statues now poses a severe, immediate and growing threat to public safety,” he said, noting that hundreds of demonstrators have held protests in the city for 33 consecutive days.

Stoney said the removal of the statues is “long overdue” and sends a message that the city of Richmond — the onetime capital of the Confederacy — is no longer a place with symbols of oppression and white supremacy.

“Those statues stood high for over 100 years for a reason, and it was to intimidate and to show Black and brown people in this city who was in charge,” Stoney said.

“I think the healing can now begin in the city of Richmond,” he said.

Stoney’s move came on the day a new state law took effect granting control of the monuments to the city. The law outlines a removal process that would take at least 60 days to unfold.

But during a City Council meeting Wednesday morning, the mayor balked as the council scheduled a special meeting for Thursday to formally vote on a resolution calling for the immediate removal of the statues.

“Today, I have the ability to do this through my emergency powers,” Stoney said. “I think we need to act today.”

Work crews arrived at the Jackson statue about an hour later.