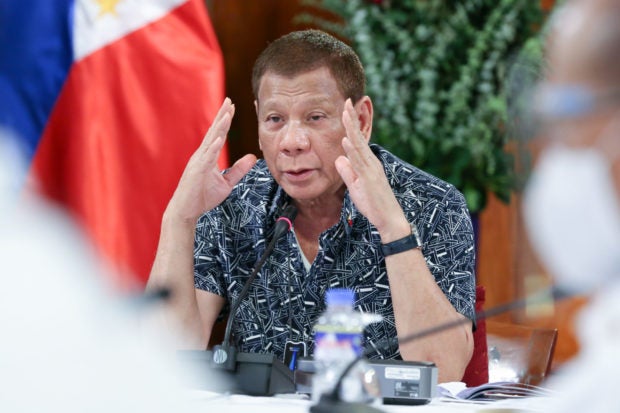 MANILA, Philippines —  Moved by the pitiful sight of hundreds of domestic airline passengers stranded because of erratic flight schedules made more complicated by quarantine restrictions in the provinces, President Rodrigo Duterte ordered Cabinet officials to come to their aid by feeding them and making their long wait somehow more comfortable at airport terminals.

The President directed Interior Secretary Eduardo Año to gather all stranded passengers outside Ninoy Aquino International Airport (Naia), transport them to temporary quarters and provide food for them.

Duterte said he would foot the bill, but said their provisions need not be fancy.

The past weeks had seen hundreds of stranded passengers camping out under flyovers or on roadsides outside Naia Terminal 3 after their domestic flights were canceled because of the COVID-19 pandemic.

Some had gone to the airport on the off chance that they could get on flights to their home provinces. Others opted to sleep on roadsides outside the terminal because they had nowhere else to go or had run out of money.

In his public address late Tuesday, the President also directed Transportation Secretary Arthur Tugade to remove restaurants at airport terminals and convert the space into seating areas for passengers.

He observed that high-end restaurants had large spaces that otherwise could seat passengers waiting for their flights.

“Art, you know that airport, whoever designed it is a jerk. Tell him that. There are no seats. There are only a few seats,” Duterte said, addressing Tugade.

When flights overlap, many people are left standing, he noted. “And what’s really worse is that there is a big restaurant outside. Make the restaurant leave and place seats there because some passengers have children or are pregnant and they can’t sit down,” he said.

He said Tugade should terminate the contracts of the restaurants if possible.

“I will look for it, where it is, whether inside or outside,” Tugade said when asked by reporters which high-end restaurant the President was referring to.

But no restaurant or establishment would be shut down, he said. On the contrary, private concessionaires that are still closed will be asked to open to provide seats for the stranded passengers.

Tugade, who inspected Naia Terminal 3 on Wednesday afternoon, said he has ordered the purchase of more seats for stranded passengers.

The secretary said Terminal 3 had seats for more than 8,000 passengers but the seats were reduced by 50 percent because of the policy on physical distancing.

“The President is correct in his observation, seats are really lacking [at Naia]; his observation demonstrates his great concern for the people, he wants that when you travel you are comfortable,” he said.

He also said that airport officials were considering to use the VIP lounges for stranded people.

Starting Wednesday, all passengers with valid tickets and confirmed flights for the day will be allowed to stay in the airport even if their flights are canceled and will be given free meals, Tugade said.

Meanwhile, conglomerate San Miguel Corp. has come to the rescue of hundreds of repatriated seafarers stranded at Manila North Harbor in Tondo, Manila.

The seafarers have camped out at the port while awaiting clearance to return to their provinces.

Since Monday, volunteers at Better World Tondo (BWT), SMC’s feeding center and food bank, have been preparing and delivering hot meals for breakfast, lunch and dinner of the seafarers.

“We really empathize with them. Just like any Filipino, they would want to get home to their families during this time of crisis. However, there’s also the need to comply with restrictions and policies on travel. As they are caught in a tough situation, we figured the least we could do is ensure they are fed, healthy, and well,” Ang said.

Those given the clearance to go home to their destinations were are also given financial assistance by Ang, “just so they can bring something home to their families.” Ang, who himself hails from Tondo, opened the BWT community center in September 2019, to serve as a learning and feeding center for children in Manila’s poorest communities.

Read Next
Giant balloon offers tours to edge of space
EDITORS' PICK
Alex Eala wins Grand Slam on Independence Day: ‘I hope I made my contribution to the country’
Ahead of ONE: Full Blast II, Mongkolpetch warns Elias Mahmoudi: ‘Watch out for my fists’
Rare earth metals at the heart of China’s rivalry with US, Europe
PNP, PDEA destroy P25.8M worth of marijuana in Kalinga
G7 rivals China with grand infrastructure plan
Kai Sotto continues to inspire Filipinos by sharing his passions and stories with Smart Prepaid
MOST READ
Chel Diokno, Bro. Eddie, Ate Vi decline 1Sambayan 2022 poll nomination
1Sambayan names 6 choices to pit vs Duterte’s anointed in 2022
Groups slam Duterte ‘surrender’ to China
G7 rivals China with grand infrastructure plan
Don't miss out on the latest news and information.