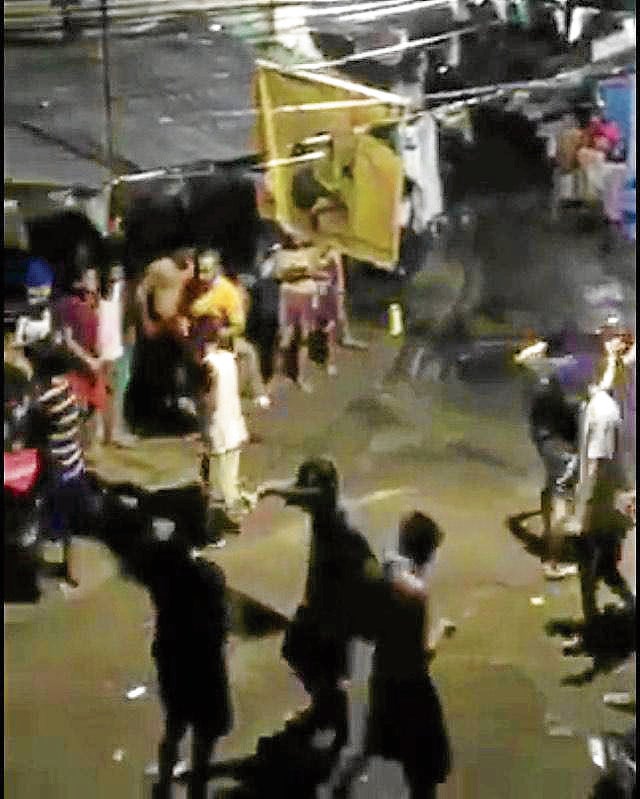 DANCING IN THE STREET Residents of Sitio ISKP (Inahan sa Kanunayng Panabang) in Cebu City dance in the streets as music blares from a sound system set up in their community during a fiesta celebration. Authorities say the residents violated quarantine restrictions meant to contain the spread of COVID-19 cases in the city. —CONTRIBUTED PHOTO

Environment Secretary Roy Cimatu is pushing for an extension of the enhanced community quarantine (ECQ) in Cebu City to contain the spread of the new coronavirus disease (COVID-19), describing health statistics in the city as “very alarming.”

“We have to contain cases first before easing the ECQ. Then once it is eased, we can concentrate it on granular lockdowns,” said Cimatu, who was tapped by President Duterte to oversee the government’s response in containing the spread of COVID-19 in Cebu City.

Lockdowns in 12 barangays with high COVID-19 cases should be maintained even if cases tapered off, he said at a press briefing on Tuesday.

Cimatu said 13 deaths were recorded in Cebu City on Monday alone, noting that 30 of every 100 people tested for COVID-19 would turn out positive for the dreaded virus.

Cebu City recorded 5,915 COVID-19 cases as of June 29, the Department of Health said in its latest advisory. Of these, 3,374 were active cases, while 2,375 had recovered and 166 had died.At a press conference on Tuesday, lawyer Rey Gealon, spokesperson for the city government, said at least 69 city employees contracted COVID-19 in the past weeks.

“Deaths are rising, including those for Cebu City alone. We have to contain this first,” Cimatu said.

He cited violations of restrictions on mass gatherings, such as a recent procession held in Cebu City, as he warned that administrative cases will be filed against local officials who violate quarantine restrictions.

Earlier, the President placed Cebu City under ECQ from the more relaxed general community quarantine after a surge in infections.

Cimatu attributed the spike to overcrowding in the villages, violations of quarantine restrictions and the return of stranded residents who might have been infected with the virus.

Residents of another subvillage here are being investigated by authorities for violating health protocols during a fiesta celebration on June 28.

Videos and photographs posted on social media showed residents of Sitio Inahan sa Kanunayng Panabang, or ISKP (Our Mother of Perpetual Help), in Barangay Calamba dancing in the streets while others took part in drinking sprees outside a chapel.

Police Brig. Gen. Albert Ignatius Ferro, director of the Central Visayas police, said the celebration was a clear violation of the government’s ban against mass gathering, especially in areas under ECQ, the strictest form of quarantine.

“There are really hard-headed individuals out there,” he said.

On June 27, devotees gathered in the streets of Sitio Alumnus in Barangay Basak San Nicolas to join a late afternoon procession and Sinulog street presentation in honor of the Sto. Niño (Holy Child Jesus).

Police filed charges against 10 officials of Basak San Nicolas, including village chief Norman Navarro, and five organizers for violating provisions of Republic Act No. 11332, or the Mandatory Reporting of Notifiable Diseases and Health Events of Public Health Concern Act, and a local ordinance that prohibits mass gathering while the city is under ECQ.

Ferro said investigators were identifying the people involved in the merrymaking in Sitio ISKP. At least seven ISKP residents were taken to the police station on Tuesday for investigation, said Victor Quijano, Calamba village chief.

Cimatu is planning the relocation of isolation centers that are too close to communities. He proposed that the Cebu City coliseum be converted into an isolation area.Presidential spokesperson Harry Roque said residents of Cebu City would be given priority in the distribution of the second tranche of the social amelioration program.

Roque also gave assurance that the lack of doctors, nurses and medical staff was being attended to with the deployment of public health doctors and medical personnel from the military to the city.

Senate President Vicente Sotto III, whose family hails from Cebu, said Cimatu should have a Cebuano working with him to address the COVID-19 problem.“The Cebuanos could sometimes have the mentality that if you are from Manila, they are aloof. I have to be very blunt about it. We Cebuanos are like that,” Sotto said.

If someone from Manila would issue directives, many Cebuanos would raise their eyebrows at the situation, he said. “But if it’s someone who comes from the area, it would be easier to accept whatever would be implemented there. That’s only my opinion,” Sotto said.“Secretary Cimatu has been doing a good job; there’s no problem with that. What I mean is there has to be someone from Cebu who would be his counterpart or assistant,” Sotto added.

—WITH A REPORT FROM LEILA B. SALAVERRIA INQ