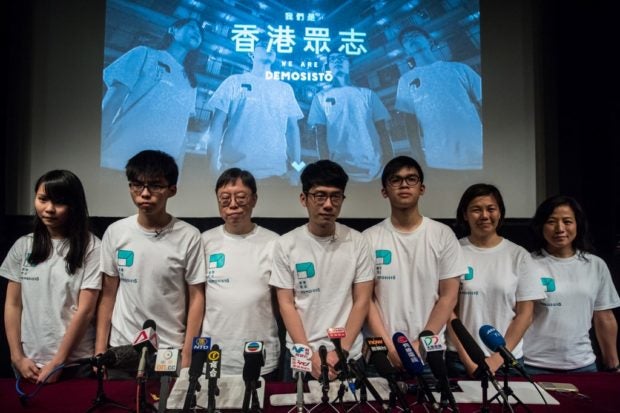 “After much internal deliberation, we have decided to disband and cease all operation as a group given the circumstances,” Demosisto said on Twitter.

The announcement came after four of the party’s prominent figures — Joshua Wong, Nathan Law, Jeffrey Ngo and Agnes Chow — said they were ending their involvement with the group.

Demosisto was part of a new generation of parties that sprung up in the aftermath of student-led pro-democracy protests in 2014 as popular anger towards Beijing’s rule swelled.

They infuriated Beijing by demanding universal suffrage and campaigning for foreign countries to impose sanctions on China.

Campaigners like Wong — who has previously been jailed for his activism — are routinely villainized by China’s state media as “separatists” although Demosisto does not advocate independence.

Wong is also often labelled a “black hand” colluding with foreign forces because he has held meetings with international politicians.

“I will continue to defend my home — Hong Kong — until they mute me and eliminate me from this land,” Wong wrote on Facebook.

Rights groups have expressed fears the new security law — which was passed by China’s top lawmaking body on Tuesday morning — could be used to silence figures and parties that push for the city to have greater autonomy.

Both Wong and Law have planned to run for Hong Kong’s Legislative Council election in September, likely now as independents.

The city’s legislature is weighted to return a pro-Beijing majority.

But pro-democracy parties hope to snap up most of the chamber’s electable seats, capitalizing on growing public anger with Beijing’s rule.

It is unclear whether the city’s election officials will even let them stand for office.

Law became a lawmaker in the city’s partially elected legislature but was later disqualified for protesting during his oath-taking ceremony.

Wong and Chow were previously barred by authorities from standing for election because they had spoken at the time in support of self-determination for Hong Kong.

A small pro-independence group called Hong Kong National Front announced it was disbanding its branch in the city and shifting its work to divisions in Taiwan and United Kingdom instead.

Independence is a historically fringe view in Hong Kong — polls show most protesters tend to want democracy and autonomy, not a full split with China.

The precise wording of the new security law remains a secret but Beijing has said it will outlaw acts of subversion, secession, terrorism and colluding with foreign forces.

Similar national security laws are used on the authoritarian mainland to crush dissent, in particular the more vaguely worded subversion and collusion offences.