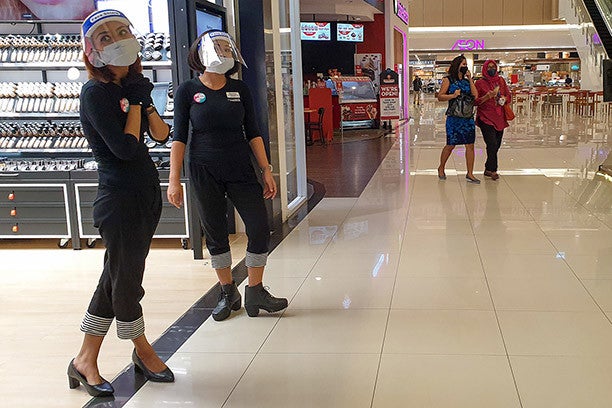 JAKARTA — Indonesia was among the nations with a relaxed approach to managing the COVID-19 pandemic before meeting World Health Organization (WHO) recommendations for rolling back social restrictions, according to recent data from the England’s University of Oxford.

The Oxford COVID-19 Government Response Tracker collected data from more than 160 countries on measures taken by governments to respond to the current pandemic. The report looked at 17 indicators, including school closures, mobility restrictions, income support to residents and testing regime.

While Oxford said its indices cannot reflect Indonesia’s risk management, Indonesian epidemiologists, who predicted the first wave would reach its peak sometime in mid to end of June, are concerned that the premature easing might stretch out the pandemic.

On June 1, days before Jakarta entered a transitional phase to the so-called new normal, Oxford’s lockdown rollback checklist showed the country’s transmission control had scored 0.0 out of 1.0, while its testing and tracing capacity had scored 0.5.

Transmission control is automatically set to 0.0 for any country with more than 50 new cases per day.

Indonesia has recorded a high community transmission rate in the past months, with hundreds of new cases recorded each day. Starting June 9, the country consistently recorded an average of 1,000 new cases each day, totaling 54,010 confirmed COVID-19 cases as of Sunday, the highest in Southeast Asia.

Oxford researcher Toby Phillips said the checklist score for testing and tracing in Indonesia was 0.5 earlier this month, but it had recently gone down to 0.4.

“While Indonesia has relevant policies in place, the actual number of tests being performed is fairly low compared to other countries,” Phillips, who is also head of research and policy in Oxford’s Digital Pathways, told The Jakarta Post on Friday.

A good metric here, he said, was to see that Indonesia took nine tests to identify a new case, compared to the Philippines with 20 tests and Malaysia 470 tests, which suggests they have widespread testing relative to their caseload.

On the other hand, Indonesia scored well in managing imported cases with a score of 1.0, which has remained stable until now. The high score reflects that Indonesia is stopping or quarantining any foreign arrivals, Philipps said.

However, Indonesia’s score for community understanding, which is based on mobility data from Apple and Google to gauge the change in people’s behavior, has decreased to 0.6 from 0.8 recorded earlier this month.

“The fact that the score has reduced means that Indonesians are moving about and interacting with each other more than at the start of the month, even though the level of transmission is still high,” he added.

Along with gradual loosening of policies, Oxford’s stringency index shows that Indonesia’s coronavirus response has also loosened from 80 out of 100 recorded at the end of April to 68 in June.

“The first wave hasn’t finished yet. If preventive actions are not carried out consistently and correctly, we will run the risk of experiencing greater peaks,” epidemiologist Iwan Ariawan from the University of Indonesia told the Post on Friday.

Iwan condemned the low perception toward the risk of COVID-19 in communities, saying that the government had the immense task of arranging a good monitoring mechanism, besides improving public health system capacities.

Epidemiologist Windhu Purnomo from Airlangga University’s School of Public Health said fellow experts predicted the first wave might end in September, but he also warned of a lengthy wave and potential rebounds amid loosening policies.

“Seeing the trends of high infections, I am now less optimistic,” Windhu said.

He said the government should be consistent with its own policies, citing Surabaya, the capital of the worst-hit province of East Java, which had imposed a transitional phase to the new normal despite high transmission rates.

Windhu said areas designated as “green or yellow zones”, especially those with more adequate transportation systems, needed territorial boundaries and isolation from “orange and red zones” to protect them from being reinfected.