‘Who killed the milkfish?’ 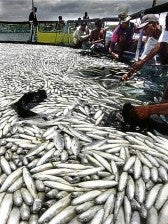 CARETAKERS clear a fish cage in the Kakiputan Channel, a body of water separating Anda and Bolinao towns, of dead bangus. PHOTOS BY RAY B. ZAMBRANO

THEY’RE stubborn. These are the words of Nestor Domenden, regional director of the Bureau of Fisheries and Aquatic Resources (BFAR), when asked why fishkills have been a recurring nightmare in Bolinao and Anda towns in western Pangasinan in the last 10 years.

“They (milkfish growers) know where their fishing structures should be built, but they continued to disregard it,” Domenden says.

“So, for the nth time, the operators incurred heavy losses because of their stubbornness,” he says.

Domenden was referring to the 39 bangus growers who own 107 pens and cages decimated by a fishkill on May 29 in the towns. At least 563.26 metric tons (MT) of milkfish worth P44.17 million went belly up because of the fishkill, which, he says, could have been prevented.

“But that’s the problem,” says Dr. Westley Rosario, chief of the National Integrated Fisheries Technology Development Center, BFAR’s research arm based in Dagupan City. “Until now, you see them [fishing structures] right at the openings of the Kakiputan Channel.”

A report from the office of the provincial agriculturist in Lingayen shows that 72 of the 75 fishkill-hit cages were built in the waters off Catubig Point in Barangay Tara up to Barangay Culang in Bolinao, while the rest, mostly bamboo pens, dotted the fishing area from Barangay Mal-ong to Barangay Awag and across the Kakiputan Channel to the island village of Siapar in Anda.

Catubig Point, which is where the Anda bridge links the island town to Pangasinan mainland, is one of the three mouths of the Kakiputan Channel. Another mouth is between the island village of Siapar and the villages of Awag and Mal-ong. The third opening to the channel is between Siapar and Barangay Luciente 2 in Bolinao, where the University of the Philippines’ Marine Science Institute (UPMSI) is located.

Rosario says the fishery area fronting the UPMSI was lucky that it was not hit by the fishkill last week, unlike in 2002, when a massive fishkill did not spare the area.

Fishery officials, disappointed and helpless, can only watch as the bangus stock die. Under the law, local government units have the exclusive authority to regulate all aquaculture activities within their municipal waters, although BFAR “may coordinate with and assist the LGU … and other government agencies concerned in the development, conservation, protection, utilization and management of fisheries and aquatic resources.”

But Domenden says he understands the predicament of local officials because if they insist in implementing sustainability plans to operators, “they will not appear good.”

Rosario says bangus growers may not have been following their recommendations for economic reasons.

“Maybe, they chose the place [where their fishing structures are] because it’s easier to transport the feeds there. It is nearer their warehouses. It is even easier to secure the structures when they are near each other,” he says.

But what Domenden could not understand is the continued proliferation of illegal structures in the two towns. He says his office has released some P1.9 million to western Pangasinan towns, including Bolinao and Anda, for the dismantling of illegal fishing structures.

“So, why did the fishkill take place when their sustainability plans were supposed to be well-funded?” he asks.

Anda Mayor Aldrin Cerdan says most of the fishing structures around his town have permits, noting that the town collected P3.7 million in taxes and fees last year. But he says for this year, many operators have not secured permits.

Rosario says the massive fishkill at the Kakiputan Channel took place not because of the heavy rain that was supposed to have abruptly changed the condition of the water.

Citing the results of a three-year study conducted by his office and a group of Norwegian scientists after the massive fishkill in Bolinao in 2002, Rosario says fishkill incidents in the Kakiputan Channel have always coincided with the neap tide, the lowest level of low tide of the month where the water does not flush out to the sea to refresh.

Rosario says water movement mechanically injects oxygen into the water. “So, during neap tide, [dissolved] oxygen level in the water drops because the water does not move,” he says.

But what had worsened the situation, Rosario says, are the pens and cages crowding the mouths of the channel, impeding the flow of water. Aside from this, he says, millions of bangus in the pens and cages compete for the already low level of dissolved oxygen, and it has simply become inadequate for them.

He says the study also found that water quality in the Kakiputan Channel has deteriorated through the years because at the bottom of the channel are deposits of unconsumed feed and other organic matter.

“This is because the fish cage operations have been in the area for a long time,” he says.

Cerdan says he has ordered a moratorium on any aquaculture activity in the fishkill-hit area in his town this year after this has been cleared of dead fish.

But Domenden says this is not enough. . He is batting for a total ban of pens and cages in the area to allow the marine environment to fallow. “The channel needs to breathe and recharge,” he says.

“Had it not been for the governor’s initiative, fishkill may have also hit other bangus producing towns and cities of the province,” says Dalisay Moya, provincial agriculturist.

Rosario says banning pens and cages in the Bolinao-Anda area would adversely affect Pangasinan’s bangus production. At least 60 percent of bangus supply in Metro Manila comes from Pangasinan, mostly harvested from the area.

He says there are systems that may be adopted by bangus growers to stop fishkills.

But as Bolinao and Anda begin to pick up the pieces from the devastation of their major industry, Pangasinenses are asking: “Who killed the milkfish?”

They are wondering that despite the Local Government Code, fishery laws and marine pollution laws that provide penalties and prison terms for violators, no one has been punished. Worse, no one has been charged yet.

Domenden can only hope for the best: “I hope they [bangus growers] will follow our recommendations. I really hope so.”