Companies prodded to rely less on China, but few respond

BEIJING  — The United States, Japan and France are prodding their companies to rely less on China to make the world’s smartphones, drugs and other products. But even after the coronavirus derailed trade, few want to leave skilled China’s skilled workforce and efficient suppliers of raw materials to move to other countries. 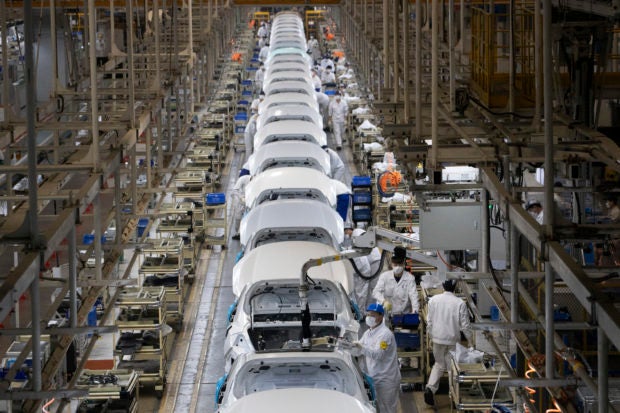 In this April 8, 2020, photo, employees work on a car assembly line at the Dongfeng Honda Automobile Co., Ltd factory in Wuhan in central China’s Hubei province. The United States, Japan and France are prodding their companies to rely less on China to make the world’s smartphones, drugs and other products. But even after the coronavirus derailed global trade, few are willing to give up access to its skilled workers, vast market and efficient suppliers by moving factories closer to home. (AP Photo/Ng Han Guan)

Disruptions from the pandemic, on top of the U.S.-Chinese tariff war, fueled warnings that relying too much on China leaves global companies vulnerable to costly breakdowns in the event of disasters or political conflict.

Drug makers stand out as one industry that is trying to reduce reliance on Chinese suppliers by setting up sources of raw materials in the United States and Europe. But consumer electronics, medical devices and other industries are sticking with China.

“I don’t know of a single company right now that is moving ahead with any plans to move,” said Harley Seyedin, president of the American Chamber of Commerce in South China.

China’s explosive rise as the world’s low-cost factory helped to hold down consumer prices and boosted Western corporate profits. But it has fueled political tension over lost American and European blue collar jobs. Governments and industry consultants fret that dependence on China can be a threat to supply chains and possibly national security.

Chinese factories assemble most of the world’s smartphones and consumer electronics and a growing share of medical equipment, industrial robots and other high-tech goods. This country is a dominant supplier of vitamin C and ingredients for antibiotics and other medicines.

The ruling Communist Party has spent two decades building ports, railways, telecom networks and other facilities that are regarded as among the world’s best.

Philip Richardson, who manufactures loudspeakers in Panyu, near Hong Kong, said he has looked at Vietnam and other countries. But he said while their wages might be as low as 60% of China’s, the savings will be eaten up by the cost of giving up his network of Chinese suppliers.

“We gave it consideration for about a minute, and it doesn’t make sense,” said Richardson, who has worked in China for 22 years. “When you buy magnets, now you have to pay for transportation and customs duties into other countries, whereas in China we just buy the magnets and they are shipping to us.”

President Donald Trump took office in 2017 promising to “bring back our jobs.” The next year’s tariff hikes on goods from China in a fight over technology and trade prompted some exporters to shift production. But changes were small. Most went to other developing countries.

The pandemic has raised political pressure for companies to move.

The Japanese government, which sees China as a strategic rival, is offering 220 billion yen ($2 billion) to companies that move production to Japan in a virus aid package announced in April. It offers 23.5 billion yen ($220 million) for Japanese companies in China to move to other countries.

The tariff war prompted concern about China’s dominance as a supplier of active pharmaceutical ingredients, or APIs, used in antibiotics and vitamins. Some American commentators warned Beijing might retaliate by withholding APIs, though was there no sign that happened.

“There will be an increase in the repatriation of national drug supply chains and the re-establishment of national strategic manufacturing capabilities for key drugs,” Sakshi Sikka, who follows the industry for Fitch Solutions, said in an email.

In May, the U.S. government awarded a contract worth up to $812 million over 10 years to Phlow Corp., a Virginia company set up to insure against drug shortages by producing ingredients and generics.

In Europe, French drugmaker Sanofi SA is setting up an API supplier to reduce reliance on China. Sanofi says the company will be the No. 2 global producer, with annual sales of 1 billion euros by 2022.

India and Indonesia have announced plans to increase their own production of pharmaceutical raw materials.

Those changes are politically driven and will push up costs, while China’s dominance as a global supplier is unlikely to change in the near future, according to Fitch’s Sikka.

Companies including Nike Inc. that used to make shoes, furniture, clothes and other low-margin goods in China have been migrating for a decade to Southeast Asia, Africa and other economies in search of cheaper labor.

For higher-end shoes, however, U.S. import duties would have to rise even further before sites such as Ethiopia or Southeast Asia can compete with experienced Chinese workers and flexible suppliers, said Robert Gwynne, who produces women’s shoes for brands including Steve Madden in Dongguan, near Hong Kong.

“All my clients say, we have to diversify,” said Gwynne. But when shown costs in other countries, “90% take the China scenario.”

Companies also increasingly are tied to China by the appeal of its 1.3 billion consumers at a time when the West’s spending growth is anemic.

Makers of automobiles and higher-value goods are spending billions of dollars to expand Chinese production. As the economy reopened, Volkswagen AG said in May it would spend 2 billion euros ($2.2 billion) to buy control of its Chinese electric vehicle venture and a controlling stake in a battery producer.

Instead of using China to export, “now a lot of people are producing ‘local for local,'” said Lim.

Only 11% of companies that responded to a survey by the European Union Chamber of Commerce in China said they were “considering shifting investment to other countries,” down from 15% last year.

Some are leaving to cut labor costs, but the rest “are really committed to China,” said a chamber vice president, Charlotte Roule.

Moving factories or finding non-Chinese suppliers to reduce the risk of disruption “means further investment,” Roule said. “Who is going to pay for that?”

Charles M. Hubbs, founder of Premier Guard, which makes surgical gowns, masks and other medical devices in China, said he is gearing up to produce face masks in Mississippi to avoid problems with shipping. But he said such an approach won’t work once the pandemic ends and prices fall back to normal.

Many companies already have pursued a “China plus one” strategy in Asia over the past decade. They set up factories in Southeast Asia to serve other markets or insure against disruption in China, even if that raised their costs.

But as China lifted anti-disease controls on business in March, other Asian economies shut down, forcing companies to shift work back to Chinese factories, which are working overtime to make up the shortfall, said Seyedin.

Some U.S. and other leaders are talking about possible tax breaks or other incentives to lure companies home. Trump has threatened to raise taxes on American companies that move from China to any other country but the United States.

Even if tax breaks or subsidies go ahead, companies face the costs of setting up a factory in unfamiliar territory, training rookie employees, finding suppliers and possible disruption to customer relations, said Alvarez & Marsal’s Lim.

“Shifting is not free,” he said.