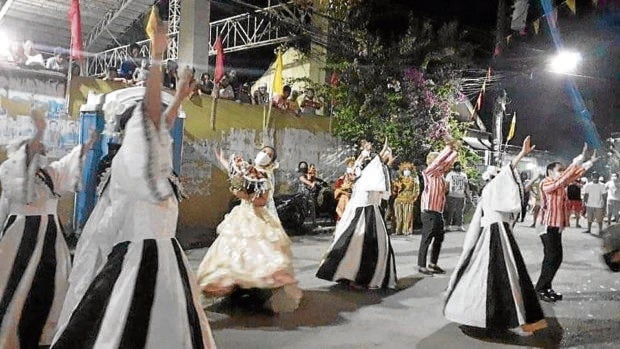 STREET PERFORMANCE Residents of Sitio Alumnos in Cebu City’s Barangay Basak San Nicolas go out of their houses to watch “Sinulog” dancers perform despite the enforcement of a strict quarantine due to the rising number of COVID-19 infections in the city. —CONTRIBUTED PHOTO

CEBU CITY, Cebu, Philippines — Interior Secretary Eduardo Año has directed police officials to investigate and file charges against organizers of a street dance and religious procession in a sitio (subvillage) here, where a surge in new coronavirus disease (COVID-19) infections has been recorded.

Año also ordered officials of Barangay Basak San Nicolas to explain why they should not be charged administratively for allowing the gathering while the city was under enhanced community quarantine (ECQ) and with the village identified as among 12 COVID-19 hot spots here.

On June 27, a “Sinulog” was held during the fiesta of Sitio Alumnos in Basak San Nicolas, which was participated in by hundreds of people despite the ECQ prohibition against mass gatherings.

Sinulog is a colorful dance ritual that commemorates the Cebuanos’ pagan past and their acceptance of Christianity. Participants in costumes dance to the rhythm of drums, trumpets and gongs in honor of the Sto. Niño.

Police Brig. Gen. Albert Ignatius Ferro, director of the Central Visayas police, said nine barangay officials and five organizers violated provisions of Republic Act No. 11332, or the Mandatory Reporting of Notifiable Diseases and Health Events of Public Health Concern Act, and a local ordinance that prohibits mass gathering while the city is under the strictest form of quarantine.

The criminal charges will be filed at the Cebu City prosecutor’s office by the police’s Criminal Investigation and Detection Group on Tuesday.

A separate administrative case will be filed by the Department of the Interior and Local Government against Basak San Nicolas chair Norman Navarro and eight village councilors for “negligence” in the Office of the Ombudsman in the Visayas.

Sought for comment, Navarro said he was disappointed with the unexpected turn of events.

“Why am I impleaded in the cases? Yes, I agreed with the organizers’ request to bring out the image of the Sto. Niño on the streets on board a multicab. Our agreement was just that. I did not allow people to join the procession and Sinulog,” he told the Inquirer in a telephone interview.

“I will face the charges against me. I will defend myself because my conscience is clear,” he said, adding that he did everything to stop the spread of the virus in Basak San Nicolas, which was among the 12 villages in the city that were placed on strict lockdown due to rising cases of COVID-19.

“We will not tolerate any violation of our quarantine protocols. Those responsible will be [held] to account … We will definitely get to the bottom of this. We have issued a show cause order against the officials who are involved in this blatant violation of the ECQ currently being implemented in Cebu City,” Año said in a statement on Monday.
He said the violation of health protocols placed the lives of many people at risk. “We need people to practice discipline. They should know better because Cebu City has the most cases [of COVID-19]. They should be more careful,” he added.

“We have nothing against the expression of devotion but in a time of crisis, we need to think,” Año said.

On June 15, President Duterte put Cebu City under ECQ again due to the rising number of COVID-19 cases, as well as the city’s problem to provide critical health-care assistance to patients.

The President called out Cebuanos for not heeding health protocols aimed at preventing the spread.

Año attributed the surge in COVID-19 infections in the city to complacency and eagerness to resume economic activities mixed with the arrival of stranded residents and overseas workers.