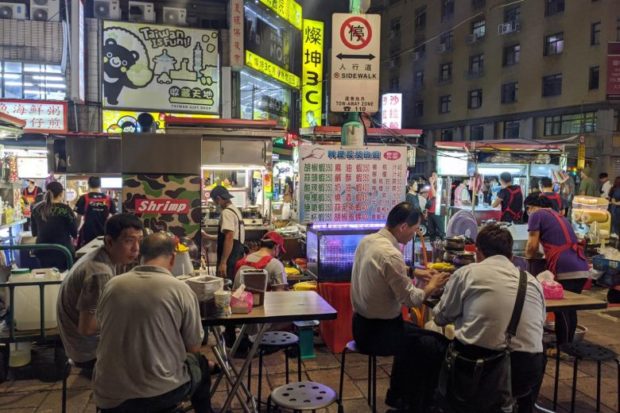 TAIPEI — “Revenge outing” is the latest thing in Taiwan, where the Covid-19 outbreak has been kept well in check, with under 450 confirmed cases and just seven deaths since the first case was reported in January.

After months of staying at home, people have turned to domestic travel and outdoor sports – whether surfing in Kenting, or trekking in Alishan – with a vengeance. Many have also resumed visits to Taipei’s vibrant night markets, popular for local specialities and street food, shopping and their heady atmosphere.

“Things are looking so much better now. Look, I have people lining up for a table! My regulars started coming back in May,” said Mrs Huang Su-mei, 54, who runs a pepper shrimp stand with her family in Ningxia Night Market in Taipei.

On a Wednesday night when The Straits Times visited the market, customers exclaimed to each other their surprise about having to line up on a weekday night, some saying that the coronavirus scare has really started to die down.

Ningxia Night Market is popular with locals and tourists alike. It was also the first night market in Taipei to accept Alipay and other third-party payment options, catering to many Chinese tourists visiting the night market.

“We did see a drop in February and March, especially after (the government) closed the borders… but locals would still come from time to time, so we didn’t get hit that badly,” said Ms Chang Zhi-huei, 33, a volunteer standing guard at one of the night market’s two entrances, armed with a spray bottle of alcohol sanitizer. She sprays the hands of each night market goer before allowing them inside.

Since April 10, Taiwan’s Central Epidemic Command Center has required vendors and customers at night markets, tourist spots and wet markets to wear a mask. Vendors have to remain 1m to 1.5m apart, a rule that visitors are encouraged to follow as well.

The rules also apply to eateries and bubble tea shops, which remain open in Taiwan.

However, people are no longer as cautious as they had been in previous months, said Mr Lin Shih-lung, 25, who works at Truedan, one of Taiwan’s main bubble tea franchises.

He gestured at a group of people clustered outside the shop waiting for their orders. No one was standing more than a meter apart, and a few were not wearing masks.

“We are, of course, wearing masks during business hours and have asked the customers to keep apart from one another,” he said.

From behind her mask, handbag seller Ho Kai-cheng complained about plummeting sales.

She gauges business by “kaishi” – when she makes her first sale of the day – which vendors believe will bring good business for the day.

“Kaishi used to happen around 5pm for me, but I often haven’t sold anything by 9pm,” said Ms Ho, 40. The veteran vendor has sold handbags and purses for over 20 years at Tonghua Night Market.

While business has picked up slightly since May, it is nowhere near pre-pandemic levels. Even the Sars epidemic in 2003 did not affect business this badly, she lamented.

“I think sales have dropped 70 percent between January and May. Things are slightly better now because the weather is hotter and locals feel safer venturing out after the number of cases stopped going up so fast,” he said.

Aside from its proximity to Taipei 101, one of Taipei’s main tourist attractions and malls, Tonghua Night Market is known its stretch of massage parlors on the perimeter.

A couple stop by Mr Ho’s store to buy ice cream. The husband-and-wife pair work at the nearby Dancing Finger Massage, one of the more well-known massage chains in Taipei.

“We’ve lost about 40 per cent of our regular customers who come here for foot or shoulder massages, but they’re slowly trickling back after seeing no new cases,” said the woman, who gave her name as Mrs Chen.

She said Tonghua Night Market, which has a mostly local customer base, was not as badly hit as the touristy night markets. “You still saw people here during the outbreak, even though business got pretty bad in March and April. But for other night markets that rely heavily on Chinese tourists and other foreign tourists, things are worse,” she said.

Mr Ho added: “Locals are coming back to Tonghua now, I can tell they’re not scared because hardly any of them are wearing masks. Plus the weather is hot, so they’re buying my ice cream!”

But over at Shilin Night Market, business has been abysmal, says a tofu pudding seller who gave her name as Ms Nguyen.

The market is one of Taipei’s biggest and as a favorite among tourists, who have been barred from visiting Taiwan since March 23. The busloads of Chinese tourists and other foreign tourists in the past decade are sorely missed.

“I don’t see business getting any better at all,” said Ms Nguyen, 34, shaking her head. “I counted fewer than 50 people coming down the street tonight.”

On a normal night, the market would be so packed that it was impossible to put a number to the visitors, she said.