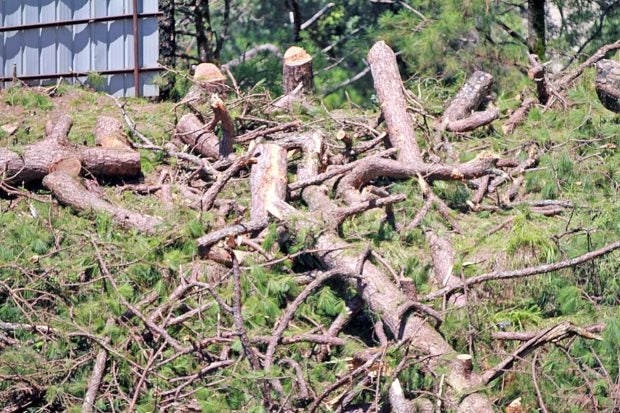 BAGUIO CITY, Benguet, Philippines — Bishop Victor Bendico of the Diocese of Baguio on Saturday assailed the cutting of 53 pine trees and one Norfolk fir by a real estate developer, which also caused an uproar among officials and city residents.

The property developer on June 20 began clearing the trees on the heavily forested hills of Barangay Outlook Drive for a 12-story residential condominium.

Bendico said the diocese “strongly opposes and considers as unacceptable the continuing mass killing of full grown and healthy trees.”

He said in a statement that the developer’s move “gravely rejects the moral principle of the social doctrine of the Church on safeguarding the environment.”

“Mankind has immense power to destroy the environment, which we are doing very well at the moment, and we have the power to save it—if we choose to,” Bendico said.

According to him, the tree cutting “affronts and defies” [the diocese’s vision and mission] on the sustenance of the environment.”Bendico expressed support for those who already criticized the killing of the trees, including Mayor Benjamin Magalong, who had been calling for a moratorium on tree cutting and high-rise building construction in the city.

Magalong initiated Baguio’s redevelopment last year when he assumed office to stop overdevelopment and overcrowding here. He has asked Malacañang to enforce a moratorium on building constructions and tree cutting.

Proceeding with the tree cutting during the quarantine affects Baguio’s regreening plans, which have been delayed by the coronavirus pandemic, Magalong said.

He required the developer to replace the cut trees with 10,800 pine tree seedlings. But the developer said it had secured permits from the Department of Environment and Natural Resources (DENR) for the tree cutting, which, it said, was “undertaken in full compliance with all relevant rules and regulations.”

The developer had secured permits to cut the trees in 2018 after it was granted an environmental compliance certificate for the construction of the condominium in 2017.

“In support of the national greening program, we turned over 5,400 seedlings of Benguet pine to the local units of the DENR,” it said in a statement.

It said company officials met with Magalong last week and agreed to give an additional 5,400 seedlings.