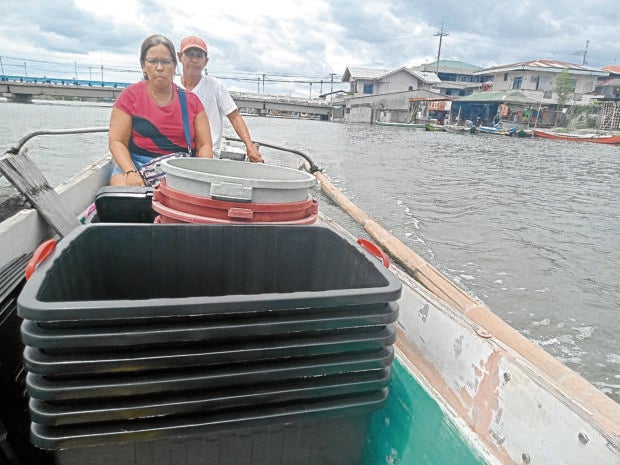 EXODUS Spouses Liza ang Gerry Valiente sail away from their home in the island sitio of Bunutan in Bulakan town, Bulacan province, to give way to the construction of an airport. —CARMELA REYES-ESTROPE

BULAKAN, Bulacan, Philippines — About 3,000 fishermen have agreed to leave their homes in a coastal area of this town where the P735-billion Bulacan international airport project of the conglomerate San Miguel Corp. (SMC) is rising.

With an area of 2,400 hectares, the new airport is designed to have an annual carrying capacity of 100 million, or three times that of Naia.

Paying for the move

SMC has offered to finance the relocation of the fishing families, who chose to move in with relatives in Hagonoy and Bulakan towns, and the City of Malolos. Many of them had served as caretakers of fishponds near their neighborhood.

On Friday, Rosario Pascual-Cristobal, 70, inspected an apartment in Barangay Bagumbayan in Bulakan, where she and her family would temporarily move in.

“San Miguel has been helping us check out new houses, saying they will help us pay for the move,” Cristobal said. She and 60 of her neighbors in the island sitio of Bunutan were the last to leave the Bulakan coastal villages.

A total of 348 residents in the subvillages of Kamansi, Capol, Wawang Dapdap, Wawang Capiz, Kinse, Balwarte, Habulan, Pinagkahipunan and Tapatan have transferred to their new houses this month in other coastal villages in Bulakan and Hagonoy, and Malolos, and in Pampanga and nearby provinces.

The families took with them the roofs and wooden walls of their old houses, intending to use these materials in their new homes.

Cristobal, a widow, lived in all Bunutan all her life, so leaving the island was a difficult choice. “Although we are sad, the time would come when we would need to move on, and this was that moment,” she said.

Juan Torres, 50, a fisherman, and his family are moving to Barangay Atlag in Malolos. “It has been difficult because the move was tinged with so much sadness, but I’m glad as well for receiving aid from San Miguel so we will not starve,” he said in Filipino.

Liza Valiente, 46, said her mother in Barangay Maysantol was taking her in, her husband Gerry and their two daughters.

SMC is providing her a sewing machine for a new tailoring job, while her husband is shifting from fishing to construction work.

“We don’t want it said that we were driven away from our homes. We decided to move. We were not paid to move. We received financial help so we can build new lives,” Valiente said.