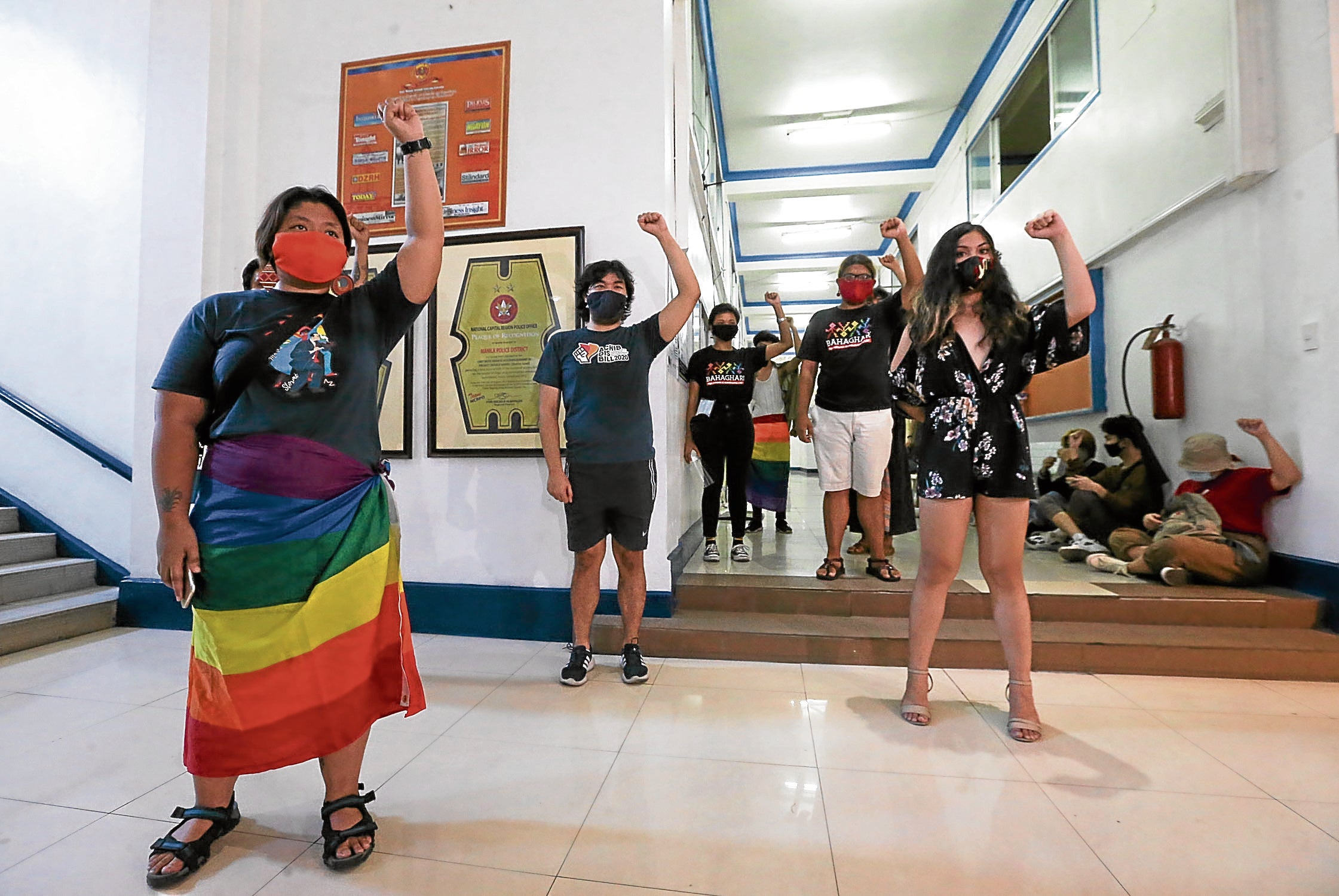 DEFIANT IN DETENTION Pride March participants stand their ground at the Manila Police District headquarters following their arrest after Friday’s protest at Mendiola Freedom Park. Of the 20 who were arrested, three have been released for being minors. (Photo by LYN RILLON / Philippine Daily Inquirer)

MANILA, Philippines — The 20 people arrested on Friday at the 2020 Pride March and protest would be filing countercharges this week against the Manila Police District (MPD).

“There is a clear pattern of impunity here … Human rights do not stop just because there is a pandemic. If we do not fight for our rights now, the situation will only worsen afterward,” Minnie Lopez, legal counsel for “Pride 20,” told the Inquirer on Sunday.

Among those arrested were three minors who were released on Friday night after negotiations with police. Those who remained in detention underwent inquest proceedings on Saturday but were told they would have to wait until Tuesday for the resolution to be issued on their case.

Lopez, however, was hopeful of their release today on humanitarian grounds as those arrested were wary of contracting the new coronavirus disease (COVID-19) inside the packed detention center at the MPD headquarters.

Among those who attended the Pride March at Mendiola Freedom Park were members of LGBTQ+ organizations Bahaghari and Metro Manila Pride. They were also protesting the anti-terrorism bill and jeepney phaseout while urging the government to conduct free mass testing for COVID-19 and provide nondiscriminatory financial aid for those affected by the pandemic.

The MPD said the Pride 20 would be charged with resistance and disobedience to authority, illegal assembly and violation of Republic Act No. 11332, or the Law on Reporting of Communicable Diseases.

The Pride 20, however, insisted that they strictly practiced social distancing and wore face masks during their protest.

Lopez said some of the protesters also experienced discrimination while in detention after policemen reportedly refused to allow Rey Valmores-Salinas, a transgender woman, to join the female detainees in their quarters.

Salinas narrated that some lawmen asked why she had to be detained with women when it was clear that she was a man.

“There was a time when I was asked to go inside a room to verify documents and I saw a police officer looking intently at me. It made me uncomfortable. There were also cases of misgendering in which they would insist on calling me ‘sir,’” Salinas told the Inquirer.

“But the support that we have been getting from our countrymen is what drives us to keep fighting,” she said.

Lopez said they were documenting these incidents of discrimination and harassment as references for the countercharges they would be filing.