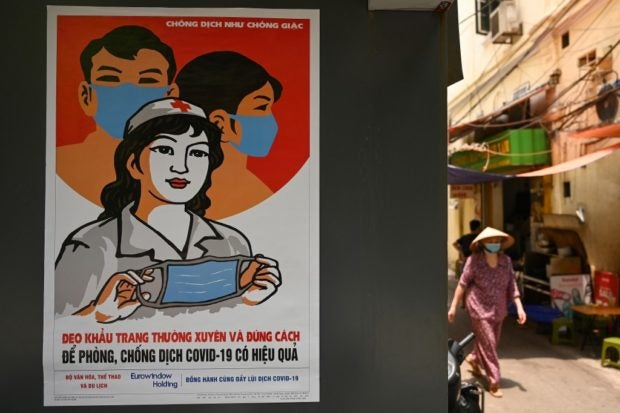 A propaganda poster on preventing the spread of the COVID-19 novel coronavirus is seen on a wall as a woman walks by along a street in Hanoi on April 29,2020. Image: Manan Vatsyayana/AFP

A pilot from Scotland has survived a months-long fight against COVID-19, thousands of miles away from anyone he knew, while in Ho Chi Minh, Vietnam.

Sixty-eight days in a coma has left 42-year-old Stephen Cameron weak. He lost 20 kilograms, suffers from fatigue and depressive episodes, and needs physiotherapy to regain his muscle strength, BBC reported yesterday, June 27. But he is alive, a fact that is not lost on him.

“If I’d been almost anywhere else on the planet, I’d be dead. They would have flicked the switch after 30 days,” he told the news outlet in an exclusive interview.

Cameron is known as Patient 91 and is the most severe case Vietnamese doctors has had to deal with. The country has been hailed successful in handling the coronavirus crisis with just over 300 cases and no deaths.

“The very small number of critical care patients meant anyone who was severely ill got the attention of all the country’s top-level clinicians,” said Dr. Kidong Park, the World Health Organization representative to Vietnam.

It initially appeared that Cameron could threaten the zero record of coronavirus deaths in the country. He was among the cases linked to an outbreak in Buddha Bar and Grill in the city last March, which became known as the Buddha bar cluster.

“Patient 91’s condition got worse very quickly,” said Prof. Luong Ngoc Khue said in the report. The professor is among those who advised in treating Cameron. He is also part of the Vietnamese health ministry’s COVID-19 task force.

“There was a worrying decrease in the function of not just his lungs, but his kidneys, liver and blood flow,” he added.

To treat Cameron, regular conference calls on his condition were held among intensive care specialists in the country.

Following health complications, which included kidney failure, Cameron agreed to be put in a medically-induced coma and on a ventilator. He also had to be put on an Ecmo machine for life support — the machine performs the functions of the heart and lungs. Friends expected that he would not make it.

“My friend Craig was told by the Foreign Office I had a 10% chance of survival, so he planned for the worst,” Cameron recalled. “He gave up my apartment and started doing things somebody would do if I was coming home in a box.”

As he undergoes rehabilitation sessions twice a day, he struggles with the language barrier, with few English-speaking health care workers in the country.

There is also the matter of settling his hospital bills — an Ecmo machine can cost up to $10,000 a day, to which he was attached to for over eight weeks.

With his recovery, he has since been deemed fit to fly back to the United Kingdom on July 12.

“I’m very humbled by how I’ve been taken into the hearts of the Vietnamese people,” he was quoted as saying. “And most of all I’m grateful for the bloody-mindedness of the doctors in not wanting me to die on their watch.” Niña V. Guno/JB

Sheriff who refused to enforce COVID-19 restrictions gets infected