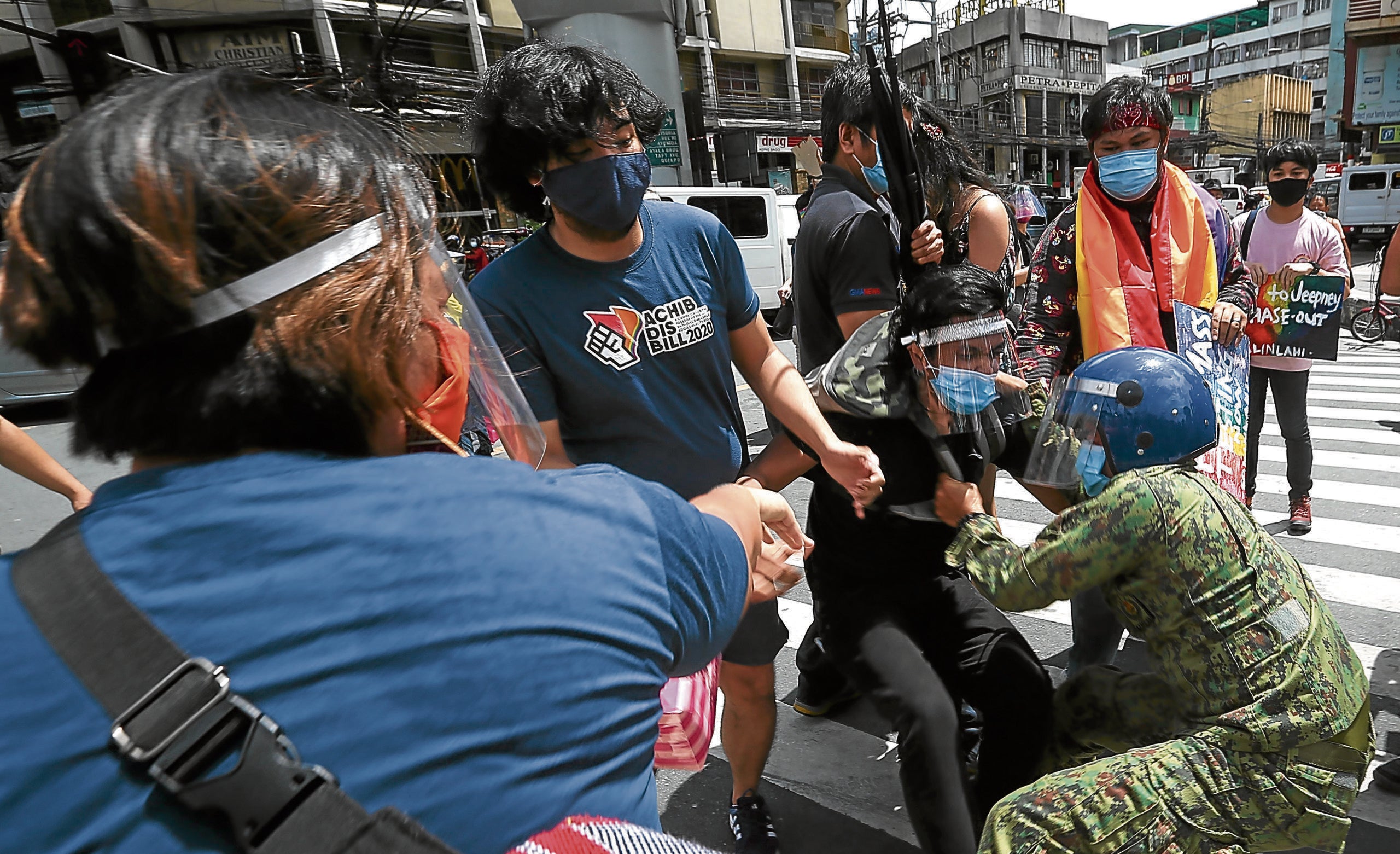 A policeman (R) arrests a protester during a gay pride march near Malacanang palace in Manila on June 26, 2020. (Photo by – / AFP)

MANILA, Philippines — The arrest of some 20 activists during a rally in celebration of LGBT (lesbian, gay, bisexual, transgender) Pride Month has no legal nor factual basis, the National Union of People’s Lawyers (NUPL) said Saturday.

“Do the charges against the rights activists have legal and factual basis? ABSOLUTELY NONE,” the NUPL said in a statement.

Some 20 activists from different LGBT ally groups such as Bahaghari, Gabriela, Sanglahi staged a rally at the Mendiola Freedom Park in Manila on Friday.

Police later arrested the activists for supposedly violating the Public Assembly Law or Batas Pambansa 880, as well as violating Article 151 of the Revised Penal Code on “Resistance and Disobedience to a Person in Authority or the Agents of such Person”, which is in relation to  Republic Act 11332 or the Mandatory Reporting of Notifiable Diseases Law.

But the NUPL raised that “nowhere in the Public Assembly Law is the freedom of speech, expression and peaceful assembly prohibited or curtailed.”

“Holding a protest action is not a crime as this is a basic human right guaranteed and protected by the Constitution and international law,” the lawyers’ group said.

“Contrary to the baseless assertions of police operatives, BP 880 in fact recognizes rallies and only requires permits if the protest action is held in a public place under Section 4 of the law,” the NUPL added. “What is actually prohibited under BP 880 is police intervention during rallies, which is clearly provided for under Section 9.”

With this, the group said that police cannot violently disperse a rally, even if those who participated did not secure a permit, as the protest was held peacefully and social distancing and other health protocols were observed.

The group raised another point, saying that Article 151 of the Revised Penal Code on Resistance and Disobedience to a Person in Authority or the Agents of Such Person “contemplates of a situation where a valid order is given first by the person in authority but the accused resisted or seriously disobeyed it.”

“Again, the footages of yesterday’s arrest would show the participants peacefully conducting their program and one of them was even respectfully negotiating with the police operatives, when suddenly a police officer violently snatched him by the nape and the other operatives swarmed over him,” the NUPL said.

The group then questioned: “How can one resist or seriously disobey an order of a police officer (assuming one has been validly issued), when he is already physically restrained by a group of policemen armed with truncheons and battle gear?”

Another question that the NUPL raised regarding the arrests was how authorities related the alleged violation to Article 151 with RA 11332.

“What does RA 11332 provide? Section 9 of the law requires any person or entity to report ‘notifiable disease’ to proper authorities. Anyone who refuses to do so will be punished accordingly.”

“Under the present circumstances, a person identified to be affected by COVID-19, or as a person under investigation (PUI) or a person under monitoring (PUM), or anyone who knows one to be as such, must inform the proper authorities of such a case,” the group explained.

“In other words, the law requires a prior identification as a COVID 19 patient, PUI or PUM for the provisions to apply. Such is not the case here with the arrest of these 20 rights activists. Clearly, persons who have not been identified as having the dreaded virus cannot be arrested or charged under this law,” the NUPL pointed out.

The lawyers group then said that it was “trying hard to outdo” the police, adding that the “ludicrous” charges are “obviously and totally devoid of factual and legal basis”  and should be dismissed.

“Time and again, we have reminded authorities that neither the pandemic nor their grave ignorance of the law or dumb overzealousness is an excuse to trample upon basic rights and curtail freedoms,” the NUPL said.