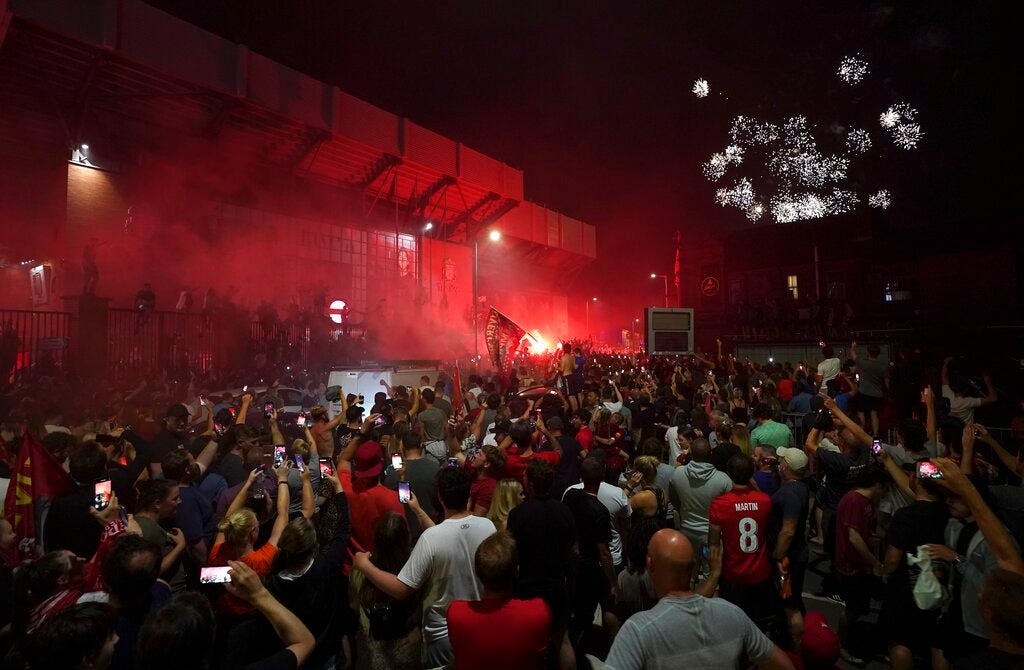 LONDON — In many ways, it has been a perfect storm for illegal gatherings in England as days of hot weather and Liverpool Football Club’s first league title in 30 years have prompted people to abandon their cooped-up coronavirus existence.

British Health Secretary Matt Hancock warned that authorities have the power to close beaches and other public spaces in England amid mounting concerns over the public’s adherence to social-distancing rules.

Following widespread rule-breaking at crammed beaches, illegal street parties in London that turned violent and a mass celebration in Liverpool on Thursday night, there were worries Friday that many residents have ditched their risk-averse attitude as the government eases its lockdown restrictions.

That’s particularly true in Bournemouth, a coastal town in southern England that witnessed huge crowds of sun-seekers on its beaches in the past couple of days. With many people not working during the pandemic, most children out of school, holidays abroad curtailed and restaurants and bars closed until July 4, popular popular locations such as Bournemouth are feeling the pressure as the mercury rises.

“It was just mayhem. People just want to have a good time, but they just don’t give a monkey’s about others,” Pat Munday, 73, said.

Late Thursday, the hottest day of the year so far in the U.K., three men from London in their 20s were stabbed following a fight near the amusements on the town’s pier. Their injuries were described as not life-threatening. Police are investigating.

With the hot weather persisting Friday, there was potential for more mass gatherings. The local council in Bournemouth said extra police patrols were brought in following the “irresponsible” behavior of crowds, but the beaches appeared less packed during the day than they did on Wednesday and Thursday.

Under lockdown restrictions in England, groups are limited to six people, and the public is advised to avoid public transport whenever possible.

“If you look at what’s happening elsewhere in the world, where people have been coming out of lockdown, I’m afraid what you’re also seeing is people taking too many liberties with the guidance, mingling too much, not observing social distancing,” Johnson said while visiting an east London restaurant ahead of the scheduled reopening of pubs and restaurants in England on July 4.

Bournemouth resident Munday described visitors double-parking their cars and blocking driveways, preventing emergency vehicles from getting through, and even of people using the gardens of her apartment block as a toilet.

“When they urinate in your garden, it’s the pits,” she said.

The images from around Bournemouth prompted the health secretary to issue his warning. While saying he was “reluctant” to take such action given the stress people have endured during the lockdown, Hancock told U.K. radio station Talk Radio that “we will take action” if there is a spike in the number of coronavirus cases.

“Naturally people will want to enjoy the sun but we need to do so in a way that is safe for all,” Professor Chris Whitty said in a tweet.

The scenes of revelry were evident overnight on the streets of London and Liverpool, two of the worst-affected cities during the pandemic, which has claimed 43,230 lives across the U.K., by far the highest in Europe.

Kensington and Chelsea Police said a gathering in Notting Hill in west London was dispersed by around 2 a.m. Friday. And though there were no confirmed reports of serious injury, it said objects had been thrown at police officers.

“Such behavior and any violent acts will not be tolerated,” it said.

In the wake of the clashes in Brixton on Wednesday night, the Met said it was undertaking an “enhanced policing operation” across London, which involved additional officers in place.

In Liverpool, the scenes were far more jubilant as the Reds ended a three-decade wait to be champions of England again. Fireworks lit up the sky and thousands of delighted fans packed the streets after Manchester City’s defeat to Chelsea meant no team could catch Liverpool in the Premier League.

“You want to be amongst it,” said 23-year-old supporter Libby Stevens.

The gatherings took place just days after Prime Minister Boris Johnson gave notice that a number of lockdown restrictions would be eased from July 4, including allowing pubs and restaurants to open their doors.

Johnson also effectively announced that the two-meter (6.5-foot) social-distancing rule would be reduced to a meter (around three feet) from that date, a move that is largely aimed at bolstering businesses.