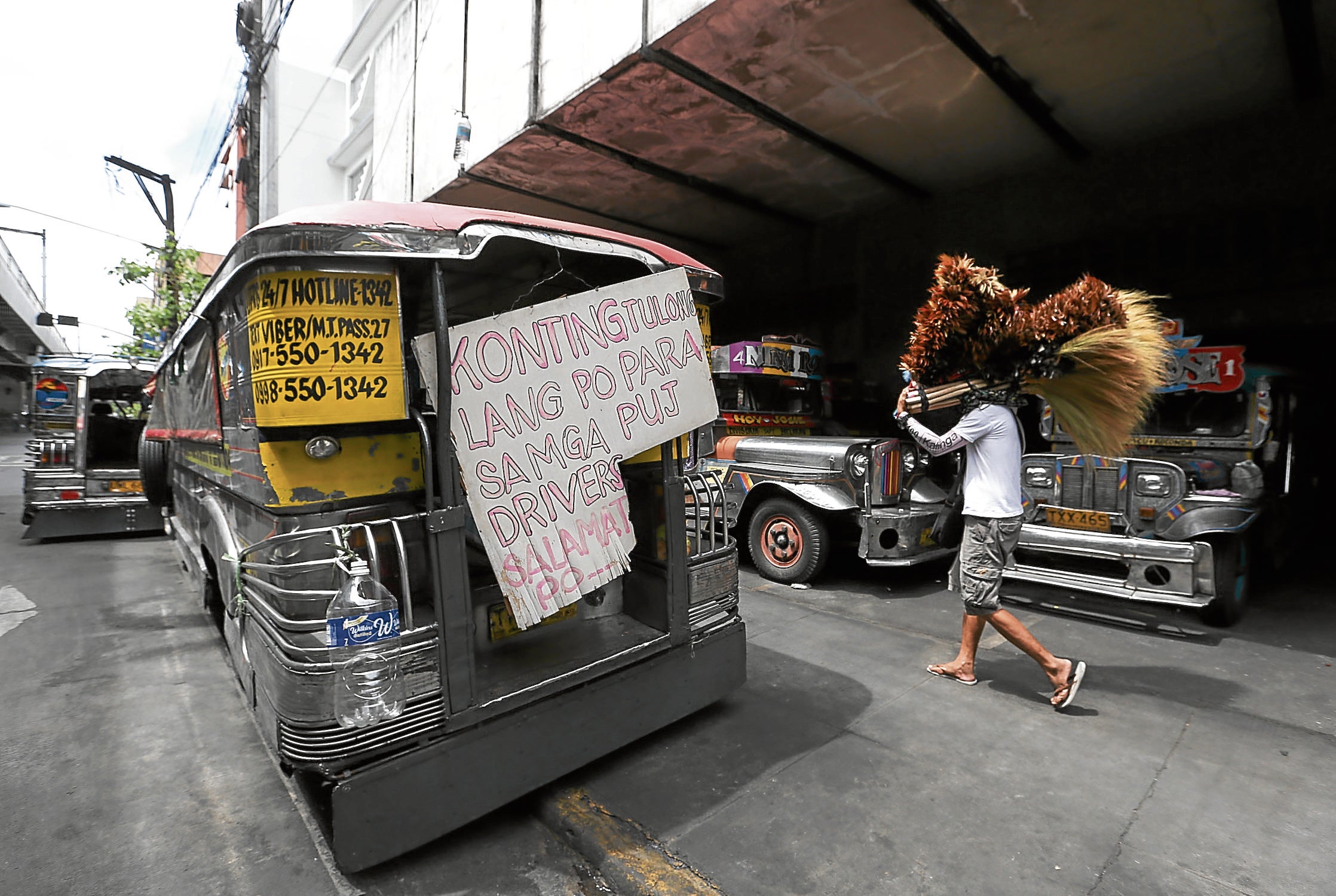 OUT OF JOBS, OUT OF CASH Idle jeepneys are seen parked outside a building along Rizal Avenue in Manila. Many jeepney drivers have resorted to begging on the streets to survive. —LYN RILLON

It would be “inhuman” for the government to pursue the jeepney modernization program without considering the sorry plight of thousands of drivers and operators of conventional jeepneys, which had been out of the streets for over three months, Sen. Grace Poe said on Friday.

The government had banned public utility vehicles, such as the traditional jeepneys, after President Duterte imposed strict quarantine measures on March 15 to curb the spread of COVID-19 in Metro Manila and the entire Luzon island.

Amid the mounting public clamor, the Land Transportation Franchising and Regulatory Board on Wednesday said it would allow the return of “roadworthy” jeepneys and UV Express vehicles starting next week.

Poe, Senate public services committee chair, said while she was supportive of the efforts to modernize the country’s traditional jeepneys, policymakers should listen to the “legitimate concerns” of jeepney drivers, many of whom opted to beg on the streets after losing their only source of income.

“It’s inhuman to force the modernization [program] since many jeepney drivers are getting hungry as they had been jobless,” Poe said in a statement.

Poe had filed Senate Bill No. 867 to ensure a “just and humane public utility vehicle modernization program” by providing affordable loans to jeepney drivers and cash subsidies to those who would not be able to comply with the new policies.

But Clean Air Philippines Movement Inc. president Leo Olarte said while the government must “rightfully empathize” with the jeepney drivers who are bearing the brunt of the blanket transport ban, it must not yield “to arbitrary statements or political pressure nor subjective public opinion or propaganda.”

Olarte’s statement came after the Alliance of Concerned Transport Organizations chair Efren de Luna warned that they would burn their jeepneys “as their last card” if the department continues to give them the runaround as to when they would be allowed to return to the road.

Olarte said the government should instead provide food rations to the sector in the meantime.

But as Pinagkaisang Samahan ng mga Tsuper at Opereytor Nationwide chair emeritus George San Mateo said, rations would not help resolve their problem when they didn’t even get the state subsidies they were promised during the quarantine period.

San Mateo also slammed Olarte’s claims that allowing public utility vehicles that are not roadworthy to operate again would “worsen our coronavirus problems because the deadly air pollution that they will again emit [in the air that we all breathe] will surely weaken everybody’s immune system without an exemption.”

“The jeepneys that we want to return to the road are the same duly franchised and duly registered jeepneys, which means they had passed the smoke emission and motor vehicle inspections by the Land Transportation Office,” San Mateo said.