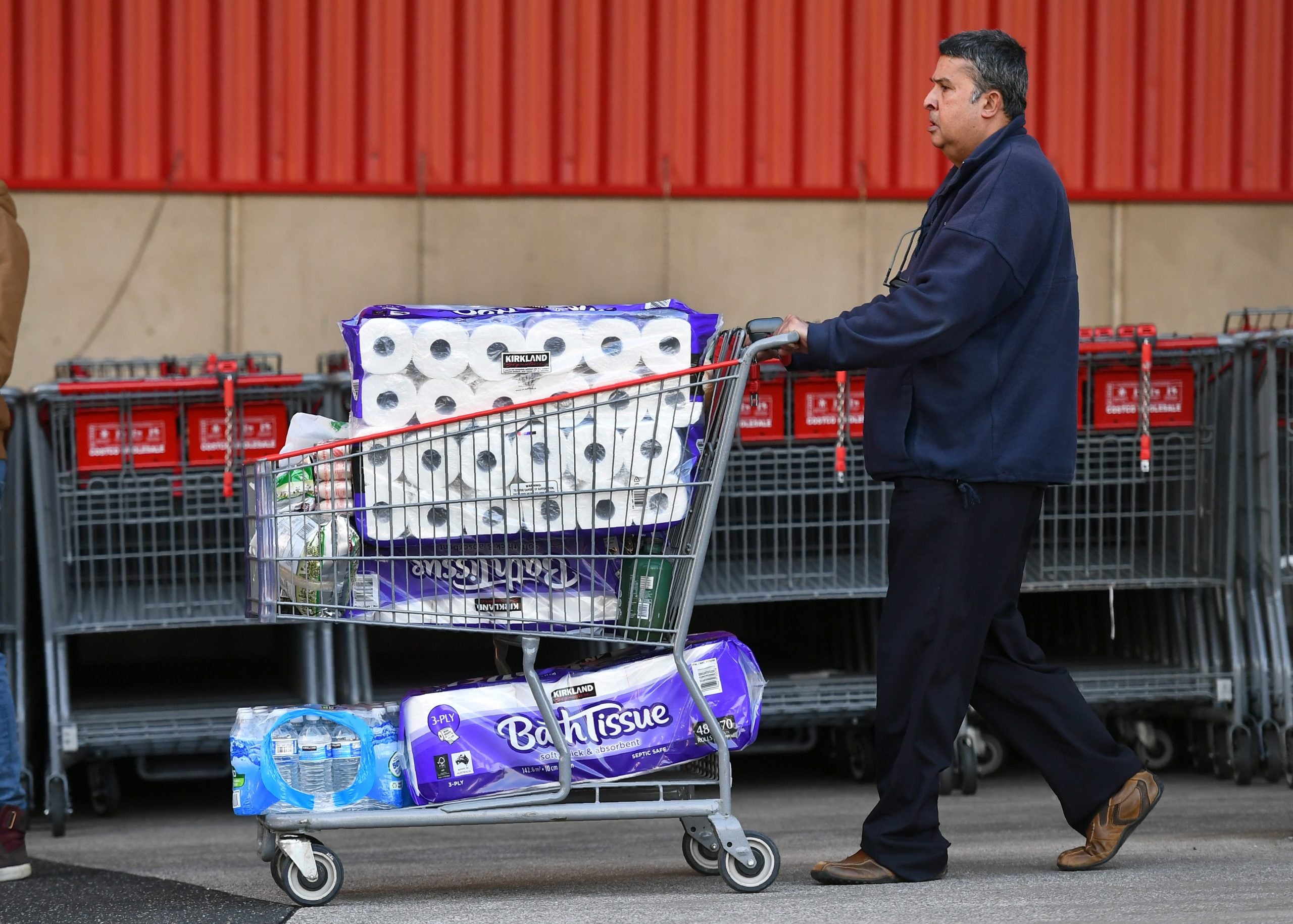 People leave a Costco outlet with a trolley full of toilet paper and cleaning products as fears of a second wave of COVID-19 have sparked a rush on some supermarket items in Melbourne on June 24, 2020. – Major supermarkets in the state of Victoria have reimposed buying limits on toilet paper and other essentials after a renewed escalation in demand sparked fears of a return to scenes of panic-buying seen early in the pandemic. (Photo by William WEST / AFP)

“Stop it, it’s ridiculous,” Prime Minister Scott Morrison told his compatriots after the rush on stores, insisting the COVID-19 outbreak in Melbourne did not threaten the country’s so far successful containment of the epidemic.

Officials reported 30 new coronavirus infections in Melbourne overnight — the 10th straight day of double-digit rises in new cases in the city and surrounding Victoria state, while most other Australian regions have seen no or low single-digit new infections for weeks.

Victorian health workers have launched a major virus testing blitz across 10 Melbourne suburbs accounting for the majority of new cases, while the army was due to deploy around 200 troops this weekend to help with the operation.

While the number of new cases is relatively low compared to soaring tallies elsewhere in the world, the Melbourne outbreak has sparked fears of a second wave of the epidemic as most parts of the country push ahead with relaxing restrictions on business, public gatherings, and travel.

Woolworths and Coles, Australia’s two biggest supermarket chains, both said Friday they were reimposing nationwide quotas on purchases of toilet paper and paper towels to counter a surge in panic buying not seen since the first days of the pandemic in March.

The outlets brought in the buying restrictions on stores in Victoria earlier this week but extended them after noting excessive demand spreading to other states.

“While the demand is not at the same level as Victoria, we’re taking preventative action now to get ahead of any excessive buying this weekend and help maintain social distancing in our stores,” Woolworths Supermarkets said in a statement.

Morrison’s chief health adviser played down the likelihood that the Melbourne outbreak would evolve into a broader second wave of infections.

“We’re very likely to see more such outbreaks, not just in Victoria — it could be anywhere in the country,” said the doctor, Brendan Murphy.

But shoppers were not the only ones jittery over the Melbourne outbreak, as officials elsewhere in Australia warned Victorians against traveling to their areas.

In neighboring New South Wales, officials said they would bar Victorians from attending professional sporting events when they begin allowing fans next week — a particularly stinging move in the sports-mad country.

Australia has recorded roughly 7,500 coronavirus cases and 104 deaths in a population of 25 million, with several regions believed to be effectively virus-free.