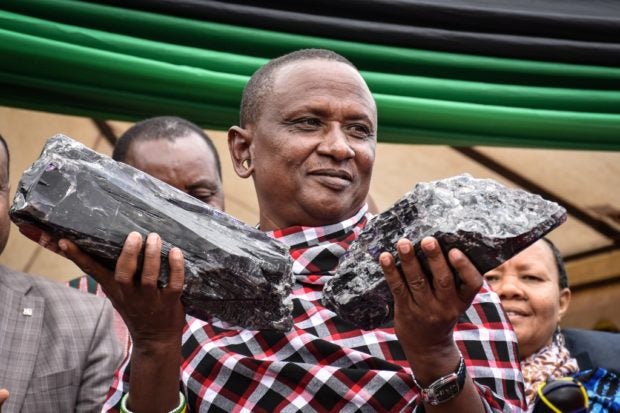 Tanzanian small-scale miner Saniniu Kuryan Laizer, 52, poses with two of the biggest of the country’s precious gemstones, Tanzanite, as a millionaire during the ceremony for his historical discovery in Manyara, northern Tanzania, on June 24, 2020. – Laizer found the stones weighing 9.27 and 5.1 kilograms respectively in the northern Mirerani hills, an area that President John Magufuli had fenced off in 2018 to stop the smuggling of the gem. He sold them to the government for 7.7 billion Tanzanian shillings (nearly $3.3 million/2.9 million euros). The broken biggest record of Tanzanite was 3.5 kilograms. (Photo by Filbert RWEYEMAMU / AFP)

Dar es Salaam, Tanzania — A Tanzanian small-scale miner has become a multi-millionaire after uncovering two of the biggest of the country’s precious tanzanite stones ever found and selling them to the government.

Saniniu Kuryan Laizer, 52, found the stones weighing 9.27 and 5.1 kilograms (20.4 and 11.2 pounds) respectively in the northern Mirerani hills, an area that President John Magufuli had fenced off in 2018 to stop the smuggling of the gem.

He sold them to the government for 7.7 billion Tanzanian shillings (nearly $3.3 million/2.9 million euros)

Tanzanite was first found in the foothills of Kilimanjaro in 1967, and the northern Tanzanian region of Manyara is the only known place where the stones, coveted by jewelers by their remarkable violet-blue sparkle, are found.

At a function celebrating the find in Manyara on Wednesday, mining minister Dotto Biteko said the stones were the biggest ever uncovered in the country.

“Laizer is our (shilling) billionaire and let us make sure that he is safe,” he said.

“We are now moving from a situation where the small miners were smuggling tanzanite, and now they are following the procedures and paying government taxes and royalties.”

Laizer said he hoped to use the money to develop his community.

“I plan to build a mall in Arusha and a school near my home,” he said.

“I thank God for this achievement because it’s the first time to get this size. When I found these, I notified government officials who valuated the stones, and today they called me for payment.”

Jewellers Le Vian, which during the 1980s and 1990s acquired half the entire production of Tanzanite, said the amount paid to Laizer was only a fraction of its retail value.

“While the $3 million paid to the miner has undoubtedly changed his life forever, it is only a twentieth of the potential retail value of the gemstones he discovered,” said chief executive Eddie LeVian in a statement.

“The miner Saniniu Laizer defied all odds to unearth these world record-busting gemstones. The artisanal miner dug out these stones by hand and they remained intact. Mining can be a very rough process with enormous amounts of breakages along the way.”

However, it appears the stones will not be destined for the market, as the government wrote on Twitter they would be placed in the national museum.

Magufuli made a call to Laizer during the ceremony that was broadcast on loudspeakers, to congratulate him.

“This is the benefit to small miners and testifies to the fact that Tanzania is rich,” he said.

When the 24km (14-mile) perimeter wall was unveiled around the mining site, Magufuli said that 40 percent of all tanzanite produced at the site was being lost to smugglers.

Magufuli has taken multiple steps to regulate the mining sector, which has faced allegations of fraud and underreporting of production and profits.