Trump zeroes in on base to overcome reelection obstacles

WASHINGTON  — President Donald Trump is sharpening his focus on his most ardent base of supporters as concern grows inside his campaign that his standing in the battleground states that will decide the 2020 election is slipping. 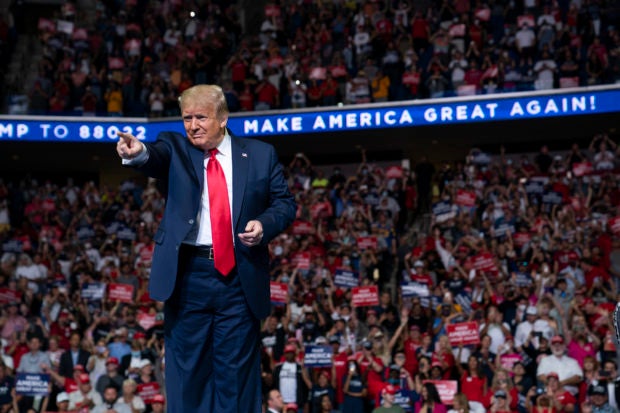 In this June 20, 2020, photo, President Donald Trump arrives on stage to speak at a campaign rally at the BOK Center in Tulsa, Okla. President Donald Trump is sharpening his focus on his ardent base of supporters as polls show a diminished standing for the president in battleground states that will decide the 2020 election (AP Photo/Evan Vucci)

Trump turned his attention this week to “left wing mobs” toppling Confederate monuments and visited the nation’s southern border to spotlight progress on his 2016 campaign promise to build a U.S.-Mexico border wall.

He ignored public health experts warning Americans to avoid large gatherings by holding two large campaign events in Oklahoma and Arizona, parts of the country where coronavirus infections are surging.

With his rhetorical turn, Trump is feeding red meat issues to a base that helped spur his upset victory over Hillary Clinton in 2016. But he risks appearing to ignore larger issues that are jolting the country, like the pandemic and racial injustice, while underplaying economic issues, even though polling shows that to be an area where Trump performs relatively well.

“This might be the only path for him at this point,” said Dan Schnur, who served as a campaign adviser to Arizona Sen. John McCain and California Gov. Pete Wilson.

“Most of the center is no longer available to him. Motivating his base is not just his best available strategy. It might be the only one.”

The president’s advisers believe there are few undecideds when it comes to Trump, with only a sliver of voters who may change their mind and warm to him.

The more effective use of resources is to make sure those who like him turn out to vote, according to campaign and White House officials who spoke on condition of anonymity to describe internal strategy.

Trump takes a measure of comfort in the fact that he found himself in a similar position in 2016. Polls throughout his race against Clinton showed him with a deficit, often just as wide as some polls now suggest, before he closed that gap in the final days of the campaign as the base coalesced around him.

As he did with Clinton, Trump has tried to drive up Democratic rival Joe Biden’s negatives, pushing unsubstantiated claims about his mental acuity and his son Hunter’s business dealings. But Trump so far has had little success in driving Biden into the deeply negative territory where Clinton found herself.

Biden’s campaign is confident that the circumstances for Trump, who now has a well-established political record, have complicated his ability to drag down his opponent with a barrage of attacks.

Trump hopes to get as much of that base to turn out while persuading the voters who have shown tepid enthusiasm for Biden to stay home. Indeed, while many national and battleground polls show Trump trailing Biden, surveys have suggested that some of the former vice president’s support is lukewarm.

Trump’s team feels confident that approximately 40% of the electorate supports him and notes his approval rating has remained unusually stable during his term. The president’s campaign advisers believe it comes down to getting a bigger proportion of the smaller group of people who love Trump to turn out than the larger group of voters who express tepid support for Biden.

With that in mind, the campaign has renewed its focus on plays to please the base. Among them: the border wall and other hard-line immigration executive orders; a promise to produce a list of conservative Supreme Court nominees; public consideration of acknowledging Israel’s annexation of parts of the West Bank to satisfy evangelicals; and, most strikingly, a focus on reopening the nation’s economy over publicly dwelling on the pandemic.

South Carolina Sen. Lindsey Graham, one of Trump’s closest allies in Congress, said Trump can win with “a little more message discipline” and a focus on policies that separate him and Biden.

“Just make it more about policy and less about your personality,” Graham told reporters.

Last weekend, Trump held a big-arena rally in Tulsa, Oklahoma, that drew a relatively sparse crowd for a president who is used to overflow audiences.

He then took part on Tuesday in a jam-packed event at a Phoenix megachurch — albeit in a smaller venue — for young conservatives. Both are the sort of events that Trump is counting on helping him turn the tide.

“Nov. 3 is a big day,” Trump told attendees at a Students for Trump event in Phoenix. “Get out. Get the parents, get the friends, get the husband, get the wife, get everybody.”

Arizona has emerged as a growing hot spot for the virus, and Phoenix’s Democratic mayor, Kate Gallego, implored that such an event — most participants declined to wear masks and didn’t practice social distancing — could not be safely carried out.

Karen Kedrowski, a political scientist at Iowa State University, said such events help Trump echo ardent conservatives’ frustrations that the lockdown has lasted too long. But Trump’s attempt to amplify his message through mass gatherings is perilous.

“The president sees the need to electrify his base,” Kedrowski said. “But what happens to the president if two weeks from now rally attendees are becoming sick and spreading the virus in their communities?”

During the event, Trump, who had stirred up controversy by using the racist phrase “kung flu” to describe COVID-19, was reflecting on the many names he’s heard the coronavirus called.

When he heard the pejorative yelled from the crowd, Trump smiled and said it, too. The audience roared in approval.

Biden surrogates, including vice presidential contender Sen. Tammy Duckworth, called out Trump for it. Still, Biden is being careful not to get dragged into a culture war.

“We have not let Donald Trump’s antics distract us from our message,” Sanders said. “At the same time, we’re not going to sit back and allow him to disparage large swaths of the electorate.”