BAGUIO CITY—Two of seven cadets of the Philippine Military Academy (PMA), who are now undergoing court martial proceedings for the hazing death of Cadet Fourth Class Darwin Dormitorio in 2019, will be charged with murder, along with three military doctors who allegedly failed to treat his injuries properly.

Cadets Third Class Shalimar Imperial Jr. and Felix Lumbag Jr. were directly responsible for the injuries that led to Dormitorio’s death, according to a June 5 resolution from a panel of Baguio prosecutors who reviewed the complaint filed last year by police and Dormitorio’s family.

Imperial and Lumbag were transferred to Camp Aguinaldo in January with five other cadets who were accused of maltreating the plebe (freshman cadet) months after Dormitorio and members of PMA Class of 2023 were incorporated into the cadet corps. 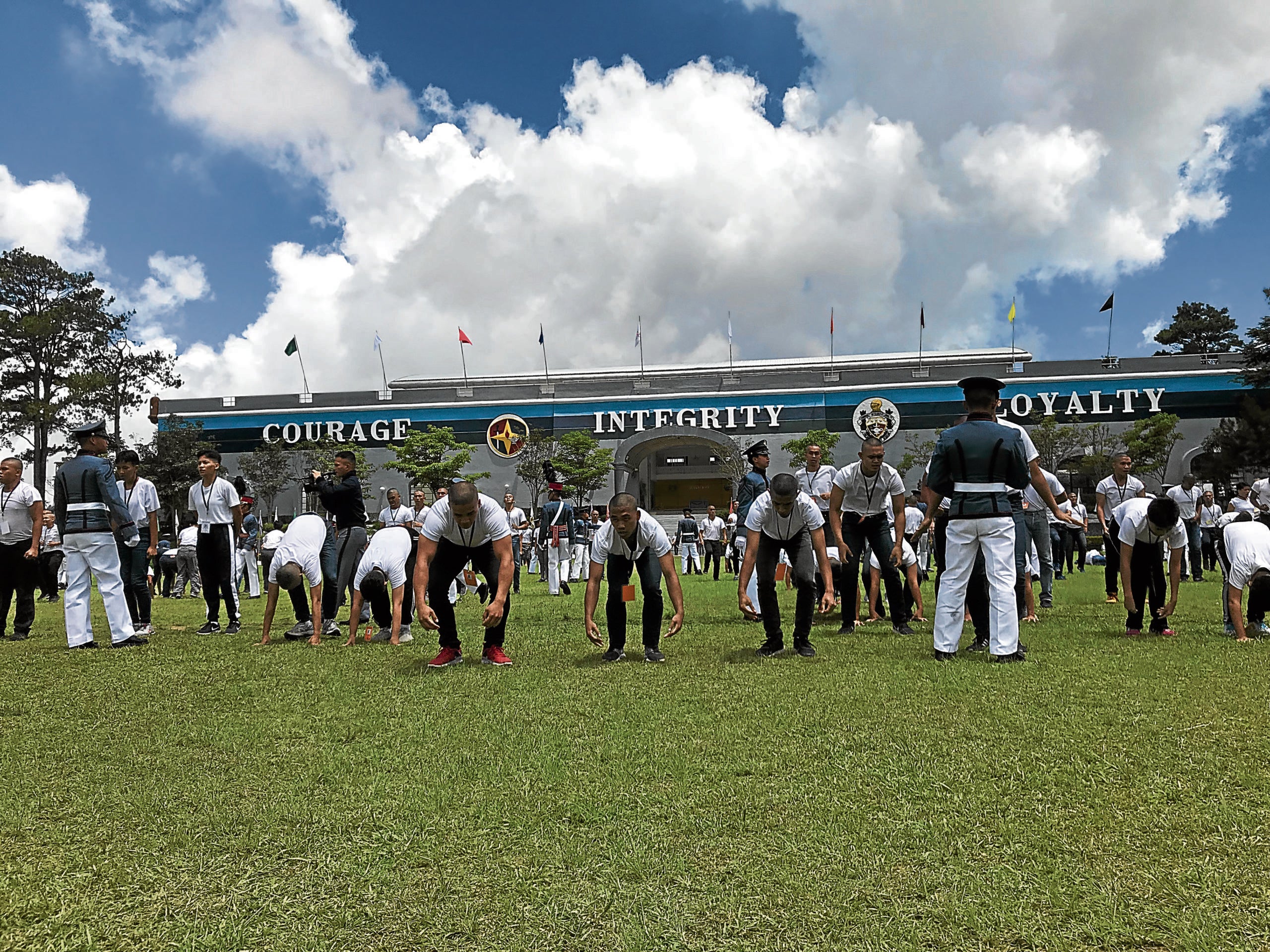 FUTURE OFFICERS The late cadet Darwin Dormitorio was among these young men and women who entered the Philippine Military Academy in Baguio City on June 1, 2019, and aspired to become officers of the Armed Forces of the Philippines. —VINCENT CABREZA

Navy Capt. Cheryl Tindog, PMA spokesperson, said the cadets would be surrendered to a civilian court should it require their presence although they were standing trial in a military tribunal.All of the cadets insisted they were not directly responsible for the murder of Dormitorio.

The 20-year-old “was found unconscious in his room and would later be pronounced dead on arrival at [PMA Station Hospital] at 5:15 a.m. on Sept. 18 last year,” according to the 66-page resolution issued by the city prosecutor’s office.

Before he was taken to the hospital, Dormitorio had been vomiting and was confined to quarters after he was diagnosed with a urinary tract infection by PMA doctors.

An autopsy indicated that he died of internal injuries, the prosecutors said.

His medical history at the academy showed that he had been confined and treated at the PMA hospital for several days in August after he was beaten for the first time allegedly by Lumbag and Imperial.

The panel, composed of Assistant Prosecutors Margarita Manalo, Erwin Sagsago and Philip Kiat-ong, examined military protocols and cadet traditions which contributed to the “mishandling of facts and decision-making” that led to Dormitorio’s death.

They said the beating and harassment suffered by Dormitorio were due to a disavowed cadet tradition called “katay,” which grants upperclassmen the authority to punish plebes for minor infractions like sloppiness.

“The nature of the relationship between a plebe and his upperclassmen plays a crucially important role,” the panel said.

It said every plebe “is compelled to follow any order given by his or her upperclassmen and would not be able to question nor defend himself or herself once the cadet is subjected to katay.”

The tactical officers, who were charged with failing to act on the apparent hazing, were cleared. But some of their actions were examples of how bad judgment led to Dormitorio’s death, according to the prosecutors.

One of Dormitorio’s suspected tormentors was investigated in August last year for punching the plebe, but the transmission of this report was delayed because the officer in charge was on a paternity leave until September, they said.

Three PMA doctors, who had been relieved from the academy, were equally liable for Dormitorio’s murder, the prosecutors said.

Capt. Flor Apostol, Maj. Ofelia Beloy and Lt. Col. Ceasar Candelaria, “grossly failed to provide [Dormitorio with] adequate medical care,” which was “patently and unmistakably indispensable in the resulting death of their patient,” they said.

While the PMA hospital may not be well equipped, the doctors could have referred Dormitorio to a Baguio hospital had their medical examination been “comprehensive,” the panel said.

The prosecutors detailed the supposed brutality and treachery of Dormitorio’s fellow cadets for the series of katay that thrust PMA “into the limelight for the wrong reasons.”

“In this case, Dormitorio declared that he was punched on Aug. 20; he was found to have suffered a broken jaw on Sept. 6; he was assaulted on Sept. 14, and was likewise maltreated on the morning of Sept. 17,” they said.

They added: “By all accounts, the practices, which the law outlaws, were in fact performed upon Dormitorio … who must endure such practices or rites for a particular duration … to continue being a member of the cadet corps of the Armed Forces of the Philippines.”

Of the five other cadets accused of maltreating Dormitorio, Cadet Second Class Christian Zacarias would be charged with serious physical injuries for allegedly kicking the plebe’s head on the night before he died.

Cadet Third Class Julius Carlo Tadena would be charged with hazing after he allegedly used a taser on Dormitorio that left second degree burns.

The prosecutors said Tadena’s actions appeared to “satisfy some sordidly morbid delight in watching the cadets react and struggle with the electrocution.”

The charges against Cadet First Class Axl Rey Sanopao and Cadets Third Class Rey Volante and John Vincent Manalo would no longer be pursued for “lack of probable cause.”

The dereliction of duty charges filed against Lt. Gen. Ronnie Evangelista, former PMA superintendent, and Brig. Gen. Bartolome Bacarro, former commandant of cadets, were dismissed by the panel. Both officials resigned after their investigation found the upperclassmen liable for Dormitorio’s death.