Is gov’t playing with traditional jeepney drivers? A lawmaker thinks so 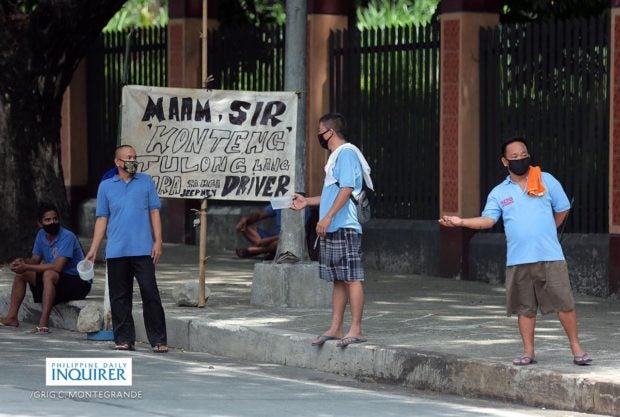 Traditional jeepney driver Samuel Narag, 56 years old, joins other drivers belonging to different jeepney operators and drivers associations in begging for alms along C.P. Garcia Avenue in Diliman, Quezon City on Monday, June 22, 2020, due to lack of income for not being able to ply their routes for three months. INQUIRER FILE/GRIG C. MONTEGRANDE

Bayan Muna Rep. Ferdinand Gaite raised this question on Thursday, pointing out the varying statements of government officials regarding the resumption of traditional jeepney operations amid the pandemic.

On Sunday, Delgra said the operation of traditional jeepneys is still in their timeline – at least before June ends.

“The contradicting statements of the Palace and the LTFRB, and their apparent exploitation of the pandemic to push the jeepney phaseout are putting the lives and livelihood of thousands of jeepney drivers and operators in limbo,” Gaite stressed.

On Monday, some modern jeepneys have started operations in Metro Manila as quarantine restrictions due to the COVID-19 pandemic have been relaxed. However, traditional jeepneys and UV Express vehicles remained in their parking lots as government still barred their return.

Delgra explained that traditional jeepneys and UV Express vans are least prioritized amid concerns on passengers’ seating arrangements – where commuters are seated side-by-side and facing each other, which clearly violates health protocols put in place to avert the coronavirus transmissions.

Roque, meanwhile, has said: “I think the UV Express stands a better chance than jeepneys. Because the sitting arrangement is you’re all facing the same direction and there are no passengers facing each other.”

Ibon Foundation recently pointed out that fears of coronavirus spreading among passengers in traditional jeepneys are unfounded. The group instead emphasized that several studies even point to air conditioning systems, which are found in modern jeepneys and buses, as a cause for transmissions in an enclosed space.

READ: Traditional jeepneys likely to be safer from virus spread than air-conditioned ones – Ibon

Earlier Thursday, the Department of Transportation (DOTr) increased the equity subsidy for traditional jeepney operators who would choose to switch to the modernized versions from P80,000 to P160,000.

“We condemn this callousness to the plight of our jeepney drivers and operators. Only for the sake of creating profits for the big manufacturers of ‘modern jeepneys,’ the government continues to ignore the public’s clamor for the return of jeepneys,” he noted.

“Again we reiterate our call for the immediate Balik Pasada of jeepney. We also challenge the IATF, DOTr, and the LTFRB to issue the necessary memo to grant the jeepneys’ return to the streets, if not niloloko lang nila ang mga tsuper at operators,” he added.

(Again we reiterate our call for the immediate resumption of trips of jeepneys. We also challenge the IATF, DOTr, and the LTFRB to issue the necessary memo to grant the jeepneys’ return to the streets, if not, then they are only fooling drivers and operators.)

During and after the lockdown, several jeepney drivers were seen along the road begging for alms as they have been without income throughout the imposed community quarantines.

While they were included in the government’s social amelioration program, several sectors believe that the P5,000 to P8,000 grant is not enough especially since Ibon estimated that jeepney drivers have already lost P78,000 worth of income since the lockdown started in March — or P26,000 per month.