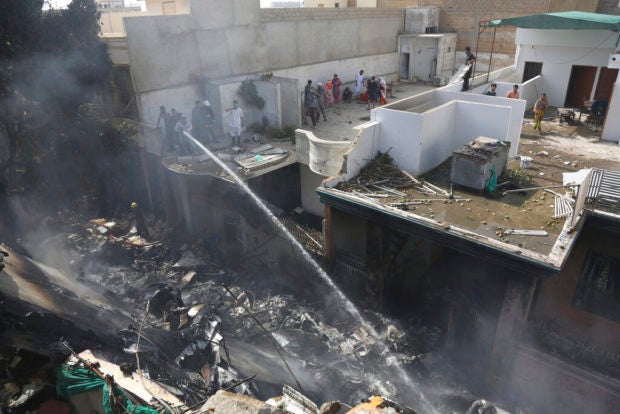 In this file photo, fire brigade staff try to put out the fire caused by a plane crash in Karachi, Pakistan, Friday, May 22, 2020. An aviation official says a passenger plane belonging to state-run Pakistan International Airlines carrying more than 100 passengers and crew has crashed near the southern port city of Karachi. There were no immediate reports on the number of casualties. (AP File Photo/Fareed Khan)

ISLAMABAD — Pakistan’s state-run airline announced Thursday it would ground 150 pilots on charges they obtained their pilot licenses by having others take exams for them.

Abdullah Hafeez, a spokesman for Pakistan International Airlines, said the decision comes after a probe into last month’s PIA crash that killed 97 people in the city of Karachi.

Hafeez, without sharing specific details, said a process to remove the 150 pilots who possessed tainted licenses had been initiated.

“We will make it sure that unqualified pilots never fly aircraft again,” he told The Associated Press.

The move by PIA to ground the pilots comes a day after the country’s aviation minister, Ghulam Sarqar Khan, said 262 out of 860 pilots in the country had “fake” licenses. He made the revelation while presenting preliminary findings to the parliament of a probe into the May 22 Airbus A320 aircraft crash in Karachi.