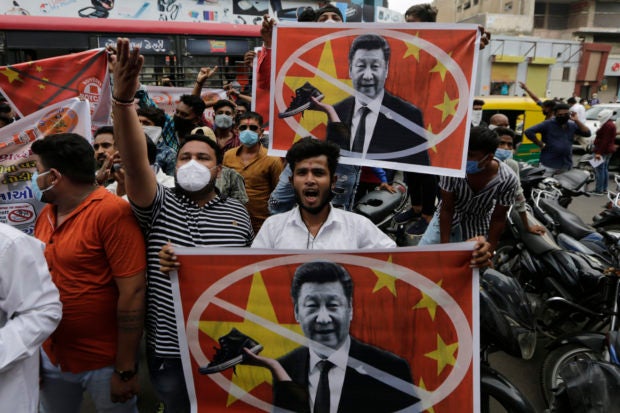 Karni Sena supporters hold banners featuring Chinese President Xi Jinping and shout slogans during a protest against China in Ahmedabad, India, Wednesday, June 24, 2020. Chinese and Indian military commanders have agreed to disengage their forces in a disputed area of the Himalayas following a clash that left at least 20 soldiers dead, both countries said Tuesday. The commanders reached the agreement Monday in their first meeting since the June 15 confrontation, the countries said. (AP Photo/Ajit Solanki)

The trip by Gen. M.M. Naravane to the Ladakh region on Wednesday and Thursday came as two Indian security officials reported that Chinese soldiers have entered Indian-controlled territory in another strategically important area despite ongoing talks between military commanders and diplomats to ease tensions.

Both officials spoke on condition of anonymity because of the sensitive nature of the information and in keeping with government policies. The Indian army has not commented on the reported incursion.

The officials said Chinese troops had advanced in the Depsang Plains, also in Ladakh, in violation of border management and jointly agreed patrolling protocols between the two countries.

Depsang is a strategically important area close to Daulat Beg Oldie, where India in recent years made an airstrip close to China operational.

The Indian officials said a similar Chinese entry in the area took place in 2013, but the two sides resolved it through diplomatic channels.

The Indian officials said the current standoff began in early May when large contingents of Chinese soldiers entered deep inside Indian-controlled territory at three places in Ladakh, erecting tents.

They said the soldiers ignored repeated verbal warnings, triggering a yelling match, stone-throwing, and even fistfights in at least one place along Pangong Lake, the site of several such confrontations in the past.

Rahul Bedi, a defense analyst, said that despite claims of mutual disengagement, tensions between Indian and Chinese forces are still high.

“India is trying to match China’s military assets in the region. The Chinese have ingressed disputed areas where both sides are trying to maneuver the situation to their advantage,” Bedi said, adding that he didn’t see a quick end to the crisis.

China on Wednesday again accused India of provoking the border clash but urged New Delhi to “meet China halfway” in restoring peace and stability along their disputed frontier.

Indian and Chinese military commanders agreed on Monday to disengage their forces in their first meeting since the confrontation.

On Wednesday, Indian and Chinese officials participated in a video conference and reaffirmed that both sides should sincerely implement the understanding of disengagement and de-escalation reached by their army commanders, Indian External Affairs Ministry spokesman Anurag Srivastava said in a statement.

The clash was the deadliest between the two countries in 45 years. India said 20 of its soldiers died. China has not released any information on casualties on its side.

Soldiers brawled with clubs, rocks, and their fists at 4,270 meters (14,000 feet) above sea level, but no shots were fired, Indian officials have said. The soldiers carry firearms but are not allowed to use them under a previous agreement in the border dispute.

Indian security officials said the fatalities were caused by severe injuries and exposure to subfreezing temperatures.

The Galwan Valley, where the clash occurred, falls within a remote stretch of the 3,380-kilometer (2,100-mile) Line of Actual Control — the border established following a war between India and China in 1962 that resulted in an uneasy truce.