S. Korea, US say effort to disarm NK goes on 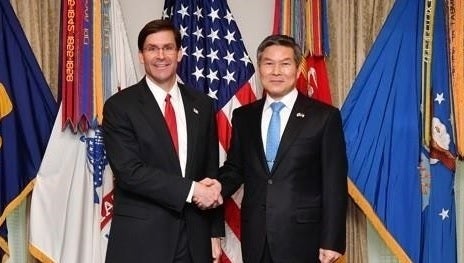 SEOUL — Defense chiefs of South Korea and the US, Jeong Kyeong-doo and Mark Esper, respectively, reaffirmed Thursday the commitment to defending the Korean Peninsula, championing the bolstering of “diplomatic efforts for the complete denuclearization” of North Korea, in a joint statement to mark the 70th anniversary of the outbreak of the 1950-53 Korean War.

Pyongyang should deliver on its promises to denuclearize and stop waging hostilities against Seoul, as worded both in the joint statement from the 2018 Washington-Pyongyang summit and 2018 inter-Korean military accord, according to the statement.

The US State Department told Radio Free Asia it was ready to reach a “balanced agreement” on all of the commitments exchanged at the Singapore summit, adding Washington was keen to negotiate with Pyongyang for its “brighter future.”

The State Department however called on Russia and China, the North’s two biggest backers, to stick to UN sanctions enforcement on Pyongyang, amid the Russian Foreign Ministry’s latest move to have the UN Security Council adopt resolutions to loosen some sanctions on the cash-strapped communist regime.

The North, in a dramatic pivot after blowing up an inter-Korean liaison office and reinstalling anti-Seoul propaganda loudspeakers along the border, softened its position, with leader Kim Jong-un announcing Tuesday a suspension of military action against the South at its Central Military Commission meeting.

Pyongyang soon after withdrew the loudspeakers and altogether halted the anti-Seoul propaganda, putting on hold the inter-Korean relations from spiraling into full-on confrontation.

A senior official at the ministry, however, said he had heard nothing about whether the two Koreas were involved in behind-the-scenes talks at the moment.

“With tensions running just high enough to keep Seoul and Washington on their toes, Pyongyang is buying time, to make a ‘move on our moves,” said Kim Hyung-suk, who served as vice unification minister between 2016 and 2017.

Seoul and Washington would not go easy on Pyongyang if it strikes again. Leader Kim knows that and is trying to space out the strikes to retain the upper hand, according to the vice minister.

The South and US will continue seeing tensions swing in the runup to the US presidential election in November, after which the North would most likely seek serious talks with the US one way or another, he added.

“And because they open talks for talks,” Cho, a first-term opposition lawmaker sitting at the Parliamentary Foreign Affairs and Unification Committee, said, referring to President Moon and his senior aides loyal to the pro-engagement policy on the communist regime.