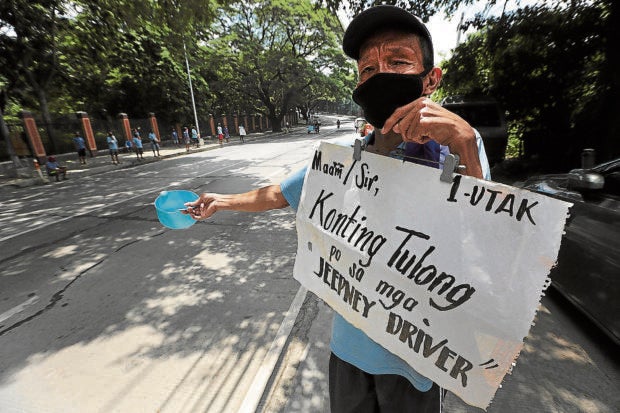 REDUCED TO MENDICANCY “A little help for us jeepney drivers,” says the cardboard sign carried by Samuel Narag as he begs for alms, together with other jeepney drivers displaced by the coronavirus quarantine, on C. P. Garcia Avenue in Diliman, Quezon City, on Monday. Other drivers have threatened mass protests if the government continues to refuse to allow jeepneys back on the road. —GRIG C. MONTEGRANDE

MANILA, Philippines — UV Express vans and conventional jeepneys will be allowed back on the road next week, the Land Transportation Franchising and Regulatory Board (LTFRB) chief told lawmakers on Wednesday.

“Next week for both UV and traditional jeepneys,” Delgra replied.

“For Monday, slots will be opened for UV and then followed by the traditional jeepney,” he added, without providing an exact date for the return of jeepneys.

Lockdown measures imposed three months ago to halt the spread of the new coronavirus barred most public transport, forcing the gaudily decorated jeepneys off the road.

The relaxation of quarantine measures on June 1 allowed some public transport to resume operations, but not the jeepneys, whose two facing benches, though far enough from each other to be considered risky for virus transmission, had been cited by transport officials as reason for putting them on the bottom-most rung of their economic reopening plan.

Jobless for three months, many of the jeepney drivers have resorted to begging in the streets, displaying cardboard signs bearing pleas for money and food. A few have been arrested and charged for allegedly flouting quarantine measures.

Earlier on Wednesday, jeepney drivers threatened to burn their vehicles in the streets as a last resort if transport officials continued to insist on removing them from the road in the name of the battle against the new coronavirus pandemic.

Malacañang, however, said UV Express vans stood a better chance of being allowed to resume operations rather than jeepneys because of the bus-like seating on the air-conditioned vehicles that made them less risky for transmission of the COVID-19 causative virus.

In an interview with the Inquirer, Efren de Luna, president of the Alliance of Concerned Transport Organizations, said jeepney drivers would “do whatever it takes to defend their livelihood” if the Department of Transportation (DOTr) continued to give them the runaround on when they would be allowed to go work again.

“That’s how dire the situation is. Because what will we do with our vehicles if the government will no longer allow them back on the road?” De Luna said.

Well before the outbreak began, jeepneys had already been threatened by a government program to modernize public transport and phase out aging vehicles. The diesel-powered jeepneys, which ply inner-city routes where thousands of businesses are located and run round the clock, cough out dark fumes, which have been blamed for Metro Manila’s notoriously polluted air.

Not prelude to phaseout

Malacañang and the DOTr maintain that the ban on jeepneys is not a prelude to a phaseout and that they will be allowed back on the road if the selected public transport running since June 1 prove to be inadequate to meet commuter demand as more quarantine restrictions are lifted.

But De Luna noted that officials’ actions contradict their words.

“At first we were confident that the DOTr would keep their word. But now we’re seeing that on several of the routes we used to ply in Marikina, Quezon City and Manila, there are already buses there,” De Luna said.

“That’s what we’re afraid of, that they’re secretly implementing the phaseout and that we’re really waiting for nothing,” he added.

De Luna urged transport officials, particularly Delgra, to “come clean” and tell the jeepney drivers if they were still part of the government’s plan so they could make their own plan.

“The problem with these officials is that they do not understand the hardships and sufferings of jeepney drivers. They do not know hunger or hear children cry every day because they have nothing to eat, or how it feels to live on vehicles because they’re not able to make rent,” De Luna said.

LTFRB’s “incoherent” policies. He warned that jeepney drivers would fight relentlessly for their livelihood.

“We will burn our jeepneys in the streets as our last card,” De Luna said.

Earlier, the LTFRB said it was studying whether to allow jeepneys to resume operations and that it would announce its decision this month.

But in a television interview on Wednesday, presidential spokesperson Harry Roque said UV Express vans had a better chance than jeepneys of winning government permission to resume operations.

He explained that on UV Express vans, all passengers face forward. “No passengers [are] facing each other,” he said.

Roque, however, made no reference to jeepney-like seating on some newer passenger vehicles that the government allowed to resume operations on Monday.

The government insists on calling those vehicles “modern jeepneys” although they look like truncated buses that in no way resemble the old “king of the road.”

The jeepneys evolved from US military jeeps that American forces left behind in the Philippines after World War II. The vehicles were modified and then were reproduced, many based on a secondhand truck chassis, and for decades were the most popular form of public transport in the country and a showcase of Philippine culture on wheels.

As a cultural icon, the jeepney is irreplaceable, but even the Department of Health sees difficulty in retrofitting the vehicles because their drivers have not been earning for the last three months.

Health Undersecretary Maria Rosario Vergeire on Wednesday said the seating on jeepneys needed to be reconfigured so that passengers would face forward, as on buses.

Vergeire, however, stopped short of recommending a solution, pointing out that it was the DOTr’s job to ensure compliance with minimum health standards in the public transport sector.

—With reports from Krissy Aguilar, Jovic Yee and AP