Trump threatens force against protestors in US capital

WASHINGTON — President Donald Trump delivered a strong warning Tuesday to protestors in Washington, vowing to use force if they tried to create a police-free “autonomous zone” in the US capital. 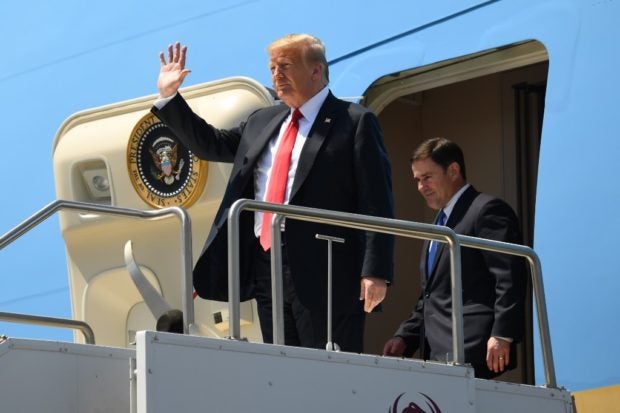 In a series of tweets that earned the US leader his own warning from Twitter for “abusive behavior,” Trump also threatened stiff prison sentences for “anarchists” who damage national monuments during a wave of nationwide demonstrations.

“I have authorized the Federal Government to arrest anyone who vandalizes or destroys any monument, statue or other such Federal property in the U.S. with up to 10 years in prison,” Trump tweeted Tuesday morning.

“There will never be an ‘Autonomous Zone’ in Washington, D.C., as long as I’m your President. If they try they will be met with serious force!” he wrote.

Twitter announced that Trump’s use of threatening language violated its policies, and placed a warning tag on the “serious force” tweet that required users to click on it to be able to see Trump’s words.

The threats came one day after police used pepper spray to disperse demonstrators who tried to topple a statue of a former president in a park next to the White House.

Protestors attempted to pull down the monument to Andrew Jackson, who was president from 1829 to 1837, depicted astride a rearing horse.

The statue was targeted for Jackson’s history as a slave owner and his brutal policies toward Native Americans.

Beginning in 1830 he forced the relocation of tens of thousands of native Americans from the southeast across the country on what was called the Trail of Tears.

Police forced the protesters away using batons and pepper spray, but only after the monument was heavily spray-painted with epithets and slogans.

Demonstrations calling for racial justice have swept the United States since the May 25 death of George Floyd, a 46-year-old black man killed by a white police officer in Minneapolis, Minnesota.

Some of the protests have been marked by looting, vandalism and violence.

In Seattle, the mayor announced that police planned to take control back of the six-block “Capitol Hill Autonomous Zone” after a person was shot dead on Saturday.

Some protestors in Washington have reportedly attempted to set up tents in parks near the White House, and the letters “BHAZ,” for Black House Autonomous Zone, were painted on a nearby church.

On Tuesday police created a broad security perimeter around the White House and surrounding parks, including the recently dubbed “Black Lives Matter Plaza” by blocking off road.

Trump left the city Tuesday morning on a trip to Arizona for a speech to supporters.

“We are looking at long term jail sentences” for those who damage federal monuments, he said. “These are not protestors by the way. These are anarchists and other things.”