SWS: 43% of working-age Filipinos expect quality of life to worsen in next 12 months

MANILA, Philippines — Nearly half of working-age Filipinos expect their quality of life to worsen in the next 12 months, making its net optimism score the worst in survey history, a survey of the Social Weather Stations (SWS) revealed Tuesday. 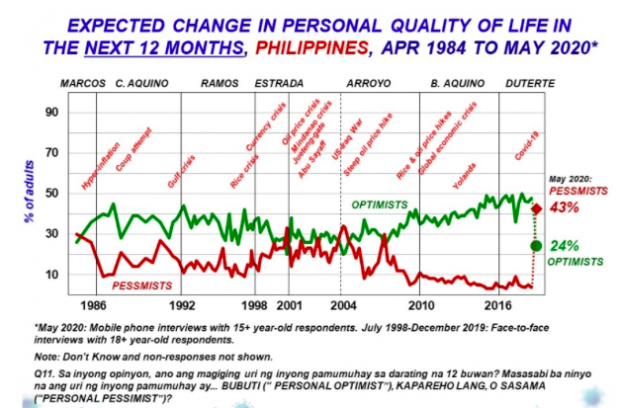 The survey, conducted from May 4 to May 10, asked some 4,010 Filipinos aged 15 years old and above what they thought their quality of life would be in the next 12 months.

The number of those who expected their lives to worsen (43%), which the SWS tagged as “pessimists,” broke the previous highest record of 34% in March 2005, making it a new peak in the 37-year history of SWS, comprising 135 surveys on the topic, the polling body said.

Meanwhile, the 24% who believed their lives would improve, dubbed by the SWS as “optimists,” is just four points above the record-low of 20% in October 2000 and March 2005.

“Net Optimism is rarely negative. Only 12 out of the 135 SWS surveys since 1984 have a score of net zero or lower,” the polling body said.

“Negative ratings in 1984, 2000, and 2005 were associated with political unrest in the late Marcos-era, the impeachment crisis of Joseph Estrada, and the controversial 2004 election of Gloria Macapagal-Arroyo,” it added.

SWS said the net optimism is the result of low or very low scores in all areas, especially as it reached record-lows in the Visayas and Mindanao at -37 and -32, respectively.

Meanwhile, SWS said the score in Mindanao plummeted from +45 in December to record-low –32 in May. The previous record was –30 in December 2004.

The SWS survey was conducted using mobile phone and computer-assisted telephone interviewing amid the coronavirus disease 2019 pandemic in the country.