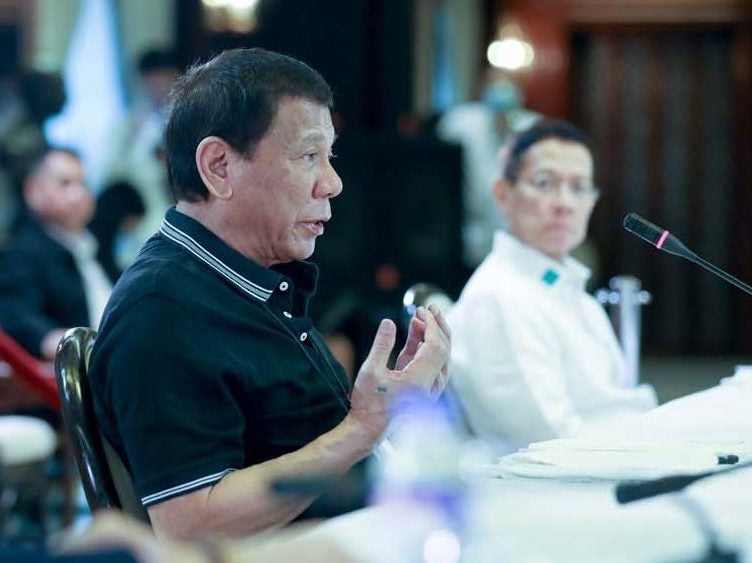 MANILA, Philippines — President Rodrigo Duterte is “very close” with Health Secretary Francisco Duque III’s brother and that he knows that the family will not steal from the government as they are already well-off, presidential spokesperson Harry Roque said Tuesday as the chief executive once again defended his embattled health chief.

Duque has long been under fire for various issues in connection with the Department of Health’s (DOH) handling of the COVID-19 crisis.

He and other DOH officials are facing an Ombudsman investigation involving the purchase of 100,000 test kits, the use of UP-invented test kits, and other alleged irregularities committed by DOH officials, including Duque amid the pandemic.

But once again, Duterte stood by his health secretary, even saying in a taped speech aired Monday night that he would “stake his reputation” as President on Duque, giving assurances he hasn’t stolen anything from the country’s coronavirus war chest.

Asked to explain why Duterte continues to trust Duque despite the incessant controversies, Roque cited the President’s “closeness” and “deep friendship” with the health chief’s brother, Gonzalo “Gonz” Duque.

“He is very close to the brother of Sec. Duque, Atty. Gonz Duque,” Roque bared in an interview over CNN Philippines’ The Source.

“Atty. Gonz Duque was the only one who welcomed the President in Dagupan City when he ran as President. And of course the friendship of the President and Atty. Duque goes way back from his presidency. They’ve known each other for a long time, they are both San Beda Law graduates. I can only say that they have a very close and deep friendship,” he added.

Roque noted that the President knows the Duque family “very well” and that they don’t need to steal from the government as “they have the wealth.”

“They are very wealthy owning a school, a university and various other businesses in Dagupan,” he said.

The Palace official also said that Duterte only met the health chief once “by accident.”

“He (Duterte) mentioned that when he appointed Sec. Duque, he only met him once in a hotel by accident and it is the brother whom he knows very well,” Roque said.

Nonetheless, Roque said that Duterte believes in the integrity of his Health Secretary because “he doesn’t see anything that has been criminally committed” by Duque himself.

“He has said that people make mistakes and for as long as these are honest mistakes he’s willing to go beyond these mistakes,” he added.

He also assured that Duterte’s repeated expression of trust and confidence in Duque will not affect the Ombudsman probe.

“The Ombudsman is an independent body. it is headed by a seasoned litigator and former supreme court justice. I think he can discern facts for himself and I think he will proceed with his own probe regardless of what the president has said” Roque said.