UN: Pandemic appears to be peaking in several big countries

GENEVA — A record level of new daily COVID-19 cases worldwide could suggest the pandemic is peaking in some large countries, even as the coronavirus has become “well established” in some regions, the World Health Organization’s emergencies chief said Monday. 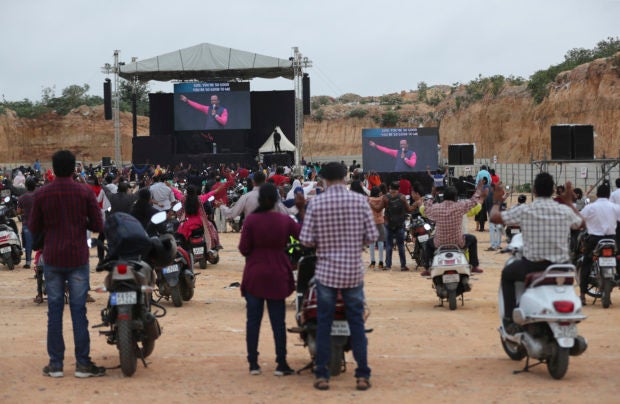 Faithful on their two-wheelers maintain social distancing to prevent the spread of coronavirus as they listen to a pastor during a drive-in mass at Bethel AG Church in Bengaluru, India, Sunday, June 21, 2020. India is the fourth hardest-hit country by the COVID-19 pandemic in the world after the U.S., Russia and Brazil. (AP Photo/Aijaz Rahi)

At a media briefing on Monday, Dr. Michael Ryan said “the numbers are quickly rising because the epidemic is developing in a number of populous countries at the same time,” even as it appears to be stabilizing and even reducing in parts of Western Europe.

In its latest Situation Report on COVID-19 late Sunday, WHO reported the largest single-day increase in coronavirus cases by its count — more than 183,000 new cases in a 24-hour period. That was underpinned by over 54,700 new cases in Brazil and more than 36,600 in the United States.

Some countries have attributed their increased caseload to more testing, including India — which counted more than 15,000 new cases over the 24-hour span — and the U.S. But Ryan dismissed that explanation.

“We do not believe this is a testing phenomenon,” he said, noting that many countries have also noted marked increases in hospital admissions and deaths — neither of which can be explained by increased testing.

“There definitely is a shift in that the virus is now very well established,” Ryan said. “The epidemic is now peaking or moving towards a peak in a number of large countries.” The situation was “definitely accelerating” in a number of countries, including in South Asia and the Americas, he said.

He aired new concerns about rising case counts in the Americas, and cited a record jump of over 54,000 new daily cases in Brazil. There, nearly one in three people tested overall have turned up positive — suggesting that the case counts may be going unnoticed.

Still, the overall pattern in Brazil was “relatively stable” in June, he said, adding that the 54,000 new cases in a 24-hour period “needs to be examined carefully” to determine the reason for the spike.

Brazil still has “relatively low” testing per population, Ryan said, and its rate of positive cases was 31% — far higher than the 5% rate generally found in countries that “are detecting all of their cases.”

“Up to nearly one-third of all tests are positive, which does indicate that there is under-detection or under-reporting of cases overall,” he explained.
As for Africa, Ryan cited a “mixed” situation but that numbers are “generally on the rise,” noting increased cases in South Africa, Benin, Burundi, Eritrea and Ethiopia — the home country of WHO Director-General Tedros Adhanom Ghebreyesus. Ryan said large cities appeared to be more affected.

“Africa, at this point, is still avoiding the large proportion of deaths that have been associated with this disease in other continents,” he said, noting “caveats” such as that testing isn’t as frequent in Africa as elsewhere.

Africa’s hospitals “do not appear in most countries to be overwhelmed,” he said, noting exceptions in places like highly-populated Lagos, Nigeria.

“There’s no room for complacency on the African continent,” Ryan said. “Will Africa be the next epicenter for this pandemic? I certainly hope not, because the health systems in Africa in general are weaker than in other parts of the world.”