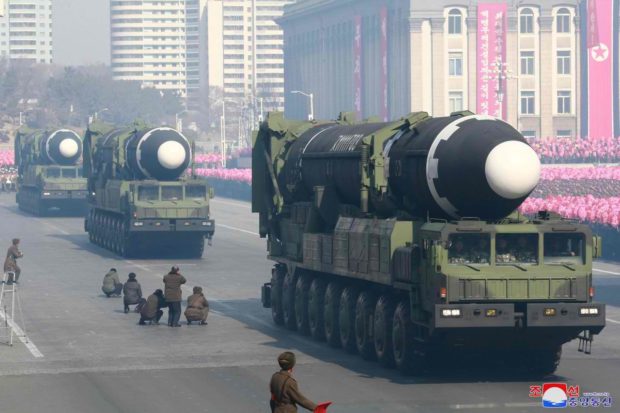 SEOUL — North Korea is preparing to hold a large-scale military parade to mark October’s 75th anniversary of the founding of the ruling Workers’ Party, the defense ministry said Monday, amid speculation that the communist nation could use the event to showcase new strategic weapons.

In a report to the parliament’s defense committee, the ministry said new buildings were spotted under construction at the Mirim airfield in Pyongyang, a possible sign the North could showcase an intercontinental ballistic missile (ICBM) or a submarine-launched ballistic missile (SLBM) on Oct. 10.

“The North Korean military is continuing activities to prepare for an event to celebrate the 75th anniversary of the establishment of its party,” the ministry said in the report, adding that repair work for Kimilsung Square was also seen to be under way.

The North has used military parades on important national days to flex its military muscle by displaying newly developed weapons, including missiles. It usually holds bigger events to celebrate anniversaries every fifth or 10th year.

The ministry said no unusual movements have been detected in relation to the North’s nuclear program, but missile development activities have continued.

The assessment came amid a surge in cross-border tensions after North Korea blew up an inter-Korean liaison office in its border town of Kaesong last week in anger over anti-Pyongyang leaflets sent across the border by activists here.

The North has since threatened to send troops to disarmed border regions and abolish an inter-Korean tension-reduction deal signed in 2018.

South Korea and the United States have boosted their joint monitoring and intel-sharing in light of the North’s threats and will carry out their combined exercises this year at a level similar to last year’s, the ministry said. Yonhap