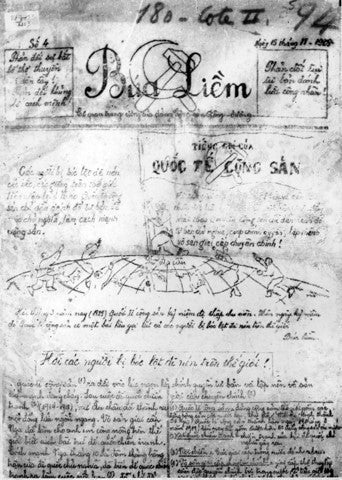 A copy of a 1929 November issue of Búa Liềm (Hammer & Sickle) by the Indochinese Communist Party, appealing for unity from the oppressed people all over the world. Viet Nam News/Asia News Network

HANOI — Ninety-five years ago on June 21, 1926, the first issue of Thanh niên (Youth) newspaper representing the voice of Vietnamese Revolutionary Youth League founded by Nguyễn Ái Quốc (aka Ho Chi Minh) was published, marking the birth of Vietnam’s revolutionary press as the country remained under the yoke of French colonial rule.

After Thanh niên, the Vietnamese founding father set up Kông Nông (Workers & Farmers) newspaper in 1926 to spread patriotism to the farmers and workers under the light of scientific socialism, Lính Kách Mệnh (Revolution Soldiers) in 1927 to encourage Vietnamese soldiers in the French colonial armies to stand up against the oppressor of their own people and Búa Liềm (Hammer & Sickle) newspaper – the mouthpiece of the Indochinese Communist Party – in 1929, among others.

According to the General Government of Indochina, by June 1936, there were some 230 newspaper, magazines and journals of all types circulating in Việt Nam.

In the following years, the revolutionary press incorporated political struggle with armed struggle, contributing to the building of armed forces towards the general uprising to seize back power for Vietnamese in August 1945.

During the resistance war against the French colonialists attempting to regain control over Indochina, after 1945, newspapers and magazines were born one after another to serve Party building, dissemination of Marxism-Leninism ideology and the Communist Party of Việt Nam’s civil rights revolution, inspiring resolution against imperialism and feudalism and preparing to take the opportunity to elevate the revolution to a new height.

During the war, revolutionary newspapers infiltrated every part of society and the country, from remote areas to places where the enemy held control and would be welcomed.

The Vietnamese press even reached the overseas audience of like-minded parties and friends around the world, helping the world understand the righteousness of Vietnamese people’s struggles and revolution.

On June 2, 1950, the Vietnam Journalists Association was established. In July 1950, the association joined the International Organization of Journalists.

On May 20, 1957, President of the Democratic Republic of Việt Nam Hồ Chí Minh promulgated Law No.100SL/L002, the first press law in the country. Chapter I of the law reaffirmed the responsibility of revolutionary newspapers and journalists: “The press under our administration, whether it belongs to a Government agency, a political party, a mass organization or a private agency, are all tools of the people’s struggles, must serve the interests of the Fatherland and of the people, and protect the people’s democracy, and support the Government of the Democratic Republic of Việt Nam.”

During the resistance war against American imperialism, the Vietnamese revolutionary press made great strides. The newspapers born during the anti-French resistance war evolved to serve the new mission.

In addition to the press agencies already available such as The People, People’s Army, the Voice of Vietnam radio, or Vietnam News Agency, a series of newspapers, magazines, radio channels emerged from the central level down to province and city and district level, unions and agencies and sectors. Several foreign-language newspapers were also published to introduce Vietnamese issues to international friends.

Over the decades, the revolutionary press has matured considerably in all aspects, becoming a “sharp instrument” of the Party and the State in propaganda, advocacy and education of the whole Party and State to help unite the people to overcome hardship and bring victories to the revolution.

In the wars against the French and the Americans, Vietnamese journalists weathered so many challenges and never shied from making sacrifices to be present on all fronts to report the developments of the nation’s struggles against foreign enemies.

Thousands of officials and journalists have stood side by side with the army and volunteers on all battlefields. Hundreds of journalist-martyrs have made brave sacrifices for the independence and freedom of the Fatherland.

Nearly a century since the first issue of the weekly Thanh niên newspaper was published, the Vietnamese revolutionary press has blossomed in number and quality.

According to data from the Ministry of Information and Communications, by the end of November 2019, the country had a total of 850 press units, including one news agency, 179 newspapers, 648 magazines, 23 independent online news sites; 72 certified radio and television broadcasters including two national broadcasters and 64 local broadcasters.

At all times, the Vietnamese revolutionary press has been the fastest and most popular information instrument, the means to keep in touch with the people and help solve emerging problems, while at the same time, it combats vile conspiracies and tricks of hostile forces as well as erroneous slants in thoughts and actions, and makes contributions to the organization of the people’s revolutionary action movement.

The Vietnamese press has effectively contributed to the protection of the national sovereignty over sea and islands, as well as the Party and State’s crusade against corruption and waste.

The press has promoted new economic and business models, new factors, good people and good deeds; promoted the upholding of the Vietnamese people’s values and cultural traditions, encouraging people to selectively acquire influences from the advanced nations of the world.

Reporters and editors have gotten in touch with contemporary life and social concerns, not backing down from danger, to produce quality work.

The press has fulfilled its duties as a bridge between the Party and the State and the public, becoming an important information channel for the Party and State in the making of policies and mechanisms that can respond to the interests and demands of the people.

However, the Vietnamese press has also revealed some limitations and shortcomings. Many newspapers are similar in content, expression or appearance or vague in identity and mission. Unhealthy competition for views and clicks has also led to the spread of misinformation and unverified reports.

To materialize the Party’s viewpoints on building and developing a press system to protect the nation and promote country-building efforts, the Government has issued planning for press agencies until 2025, aiming to reorganize the press system in the country.

In the new context, with relentless advancements of information technology and the fierce competition from and between various types of media, the revolutionary press of Việt Nam needs to continue cultivating its special role – serving as the voice of the Party, the State, the country’s various socio-political organizations and professions, a reliable forum of the people, protecting the interests of the people while being a sharp weapon in the fight against hostile forces and struggles against immoralities – to help realize the ambition of a prosperous and robust Việt Nam.