MANILA, Philippines — One can scarcely blame this fierce critic of President Rodrigo Duterte for preferring the company of cats to the humans who supervise her life in detention.

Five resident felines and eight strays regularly show up for treats at Sen. Leila de Lima’s quarters in the Philippine National Police Custodial Center at Camp Crame in Quezon City. She dotes on three ­— “Ghost,” “Bran” and “Blackie” — and keeps them well-fed.

By contrast, De Lima doesn’t even know the given names of the police officers assigned to her.

“I’m friendly to them, but not too friendly. I never engage in any real, much less lengthy, conversation with any one of them,” she told the Inquirer in a recent correspondence.

The senator, who entered her third year in detention on drug trafficking charges in February, said she didn’t dare partake of food rations from her custodians, either.

“My mantra in detention is: ‘Don’t trust. Don’t fear. Don’t beg,’” she said, borrowing the title of a book about the “Arctic 30” activists who were imprisoned in Russia after their 2013 protest against the first offshore oil rig in Arctic waters. 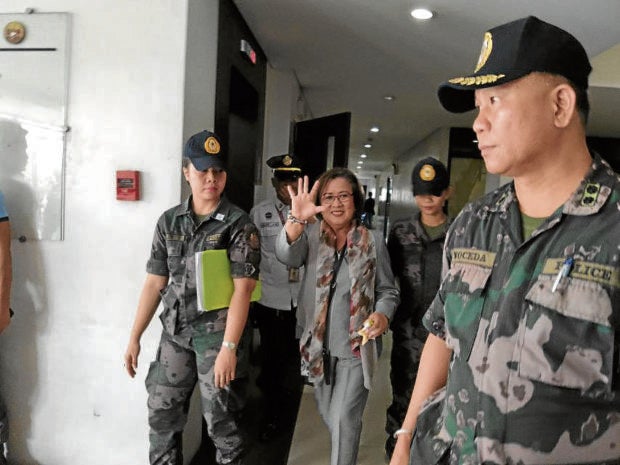 EYES ON HER EVERYWHERE Sen. Leila de Lima, shown here during one of her court appearances, is receiving visitors again after almost two months in isolation at the Philippine National Police Custodial Center. —OFFICE OF SEN. LEILA DE LIMA

That stance left her with no one to talk to “except the cats” for almost two months beginning April 25, after a no-access policy was enforced at the Custodial Center in response to the Covid-19 pandemic.

Until last week, visits were banned at the facility, prompting an outcry from her fellow minority senators as well as human rights advocates. “With total lockdown came total isolation,” De Lima said.

It was only during the Independence Day weekend that the no-access policy eased up. Now De Lima is allowed visitors, but only family members, doctors, lawyers, priests and select staff, and only on set days of the week and under rigid time limits, according to her chief of staff, lawyer Fhillip Sawali.

Journalists are barred from visiting the senator, Sawali said.

Like the 20 other detainees in the complex, De Lima stays in a spartan bungalow-type cottage with a small quadrangle where she maintains a garden, said Sawali, who visited his boss last Tuesday.

To meet guests, De Lima must pass through three tower gates and walk about 150 meters from her cell to a spare receiving area “loaded with CCTVs (closed-circuit televisions).”

Inside her quarters, one will find a single bed, a stand fan, chairs and boxes, a bookshelf, a radio, a cooler and a microwave oven to reheat home-cooked food delivered daily by her staff.

The sun’s heat pierces the metal roofing and worsens her vertigo, but her repeated requests for an air conditioner since 2017 have been unsuccessful, Sawali said.

De Lima has her own toilet and bath, though a tiny one, she said. “No shower. But I’m used to using a tabo (dipper) from my growing years in the province.”

The former justice secretary’s living space also holds over 100 books. The academic Walden Bello gifts her “serious” literature on history, geopolitics and philosophy whenever he visits. But at the moment, she’s enjoying Caleb Carr’s “The Angel of Darkness” and George R.R. Martin’s “Fire and Blood,” a prequel to “Game of Thrones,” she said.

On Saturday afternoons, De Lima is allowed two hours of TV time in the reception area. But she needs to put in a request to watch shows like the Korean series “Crash Landing on You,” Sawali said.

Every morning she gets a copy of the Inquirer and the Star, as well as news clippings, he added.

De Lima rises between 4:30 and 5 a.m., and begins her day with prayers. Then she sits down to compose Senate bills, letters, instructions to her staff, and her signature “dispatches from Crame.” All are written in her neat, spidery longhand.

Incoming and outgoing documents are coursed through the custodians.

“We assume they are all being inspected and read,” Sawali said. “There are eyes everywhere, and she’s the No. 1 critic of the President.”

At 7 a.m. De Lima performs stationary exercises with dumbbells, cleans the compound, takes out the trash and bathes. Then she feeds the cats and eats breakfast.

In her solitude, the cats are a good distraction. “I used to hate cats because I’m a dog lover. Now I adore my cats here. They’re intelligent, sensitive and trainable. And they’re hygienic,” she said. “I can’t imagine my life here without them.” Between 9 a.m. and 11 a.m. she does more paperwork or reads a book. She naps at noon and eats her lunch at 1:30 p.m. Then she waters her plants, prays the rosary, and writes in her journal.

De Lima will be up for reelection in 2022, six years after capturing the last Senate seat with 14 million votes. The year 2022 “will be a landmark year in our history,” she said. “I am sure of it. I am just not sure how it will be remembered.”

Meanwhile, her legal battle continues. In June 2018, the Supreme Court denied with finality her petition that her arrest be voided. Last week, she appealed to the Muntinlupa Regional Trial Court to be allowed to post bail on charges of conspiracy to commit drug trading.

“I have great hopes and equally great fears,” she said.

De Lima’s fate, after all, is indelibly tied to other strong women who have dared challenge the President—and drawn swift, sometimes brutal, reprisals.

Vice President Leni Robredo was forced to quit as housing secretary in December 2016 and fired as antidrug czar in November 2019. Then Ombudsman Conchita Carpio Morales was hit with an impeachment attempt in December 2017.

Ma. Lourdes Sereno was ousted as chief justice in May 2018. Australian missionary Patricia Fox was deported in November 2018 for joining protest actions. And Rappler CEO and executive editor Maria Ressa was convicted of cyberlibel on June 15.