Ombudsman Samuel Martires on Friday said his office ordered the Department of Health (DOH) and the Department of Budget and Management (DBM) to submit documents related to its investigation of the alleged irregularities in the government’s response to the new coronavirus disease (COVID-19) pandemic.

The subpoenas directed Health Secretary Francisco Duque III and Budget Secertary Wendel Avisado to hand over the special allotment release orders of the cash benefits intended for the families of front-liners who died or were infected with SARS-CoV-2, the new coronavirus that causes the severe respiratory ailment, Martires said.

President Duterte was angered by the delay in the compensation, which was mandated by the Bayanihan law.

“We want to know where and how this money was used, and how long it took for the bereaved families of front-liners who died to get cash aid. Where is the money?” Martires told CNN Philippines in an interview.

He said the broader investigation of the government’s response to the pandemic started as a “discreet” probe early in March of the DOH’s treatment of the coronavirus test kit developed by the University of the Philippines National Institutes of Health (UP-NIH).

“We were wondering why the DOH was giving them the cold shoulder, it was as if it was politicized,” Martires said, answering the question of what triggered the investigation.

Instead of buying locally developed and cheaper test kits from UP scientists, the DOH opted to buy 100,000 more expensive test kits from a foreign supplier, he said.

Martires said that Ombudsman investigators were ignored and given the runaround by the DOH.

“We first called the office of Undersecretary Maria Rosario Vergeire. But her executive assistant directed us to call the RITM (Research Institute for Tropical Medicine), which was where Secretary Francisco Duque was holding office,” Martires said.

He said the Office of the Ombudsman merely requested documents, which could be released by a clerk.

“We started before March 15, but the lockdown caught up with us, which was why the investigation was stalled,” Martires said.

In January, the UP-NIH announced that it had developed a kit to test for the virus that was much cheaper than those available in the market at the time.

However, instead of immediately purchasing these kits, the DOH subjected it to multiple tests, Martires said. The UP kits were only approved for use in April. But a month after, in May, the RITM recalled UP’s test kits due to supposed “minor problems” detected during validation, he said.

The DOH then explained that locally developed kits had to pass field validation tests.

Vergeire at that time said that it was the UP-NIH that recalled all of its test kits in order to correct defects identified by the RITM.

Manila HealthTek Inc., which manufactured the UP-NIH kits, had said it was set to deliver to various hospitals kits that were capable of conducting 26,000 tests.

Martires disputed Vergeire’s claim that the investigation would interfere with the DOH’s work in fighting the pandemic.

He said other aspects of the DOH’s coronavirus response would also be investigated by the DOH, including where funds were used. 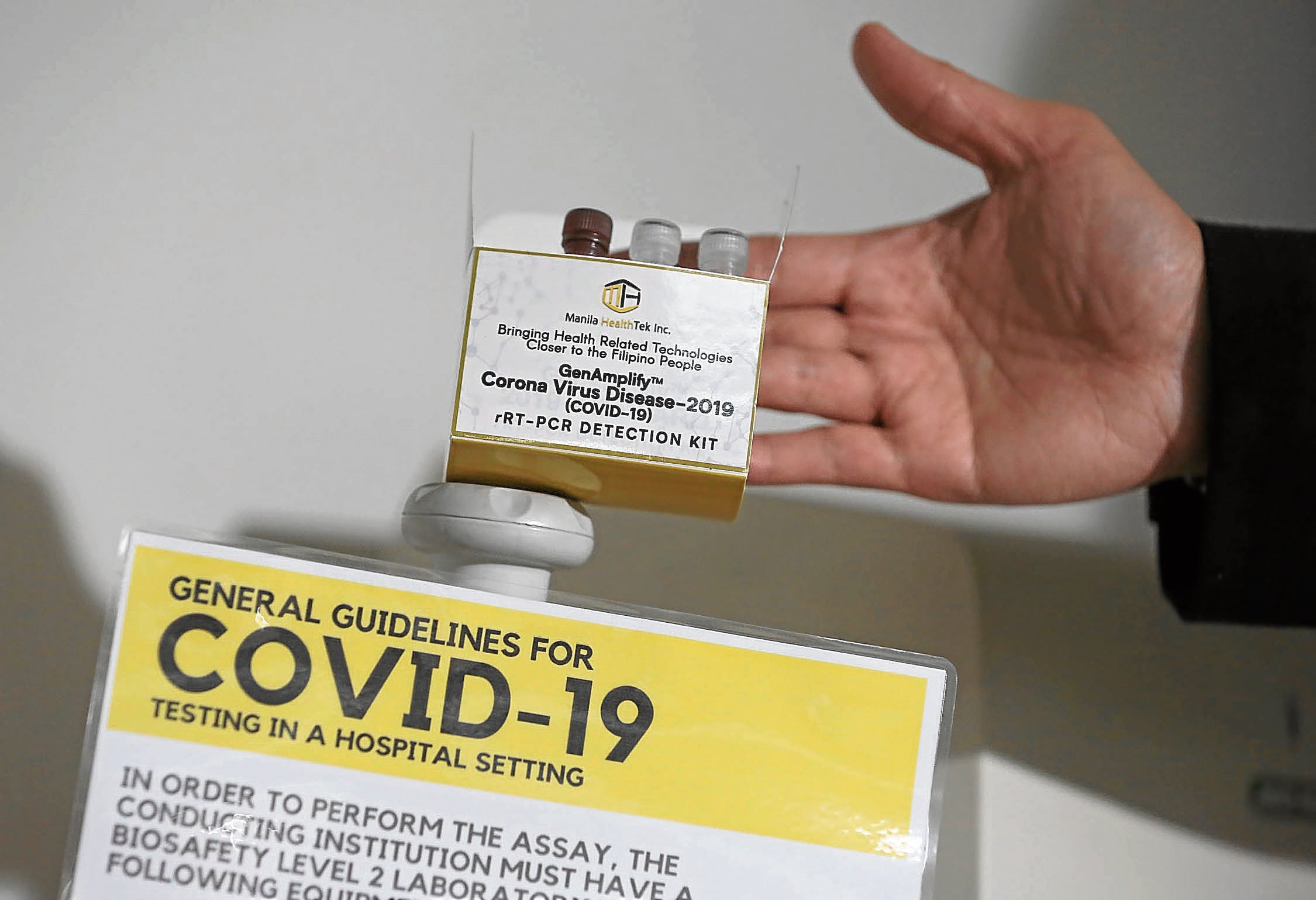 CHEAPER YET IGNORED? Ombudsman Samuel Martires said locally developed kits to test for the new coronavirus was cheaper than those imported and used by the Department of Health (DOH). Why? This prompted an investigation, that has now broadened into a wider probe of the DOH’s response to the COVID-19 pandemic. —NIÑO JESUS ORBETA

Among the issues that the Ombudsman will look into are the DOH’s delayed procurement of personal protective equipment (PPE) for health workers.

Martires said he was not satisfied with how the government was handling the health crisis and that the DOH’s daily tally of cases was not specific enough, which was suspicious.

“The way things are going, it is as if they are hiding something,” he said.

Vergeire, the DOH spokesperson on matters related to COVID-19, on Friday said health officials would cooperate with the Ombudsman’s investigation.

In an online briefing, she said they have not yet received any “formal communication” from the Ombudsman but added that “we are now preparing for this.”

“If they think they were given the runaround, we were just observing processes … because it was referred to the concerned unit of the DOH,” Vergeire said.

Despite the low morale among DOH employees caused by the Ombudsman’s investigation, Vergeire said Duque still enjoyed their “full support.”

“We do not see the need yet for him to resign or to temporarily stop working to give way to this investigation,” she added.

To ensure an impartial probe, Sen. Sherwin Gatchalian urged Duque on Thursday to go on leave, saying that would be the “most appropriate thing” for the health chief to do.

Senate President Vicente Sotto III on Friday said Duque should shield the President from corruption allegations by stepping down.

“It’s his call. He should save the President from any predicament or responsibility [regarding] his tenure,” Sotto said in a Viber message.

“If he cares for the President, he should spare the President the agony and trouble of deciding … what to do with him,” he added.

However, Vergeire said health officials were only able to perform their jobs because of Duque’s leadership.

“I hope people will understand that the undersecretaries are able to do their job because we have a leader like Secretary Duque. A leader is very important in an organization because even if he just sits there but is respected and is able to give confidence to his people, I think those under him become good at their jobs,” Vergeire said. —REPORTS FROM PATRICIA DENISE M. CHIU, JOVIC YEE AND MARLON RAMOS