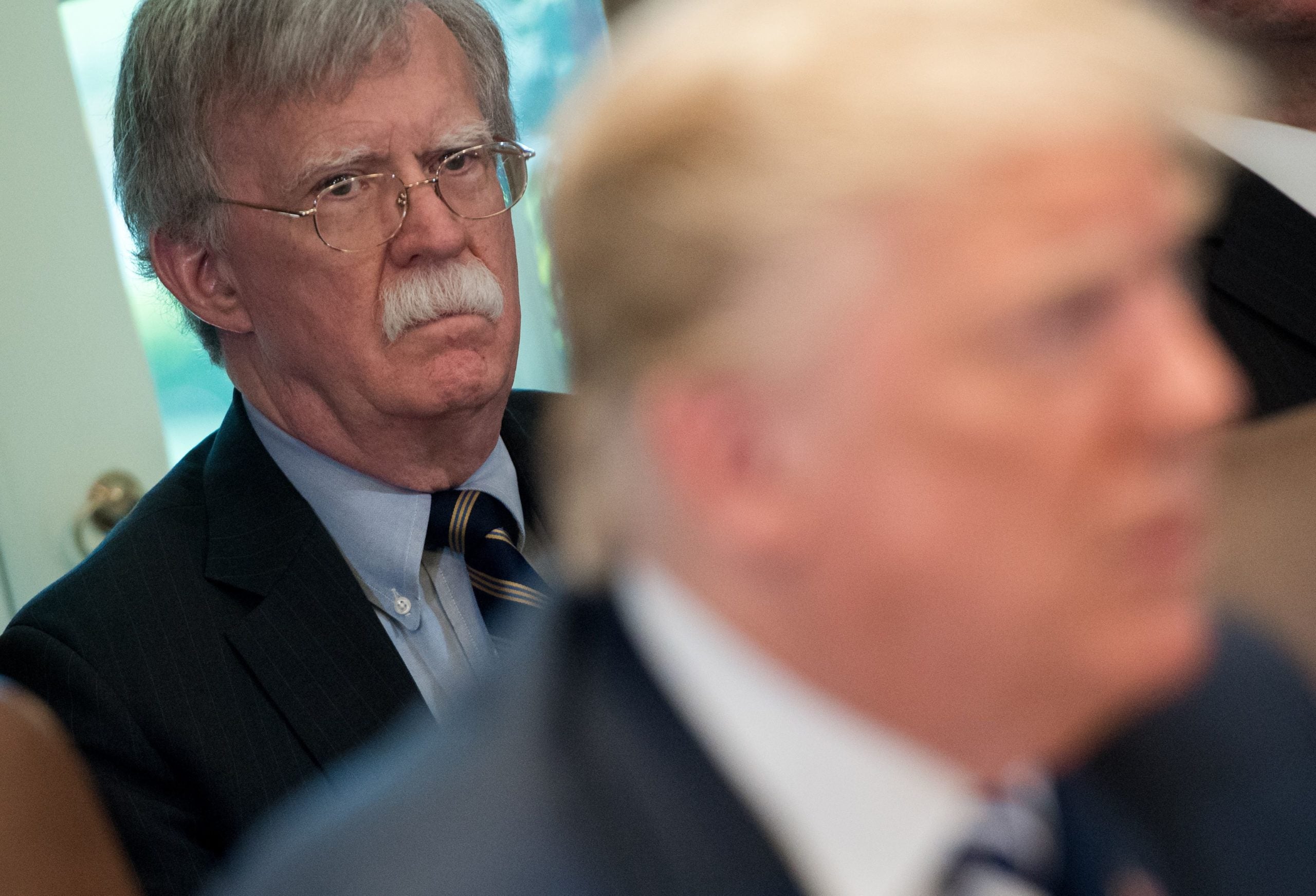 SHAKY TENURE US President Donald Trump speaks alongside National Security Adviser John Bolton (behind) during a Cabinet meeting in this photo taken on May 9, 2018. Bolton spent 17 months in the White House before resigning in September 2019 and is due to come out with a behind-the-scenes book on Trump’s highly controversial administration. —AFP

Bolton alleges in a blistering critique that Trump’s focus on winning a second term was the driving principle of his foreign policy—and that top aides routinely disparaged the Republican leader for his ignorance of basic geopolitical facts.

Excerpts of the upcoming book, “The Room Where It Happened,” have been published by The Washington Post, The New York Times and The Wall Street Journal.

“I am hard-pressed to identify any significant Trump decision during my White House tenure that wasn’t driven by reelection calculations,” Bolton writes of the real estate magnate turned president, who was impeached in December for seeking dirt from Ukraine on his 2020 Democratic election rival Joe Biden.

In a key meeting with Xi last June, Trump “stunningly turned the conversation to the US presidential election, alluding to China’s economic capability to affect the ongoing campaigns, pleading with Xi to ensure he’d win,” Bolton claims in his tell-all.

Bolton writes that Trump stressed the importance of US farmers and how “increased Chinese purchases of soybeans and wheat” could impact the US electoral outcome.

“I would print Trump’s exact words but the government’s prepublication review process has decided otherwise,” Bolton says, referring to the requirement months ago that he have his manuscript vetted by US agencies.

In a sign of Trump’s anger over the memoir, the Justice Department filed an emergency order late Wednesday seeking a halt to publication, the second time in as many days it has tried to block the book.

Arguing that Bolton failed to allow completion of the vetting, the department urged the court to take action to “prevent the harm to national security that will result if his manuscript is published to the world.”

He also derided his former adviser, a veteran Washington insider, as “washed up,” and mocked Bolton’s past support for the US war in Iraq.

In the released excerpts Bolton said that by intervening in cases involving major firms in China and Turkey, Trump appeared to “give personal favors to dictators he liked.”

He describes “obstruction of justice as a way of life” in the White House, and says he reported his concerns to Attorney General William Barr.

The book is due for release next Tuesday, in the thick of a presidential campaign against Biden.

The former vice president said that Bolton’s revelations show Trump “sold out the American people to protect his political future.”

“If these accounts are true, it’s not only morally repugnant, it’s a violation of Donald Trump’s sacred duty to the American people to protect America’s interests and defend our values.”

The conservative Bolton, himself a controversial figure in US politics, spent 17 turbulent months in the White House before resigning last September.

He declined to testify during the December impeachment process in the House of Representatives, then said in January he would testify in the Senate trial if he were issued a subpoena.

Senate Republicans blocked such an effort by Democrats.

Bolton did not explicitly say whether Trump’s newly revealed actions amounted to impeachable conduct but argued that the House should have investigated them.

He also said Democrats committed “impeachment malpractice” by limiting their inquiry to “the Ukraine aspects of Trump’s confusion of his personal interests.”

Had they looked more widely, Democrats might have persuaded Republicans and other Americans that “high crimes and misdemeanors” had been perpetrated, he wrote.

Bolton depicts a chaotic White House in which even seemingly loyal top aides mocked the president—while Trump himself allegedly ignores basic facts such as Finland being distinct from Russia.

During Trump’s 2018 summit with North Korea’s leader, according to excerpts, Secretary of State Mike Pompeo slipped Bolton a note maligning the president, saying “He is so full of shit.”

Several behind-the-scenes books have emerged in recent years alleging damning Trump details, but Bolton is the highest-ranking official to write one.

Another potentially damaging take looms, this time from within Trump’s family.

The president’s niece, Mary Trump, releases her memoir, featuring the scathing title “Too Much and Never Enough: How My Family Created the World’s Most Dangerous Man,” on July 28.

Trump has sought to halt the books, but constitutional experts told Agence France-Presse (AFP) it would be unlikely for courts to block their publication.